A weather phenomenon known as a bomb cyclone has begun to hit the east coast, leaving over 100,000 people in Massachusetts without power Saturday morning.

A bomb cyclone is a rapidly intensifying storm with a significant drop in atmospheric pressure, also called a nor’easter. During this time of year, it is typically characterized by heavy snow and wind gusts comparable to hurricane force. Blizzard warnings were issued in parts of 10 states Saturday morning, according to Fox News.

Governors in Virginia, New York, New Jersey, Delaware and Maryland all issued States of Emergency Friday, according to The Hill. (RELATED: ‘Bomb Cyclone’ Could Hit US, Bringing Massive Storm With Intense Winds)

“Out of an abundance of caution I am declaring a State of Emergency today as this storm is poised to create dangerous travel conditions, heavy snowfall rates and sustained winds over 50 mph tonight into Saturday,” New York Governor Kathy Hochul in a statement Friday. “My team and I are laser focused on the forecast and we’ve been deploying emergency response assets ahead of the storm to assist with response efforts in the downstate areas.” 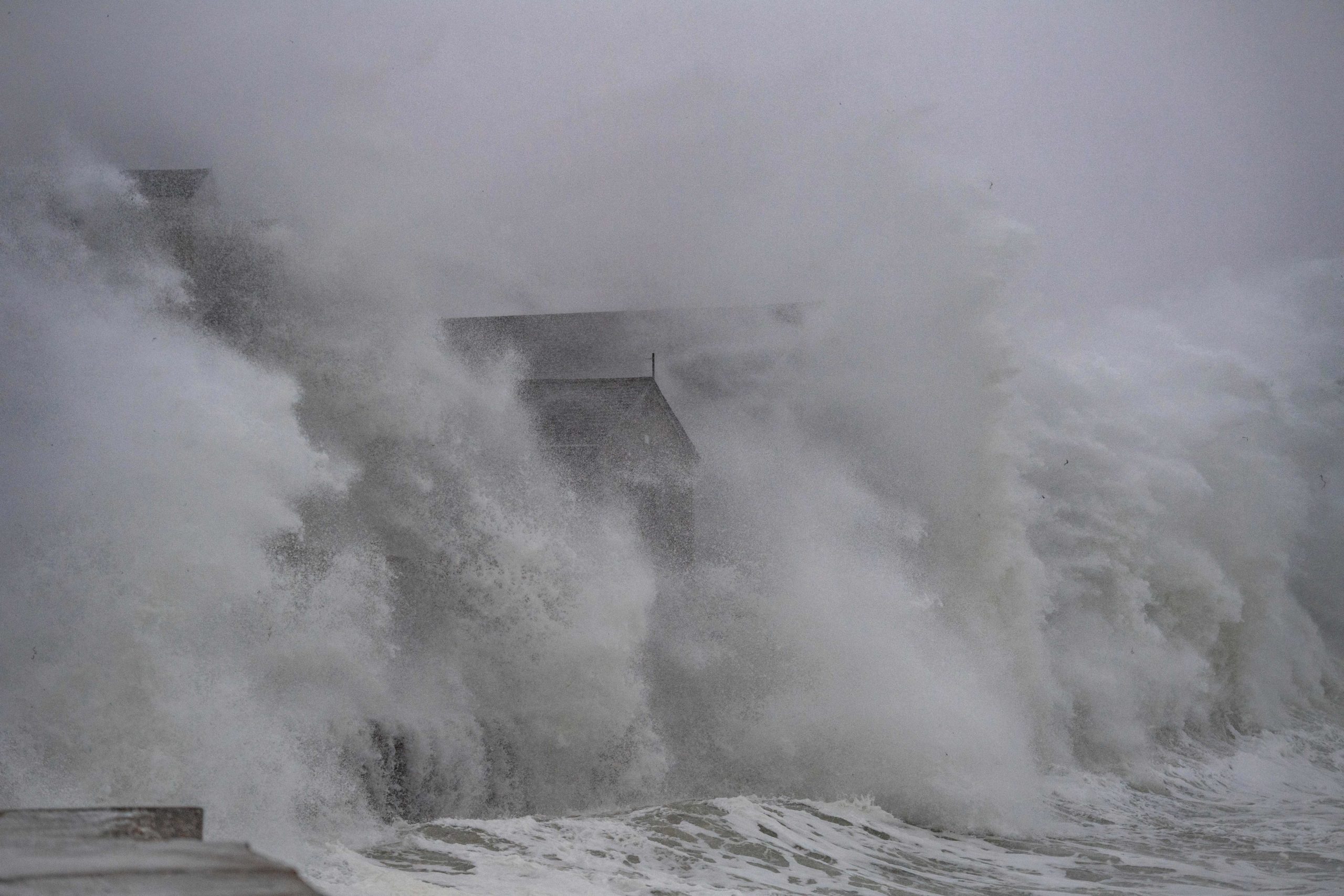 Waves crash over oceanfront homes during a nor’easter in Scituate, Massachusetts, on January 29, 2022. – Blinding snow whipped up by near-hurricane force winds pummeled the eastern United States on January 29, as one of the strongest winter storms in years triggered severe weather alerts, transport chaos and power outages across a region of some 70 million people. (Photo by JOSEPH PREZIOSO / AFP) (Photo by JOSEPH PREZIOSO/AFP via Getty Images)

Approximately 115,000 people are without power in Massachusetts, according to poweroutage.us, and the state is bracing for more than 20 inches of snow. Areas closest to the coast will reportedly experience intense winds, with gusts reaching as high as 70 mph in New England, per Fox News.

Customers of National Power Grid in Nantucket, MA, had the highest outage rate, according to Boston Herald.

“We have nearly 900 line and tree crews working across the commonwealth to restore power as quickly [and] as safely as possible to our customers, including out-of-state crews from as far away as Florida and Michigan,” William Hinkle, a spokesman for the power utility, said in a statement.

A tweet from Nantucket police shows flooding in the downtown area.

Significant flooding downtown in the Easy St area. Easy St is closed for the time being. #nantucket pic.twitter.com/sRPtZxtNrp

In a statement issued for immediate release Thursday, Virginia Governor Genn Youngkin said that they have “already started planning and mobilizing resources needed to protect the Commonwealth. We are very concerned with the forecasted impacts to our Eastern Shore region and have started pre-positioning resources to ensure a timely response to that area. The most important thing everyone can do to minimize the risks is to prepare yourself and your family.”