With the Olympics in full swing, Chinese state-run media outlets have deflected criticism away from the human rights record of the People’s Republic of China (PRC) by shifting focus to America’s sins, whether real or imagined.

The latest instance came on Feb. 11, 2022, in a People’s Daily piece criticizing the continued existence of the Guantanamo Bay detention facility and a China Daily cartoon taking aim at America’s “for-profit prisons.”

While the article condemning Guantanamo Bay lays blame on America’s “secret jails” for allegedly obtaining a “false” justification for the Iraq War through “torture,” the cartoon depicts a caricature of a cigar-smoking capitalist observing a domestic prisoner sewing garments, the caption reading: “American private prisons turn prisoners into money-growing trees.”

A related China Daily article from the same day labeled “for-profit prisons” in the U.S. “modern slavery,” stating, “It is no secret that the U.S. government and private prison systems profit hugely under the guise of justice — just another proof of U.S.’s decaying system and hypocrisy of its style of democracy.”

People’s Daily and China Daily made no mention of the PRC’s newly built detention centers accused of arbitrarily incarcerating ethnic Uyghurs and other minority groups. (RELATED: The CCP Is Weaponizing Woke Rhetoric Against The Biden Administration)

PRC Minister of Foreign Affairs Zhao Lijian criticized the human rights record of the U.S. on Jan. 18 in response to an alleged CIA program, which is claimed to have conducted auditory experiments on Danish children. [YouTube/Screenshot/CGTN]

A related China Daily article claims such an experiment would invariably violate the 1947 Nuremberg Code, which outlines “standards to which physicians must conform when carrying out experiments on human subjects,” including receiving a subject’s “voluntary consent.”

China’s Foreign Ministry spokesman Zhao Lijian addressed the situation during a January 2022 presser saying, “The CIA’s human rights violations around the world are no news, but it is still shocking to learn that they even preyed on children.”

Zhao then made reference to the CIA’s “mind control project,” Project MKUltra, which, according to a report from the 1977 Joint Hearing Before The Select Committee on Intelligence, included the administration of LSD to “unwitting citizens at all social levels, high and low, native Americans and foreign” for the sake of “behavioral control.”

Zhao said the CIA “hired Nazi German doctors and war criminals from Unit 731 of the Imperial Japanese Army and applied electroshock and high doses of LSD to conduct brainwashing experiments around the world,” before adding “the U.S. government always talks about ‘human rights’ and ‘democracy,’ but it doesn’t practice what it preaches.”

Neither CCTV nor Zhao made mention of the PRC’s organ harvesting operations. (RELATED: Olympic Committee Called Out For Blowing Off China Rights Group) 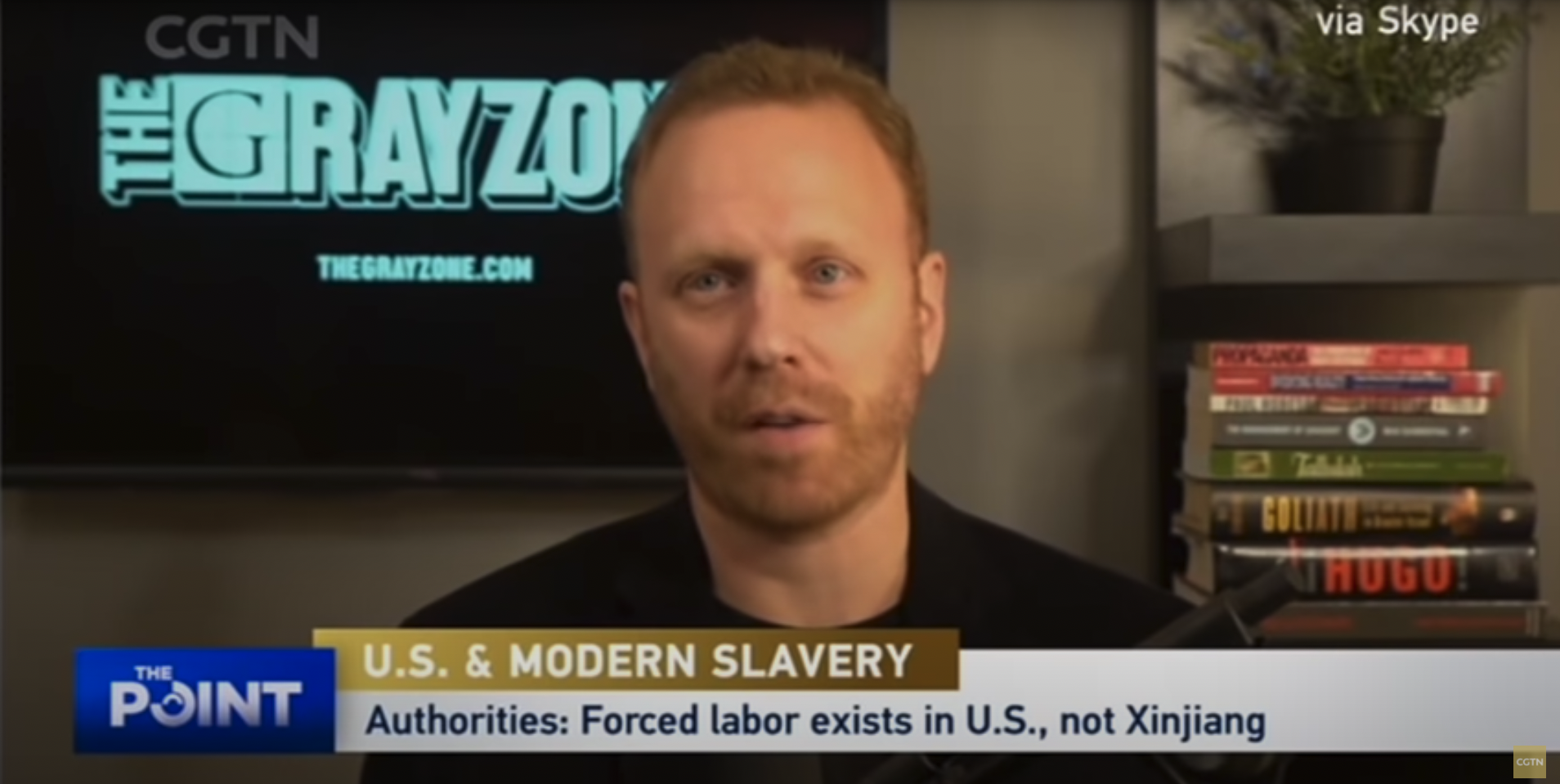 Chinese state media, CGTN, ran a special in December 2021, seeking to undermine the passage of the Xinjiang Forced Labor Prevention Act, which featured Max Blumenthal of The Grayzone website. [YouTube/Screenshot/FrontlinePBS]

In a Dec. 28, 2021 special entitled “U.S. and Modern Slavery,” American editor of The Grayzone website and recurring collaborator with CGTN, Max Blumenthal, aided Prof. Victor Gao of Suzhou University in attacking the legitimacy of the Uyghur Forced Labor Prevention Act by criticizing the various studies which underpin the act. Blumenthal also countenanced the notion slave labor in the U.S. outstrips the PRC’s.

Neither CGTN nor Blumenthal made mention of the PRC’s long-standing láogǎi, or “re-education through labor system,” which according to the Laogai Foundation has seen over 50 million prisoners enslaved. (RELATED: POLL: Democrats More Concerned About COVID Outbreak At Winter Olympics Than China’s Human Rights Violations)

In October 2021, Chinese state media, CGTN, interviewed American film director Oliver Stone, who downplayed the historical threat of the Soviet Union, lamented racism in the U.S., likened the U.S. military to the Germans “after World War I,” called American news “propaganda,” rejected the idea Huawei was a danger, and also called “accusations” about the Uyghur genocide “insane,” saying there was “no proof.” [YouTube/Screenshot/CGTN]

Oliver Stone appeared on CGTN in an October 2021 interview, where the Academy Award-winning film director of “Platoon” disparaged America’s military tradition and exonerated the PRC from culpability in the Uyghur genocide.

Asked to comment on America’s global posture in the wake of Biden’s Afghanistan withdrawal, Stone said, “In the last two years of Trump it was China. China was always in the news. China was the bad guy. It’s very childish what’s going on, but the United States has control over its news, and often its news is propaganda. So we started to hear about the Chinese.”

“Huawei was a bad guy and 5G was going to be taken over by the Chinese. Again, this was the same thing as the mind warfare of the 1950s where communism was going to take over, now it’s 5G,” said Stone. “Obviously, in China, same thing with the labor system in Xinjiang. They were making all these accusations about genocide, which was insane, because there was no proof of it. It was propaganda.”

During the interview Stone also passed judgment on the Korean War while commenting on the PRC’s highest-grossing film to date, “The Battle at Lake Changjin,” a propaganda piece set during the war’s legendary Battle of Chosin Reservoir.

Stone called the Korean War “a bloody, bloody ridiculous war and unnecessary, because it essentially came out of the fear of communism.”

Stone made no mention of the fact the Korean War was begun when the communist North invaded the South, nor did he comment upon the existence of state-controlled news in the PRC or North Korea.

In the run up to the Olympics Chinese state-run media have also attacked America’s human rights record on issues such as Black Lives Matter and police brutality, Operation Northwoods, Operation Mockingbird, African slavery, Europe’s colonization of America and both the Yinhe and Gulf of Tonkin Incidents. (RELATED: DANIEL: China’s Biggest Movie Ever Is Actually A National Embarrassment, And American Media Helped Them Cover It Up)