As the threat of Russian invasion looms over Ukraine, the country’s young generation is preparing in every way they know how.

Kyiv is bustling with people flocking to grocery stores and gas stations to stock up on last-minute supplies, Diana Vlasenko, an 18-year-old university student from the outskirts of Kyiv, told the Daily Caller. Russia has amassed over 130,000 troops at the border, consistently claiming that it has no plans to attack. Ukrainian President Volodymyr Zelensky has echoed this sentiment, urging for Ukrainians to remain calm in the midst of the threat, and calling for a day of Unity on Wednesday, the day President Joe Biden reportedly said there would be an invasion.

Other than the noticeable increase in traffic, the general atmosphere is calm in the capital of Ukraine. The difference, Vlasenko said, is some people are leaving the city and the heightened level of anxiety people are facing within. 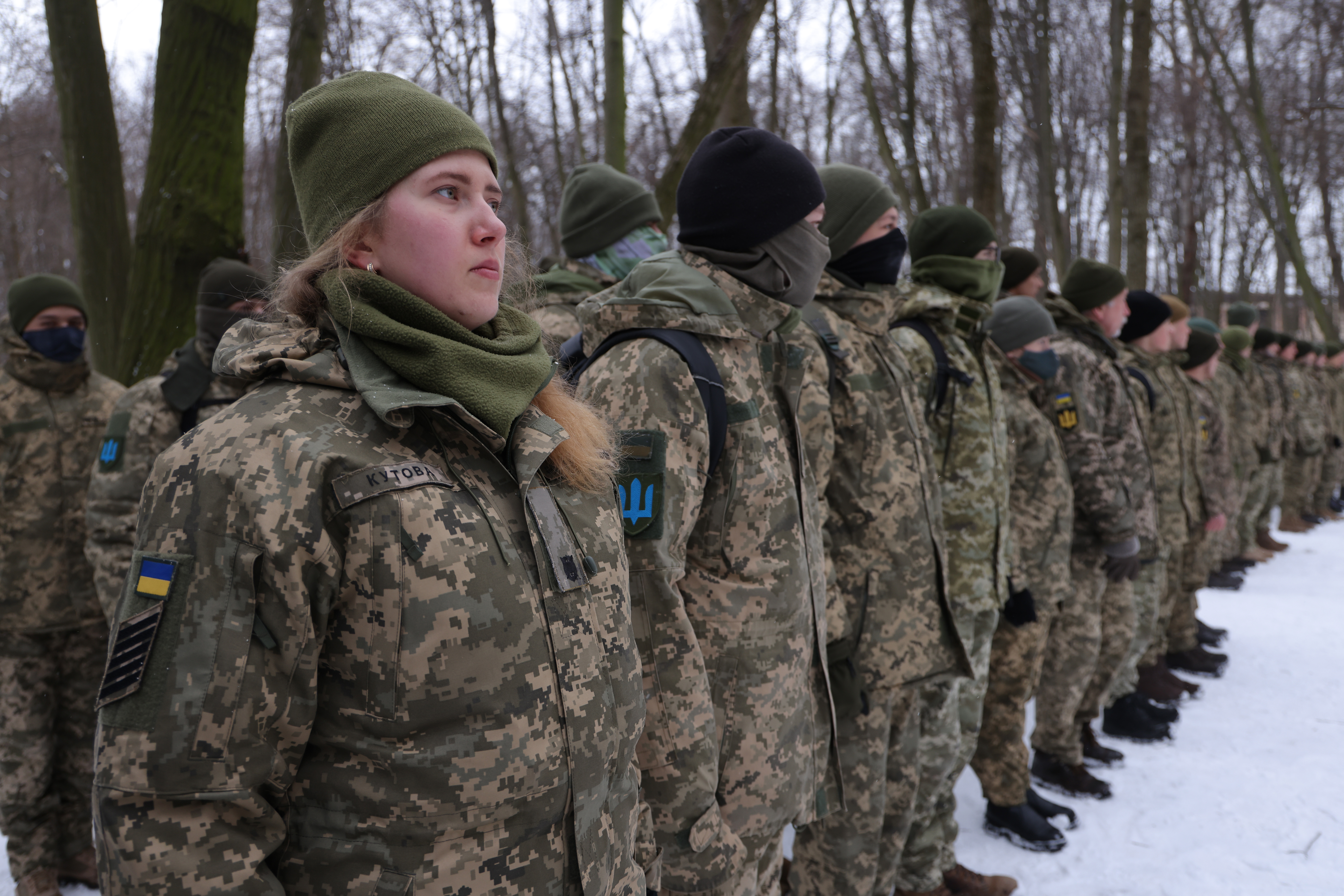 KYIV, UKRAINE – JANUARY 22: Civilians, including Tatiana (L), 21, a university veterinary medicine student who is also enrolled in a military reserve program, participate in a Kyiv Territorial Defence unit training on a Saturday in a forest on January 22, 2022 in Kyiv, Ukraine. Across Ukraine thousands of civilians are participating in such groups to receive basic combat training and in time of war would be under direct command of the Ukrainian military. While Ukrainian officials have acknowledged the country has little chance to fend off a full Russian invasion, Russian occupation troops would likely face a deep-rooted, decentralised and prolonged insurgency. Russia has amassed tens of thousands of troops on its border to Ukraine. (Photo by Sean Gallup/Getty Images)

“Many [of my friends] went to Italy, to the west of Ukraine,” to see their family, she said, out of fear of invasion. “I’m worried, actually. I can’t believe Russia” claiming that it has no plans to invade, because in 2014, they annexed Crimea and invaded Eastern Ukraine, she continued. (RELATED: US Moves Ukraine Embassy Out Of Kyiv Due To ‘Dramatic’ Russian Troop Buildup)

“I don’t know exactly [where I would go] if there was an invasion,” Vlasenko said, explaining that her family lives in Odessa in southern Ukraine, and that would also likely be under attack.

“It feels like something is going to happen. There is something in the air,” he told the Daily Caller, saying that in the event of invasion, he plans to go to work in a hospital.

“At first I wanted to grab a gun and go to the front lines, but then I just thought that wouldn’t be very useful … If something starts I will go to the hospital and work there. I would be more useful there.”

Young Ukrainians are joining the army and the newly formed volunteer militias across the country. The Territorial Defense Force was legally established Jan. 1, and the government has recently announced a speedup of “the formation of 25 Territorial Defense Force brigades, which will be made up of over 150 battalions in total,” as a reserve army, according to The Kyiv Independent. Applicants have to be over 18-year-old, and are given weapons only during training exercises. The government hopes to have 130,000 soldiers ready to fight once fully mobilized, according to the outlet. (RELATED: Teachers, Accountants And Priests: Ukraine Training A Civilian Army To Fend Off Russian Invasion)

In Lviv, like in Kyiv, most things seem normal. There are tourists, people go to work, nothing has really changed, Sheiko said. However, he said, some shopping malls make announcements about what to do in the event of shelling.

“I don’t think we should just panic, since that’s what Russia wants us to do.” If Russia doesn’t invade, they are posturing so Russian President Vladimir Putin seems like a hero “against an outside enemy,” Sheiko said. (RELATED: Airlines Rerouting Flights To Avoid Ukraine Airspace, Battling With Insurance Companies As Potential Russian Invasion Looms)

“I think [Americans] should know that we are ready to fight, to protect our country, to protect what we love,” he concluded.

The increase in national pride among young Ukrainians in the wake of Russian aggression is a common thread. Use of the Ukrainian language has expanded since 2014 and the Maidan Revolution, particularly for those aged 18-29 due to quotas in media coverage and education requirements. The potential conflict this time around will likely continue the rise in national fervor, according to Liza Shligerska, a Cornell University student from Kyiv.

“I personally realized what Ukraine is for me — that it’s not just my home … it’s not my soul, but it’s my identity. The blind idea of losing it, gives you a lot of realization and values,” Shligerska told the Daily Caller. “My biggest hope for American college kids is to know that Russia and Ukraine” are not the same, and for them to know what “values Ukraine has and is trying to protect in this conflict.”

When asked what she has been doing to prepare for the war while away from her family, she said, “My life changed more mentally rather than physically. I don’t think there is anything that can be done to prepare for a war … My family just hopes that the war won’t make it to Kyiv.”

Maryna Sysa, a 23-year-old Kyiv resident, echoed Shligerska’s sentiments, stating that she has nowhere to “hide.”

“I will stand for Ukraine and do everything to stop these stupid political games,” Sysa said. “I want Americans to know that Ukraine and Russia [are] not the same … I want them to know that we have had a war for eight years, where people are dying almost every day,” and Crimea is still occupied.

As far as the reactions to the possible invasion, Sysa said everyone is different — some of her friends are taking sedative pills to fight anxiety, her office is giving training on what to do for a possible attack, some are moving abroad — but war is on everyone’s mind.

There will be an “incredible” impact on Ukraine’s psychology for its younger generation, Sysa said. “The war, changes in government and occupation made us huge patriots of our country. All these events that happened throughout this decade completely transformed [our] mindset and beliefs. We feel united, we feel that we can change the stale system and make it work for people.”