The Supreme Court rejected a petition from the Dakota Access oil pipeline operator Tuesday to end the ongoing environmental review into the project.

The high court’s decision turning down the request partially upheld a federal district judge’s July 2020 ruling that ordered the U.S. Army Corps of Engineers to prepare a full environmental impact statement (EIS) on the pipeline. The lower court ruling also required Dakota Access pipeline (DAPL) operator Energy Transfer to shut down operations of the pipeline within 30 days, but an appeals court nixed that part of the ruling in August 2020.

While the pipeline, which transports an estimated 570,000 barrels of crude oil per day from North Dakota to Illinois, remains operational, Energy Transfer has argued that the threat of a sweeping EIS and potential shutdown has created uncertainty for its future. The company asked the Supreme Court to review its case and cancel the environmental review in a September court filing.

“DAPL’s ongoing operation thus remains uncertain, with a substantial risk of a shutdown,” the company wrote. “This Court should intervene to eliminate this uncertainty and, by reversing the panel decision, restore Dakota Access’s easement in order to ensure its continued operation and avoid the economic and environmental fallout of a shutdown.” 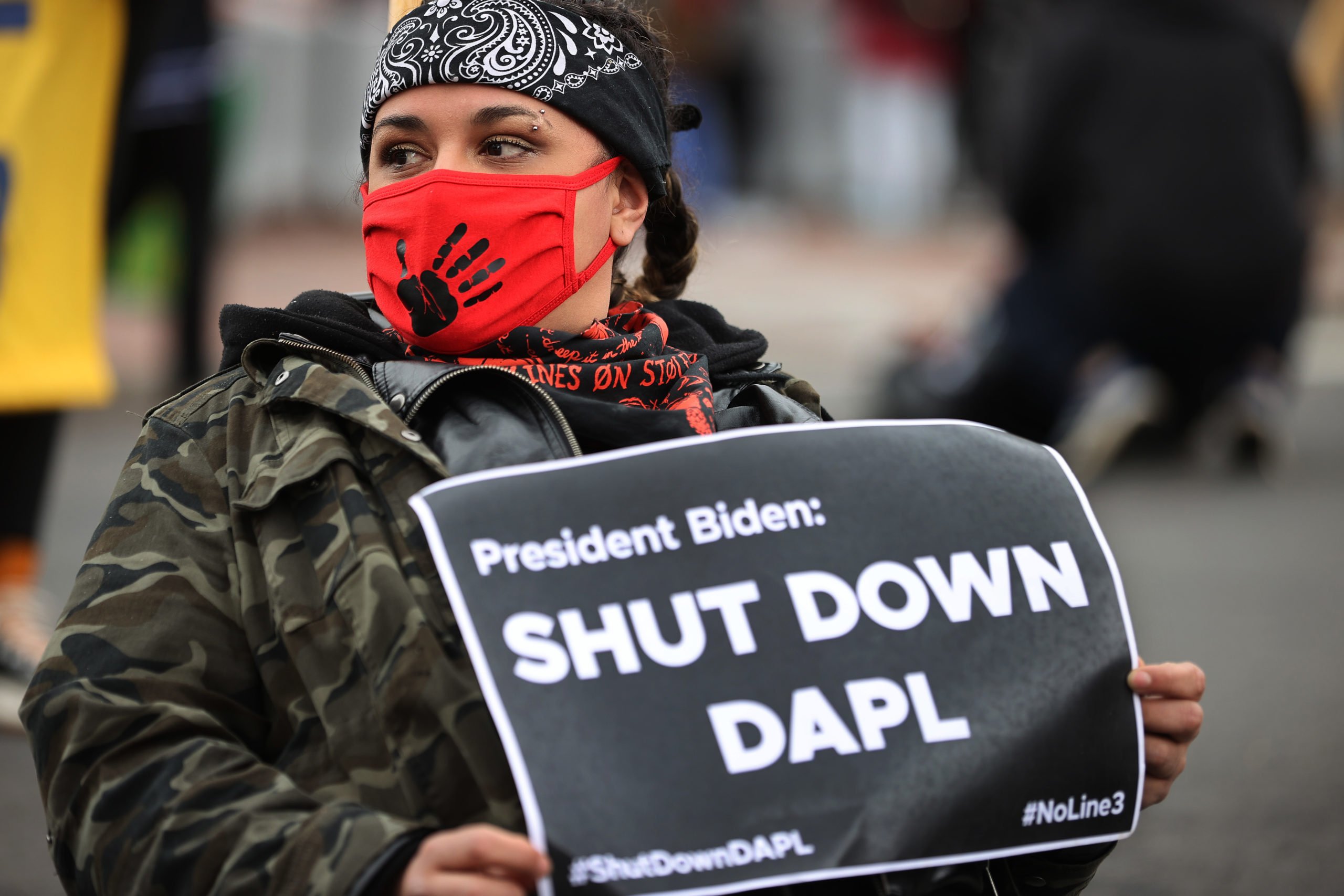 An indigenous environmental activist helps block traffic near the White House as part of a protest against the Dakota Access pipeline on April 1, 2021. (Chip Somodevilla/Getty Images)

The Biden administration opted against canceling the DAPL in April, electing to instead wait for the final environmental review. Environmental groups and Native American tribes, which filed the legal challenge against the Trump administration over the pipeline approval, strongly criticized the decision to allow the DAPL to continue operations.

“We are gravely concerned about the continued operation of this pipeline, which poses an unacceptable risk to our sovereign nation,” Mike Faith, chairman of the Standing Rock Sioux Tribe, said in a statement. “In a meeting with members of Biden’s staff earlier this year, we were told that this new administration wanted to ‘get this right.’”

“Unfortunately, today’s update from the U.S. Army Corps of Engineers shows it has chosen to ignore our pleas and stick to the wrong path,” Faith added. (RELATED: US Set To Again Become Net Importer Of Oil)

The DAPL has been the subject of many protests from activists and Hollywood celebrities alike. Environmentalists have argued the pipeline could leak, causing significant damage to tribal lands and water sources it crosses beneath.

But Energy Transfer has countered, saying the pipeline is “one of the most technologically advanced and safest pipelines” ever built and doesn’t cross Native lands. The company has also argued that the pipeline doesn’t affect any water source.

The U.S. Army Corps of Engineers’ EIS is expected to be completed by September 2022.