Educators at the Iowa City Community School District were encouraged to participate in equity courses that focused on the culture of mathematics, “Herstory,” and queer history, according to documents obtained by a concerned parents organization.

Staff in the district were given a handful of optional training courses to undergo, including programs called “Ethnomathematics: The Study of Math as a Cultural Activity” and “WE ARE EVERYWHERE: Paris is Burning.” The so-called “Ethnomathematics” course examines “mathematics teaching and learning through a cultural lens,” according to documents obtained by Parents Defending Education.

“Educators will approach the mathematics classroom as ethnographers, exploring the origins of our current practices and questioning the hierarchies they produce,” the course description reads.

One training course, titled “Paris is Burning,” examines “protest, power, and pride in queer history and culture. Learners will explore often forgotten Herstory and ideas of intersectionality and discuss topics of race, sexuality, class, and gender discussion focusing on LGBTQIA+,” according to the documents. 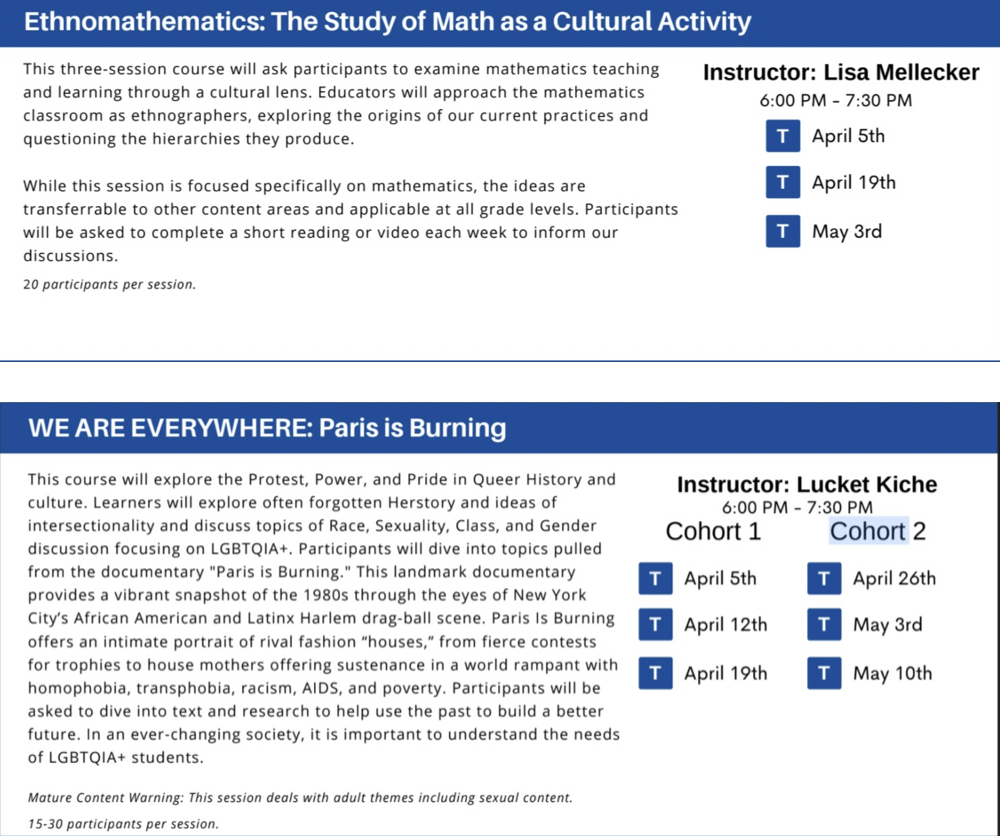 The district also offered equity courses on “Decentering the Educator in the Classroom” and “Analyzing Systems of Behavior and Discipline.” (RELATED: Seattle-Based Researchers Publish Study On ‘Whiteness’ In Introductory To Physics Classes)

Erika Sanzi, the Director of Outreach for Parents Defending Education, argued that ethnomathematics and queer history do not improve student outcomes in comparison to focusing on math and history.

“Teachers do not need to pretend to be ethnographers and study math through a cultural lens. They need to be able to teach students the math they need to know to pursue and succeed in the future whether in higher ed and/or career paths that require that knowledge,” Sanzi said. “And who is footing the bill for these ideological trainings in ethnomathematics and queer history? What evidence is there that any of this has a positive impact on student outcomes? Short answer: there isn’t any.”

Iowa City Community Public Schools did not respond to the Daily Caller’s request for comment.