“The full return of the NBA to China shows, once again, how money has become, as ever, a new religion in the era of globalization,” Dr. Mamtimin Ala, a Uyghur representative of the unrecognized East Turkistan Government-in-Exile (ETGE), told the Daily Caller News Foundation on Friday.

Salih Hudayar, the elected prime minister of ETGE, told the DCNF Uyghurs were frustrated with American and Western corporations, who, despite being shown significant evidence demonstrating China’s culpability in committing genocide, were nonetheless eager to “put profit over principles” and do business with the authoritarian nation.

“The NBA has shown its hypocrisy and willingness to ignore China’s genocide and crimes against humanity,” Hudayar said on Friday. “The problem is, it’s not just the NBA, but also Disney and other companies who hold a double standard on China’s genocide of the Uyghurs versus Russia’s invasion of Ukraine.”

The Daily Caller News Foundation reached out to the NBA, but the league did not immediately respond for comment.

China notified the NBA it would resume broadcasts less than 24 hours before the game was to be played, according to a New York Times report. (RELATED: Below Their Lines: American Corporations Cancel Russia But Remain Silent On Uyghur Genocide) 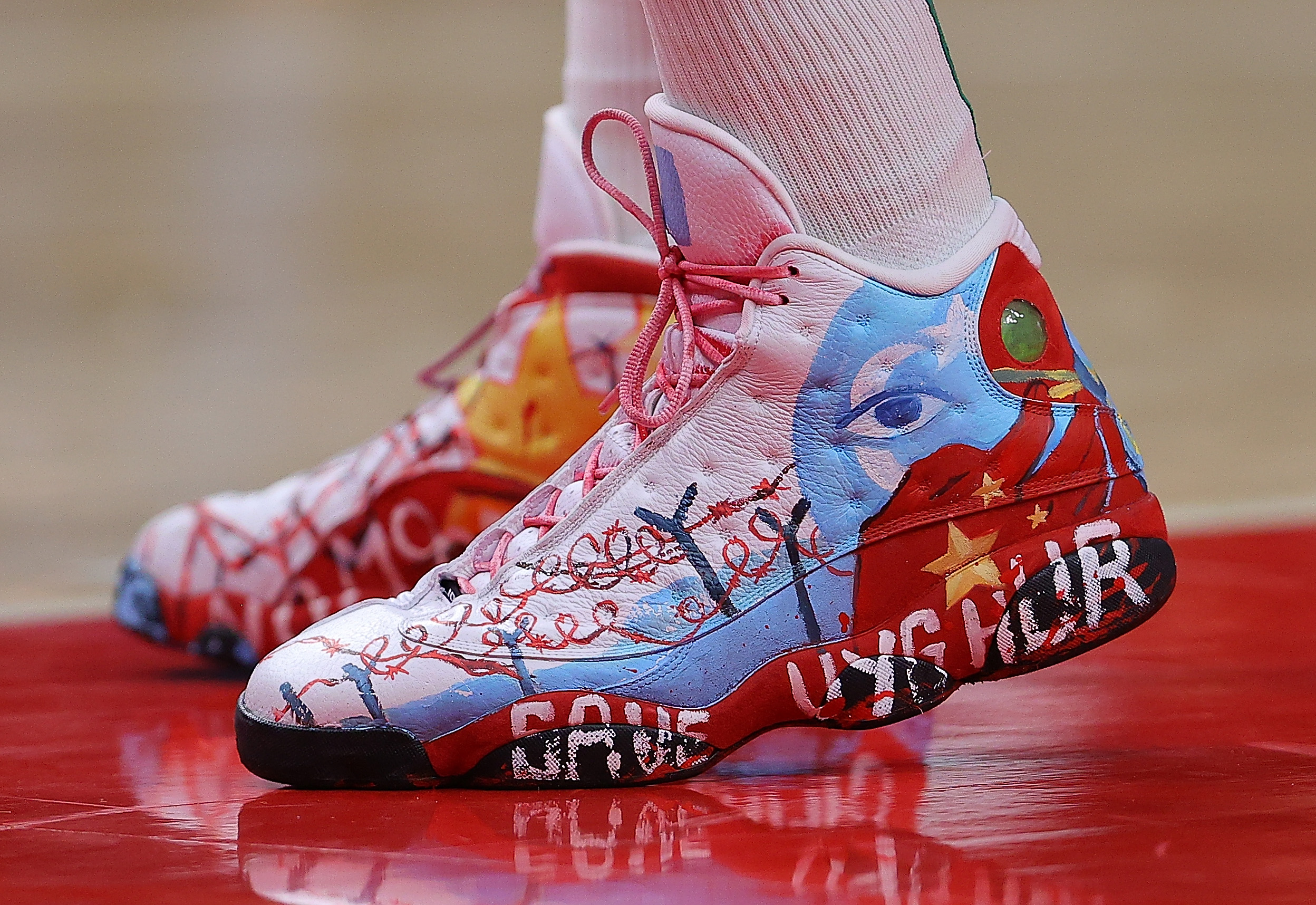 ATLANTA, GEORGIA – NOVEMBER 17: A view of the shoes worn by Enes Kanter #13 of the Boston Celtics against the Atlanta Hawks during the first half at State Farm Arena on November 17, 2021 in Atlanta, Georgia. NOTE TO USER: User expressly acknowledges and agrees that, by downloading and or using this photograph, User is consenting to the terms and conditions of the Getty Images License Agreement. (Photo by Kevin C. Cox/Getty Images)

Morey’s tweet, “fight for freedom, stand with Hong Kong,” offered support for protestors who opposed the 2019 Fugitive Offenders and Mutual Legal Assistance in Criminal Matters Legislation Bill, which would have allowed for the extradition of supposed “criminals” to China proper.

“The problem is, there are certain topics that are third-rail issues in certain countries, societies and communities,” Tsai wrote in an open letter referencing Morey’s comment. “Supporting a separatist movement in a Chinese territory is one of those third-rail issues, not only for the Chinese government, but also for all citizens in China.”

James also challenged Morey, saying the general manager “wasn’t educated on the situation at hand,” before adding “many people could have been harmed not only financially, but physically, emotionally, spiritually.”

Citing “personal reasons,” Morey ultimately left the Rockets in October 2020, according to ESPN.

While China’s censors are reportedly giving NBA games a “full return,” as opposed to a “temporary one,” according to the state media report, “the number of games broadcast will not be as many as before, and no more outside guest commentators will be invited,” former NBA reporter, Li Shuangfu, told the Global Times.

Furthermore, Boston Celtics and Philadelphia 76ers games are not at present slated to be broadcast, according to the Global Times report.

The Chinese state media report suggests that the 76ers and Celtics are not being broadcast because Morey had become general manager of the 76ers, while the outspoken China critic, Enes Kanter  Freedom, was a former center for the Celtics. (RELATED: ‘Genocide’ And ‘Eugenics’: Bipartisan Commission Releases Stunning Human Rights Report On China)