Asian-Americans are switching to the Republican party as the 2022 midterms loom, “waking up” to the Democratic Party promoting discrimination in school acceptance policies, among a slew of other factors.

“Asian American families want the same things as any other family in this country – the opportunity to work hard, live in a safe community, a provide the best life for their children,” Nikki Haley, ambassador to the U.N. under former President Donald Trump and former governor of South Carolina, told the Daily Caller.

“That’s why people from every walk of life are supporting GOP candidates. They agree our message is the right one and that we have the solutions to lift up all Americans,” Haley added.

“The Asian alone population grew by 35.5% between 2010 and 2020,” according to the 2020 U.S. Census, accounting for the fastest growing non-white population. Only 55% of Asian-Americans approved of President Joe Biden in a January poll released by the Pew Research Center.

A majority of polls do not include Asian-Americans as a separate demographic due to their relatively small population size compared to Hispanic, black and white voters. Asian-Americans are also diverse, and many are immigrants who are not fluent in English, making it difficult to conduct accurate surveys, according to Pew.

However, Republican Asian-Americans told the Daily Caller they have seen a shift towards the right in their communities.

Discrimination against Asians in school acceptance is “one of the major things that are waking people up” from the Democratic Party, Xi Van Fleet, a mother who left China during the rule of Mao Zedong, told the Daily Caller. 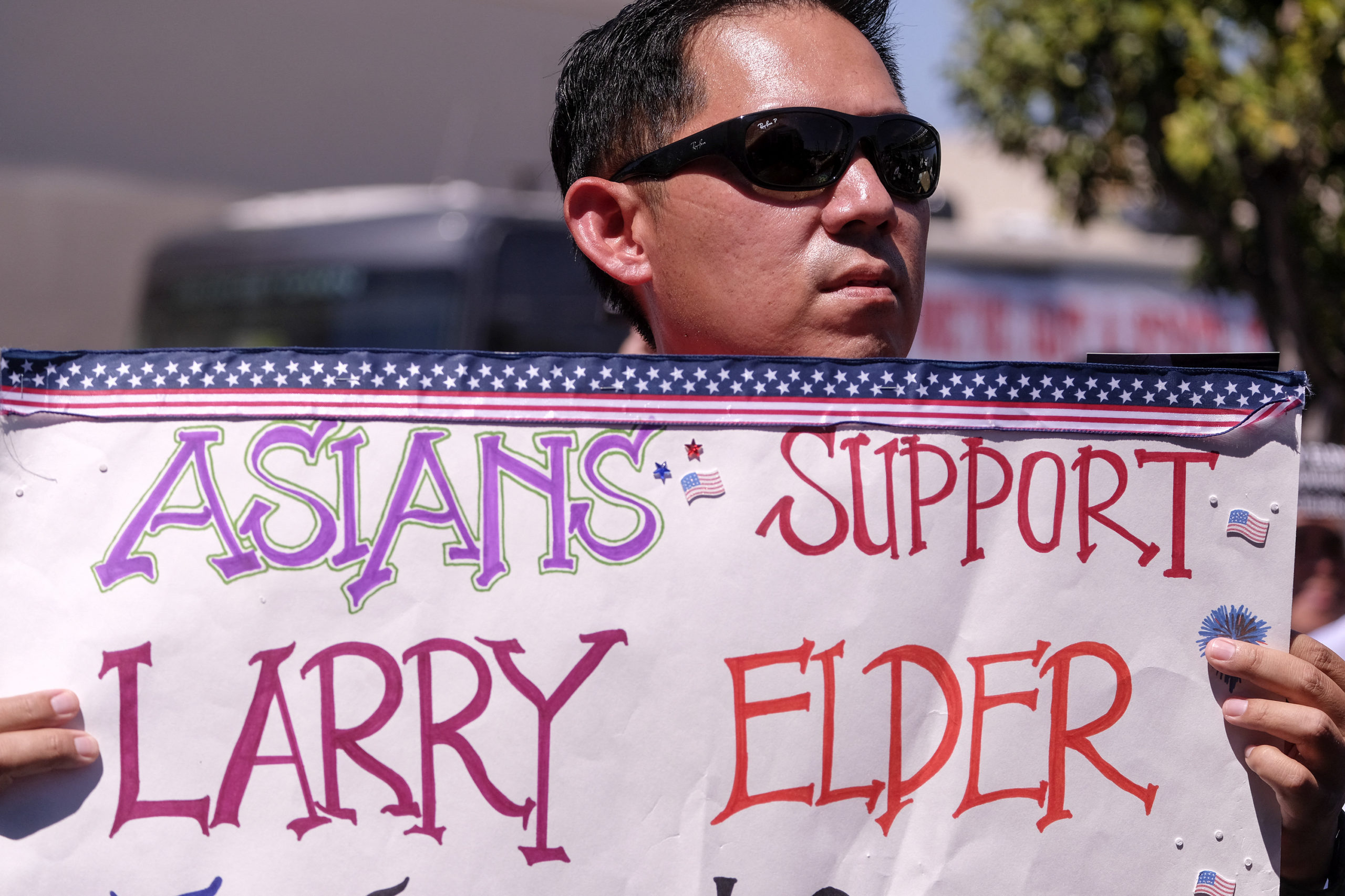 A supporter of Republican gubernatorial candidate Larry Elder holds a sign reading “Asians Support Larry Elder” during an Asian Rally for Yes Recall at the Asian Garden Mall in Little Saigon, Westminster, California, on. – The recall election, which will be held on September 14, 2021, asks voters to respond two questions: whether Newsom, a Democratic, should be recalled from the office of governor, and who should succeed Newsom if he is recalled. Forty-six candidates, including nine Democrats and 24 Republicans, are looking to take Newsom’s place as the governmental leader of California. (Photo by RINGO CHIU / AFP) (Photo by RINGO CHIU/AFP via Getty Images)

In the past, “Chinese, Vietnamese and maybe Korean” immigrants didn’t speak out very loudly about their political preferences, but anti-Asian discrimination in school acceptance processes is changing that, Van Fleet, who gained notoriety after speaking out against critical race theory at a Loudoun County School Board meeting in June, continued.

“Now their children with good scores and good grades can’t go” to schools like Thomas Jefferson High School for Science and Technology, the highest ranked public school in America, Van Fleet said. A federal judge ruled in February that the high school changed its admissions requirements to deliberately reduce the proportion of Asian-American students by removing standardized testing, lowering GPA requirements and including “experience factors” in its application in an effort to increase black and Hispanic students. (RELATED: Top High School In US Discriminated Against Asian-American Students In Admissions Process, Judge Rules)

The only Republican Chinese immigrant candidate running for Congress, Lily Tang Williams, agreed that school discrimination has been a central factor for the Asian-American community in turning to the GOP.

“Lot’s of Asian-Americans are waking up because when you look at it, the Chinese-American values are they want lower taxes, they want the best quality of education for their kids and their kids are being discriminated” by school acceptance policies, Williams, who is running in New Hampshire, told the Daily Caller. (RELATED: Parents Chant ‘Racist’ While Asian Mother Shares Anti-CRT Book During Fairfax County School Board Meeting)

“Wokeism [tells Asians] ‘hey, your color is not black enough,'” Williams said, claiming that the discrimination against Asians in school acceptance rates is also driven by class, since Asians have the highest median household income in the U.S.

“I think Trump’s movement got lots of people activated in supporting him. That’s how I discovered lots of Asian-Americans in my state,” Williams added, noting that she co-founded the New Hampshire Asian-American coalition.

Asian-Americans “also do not like the lawless chaos,” the increase in crime, Democrat COVID-19 lockdown policies, and the wide-open Southern border, she said.

“It’s not fair, it’s not a smart immigration policy, it’s chaos, it’s a national security and public health threat,” she said, claiming that immigrants who came to the U.S. legally feel disdain for illegal migrants being let through the border.

As more and more Asian-Americans engage with the news, and “their English gets better” they realize “wow! We are actually conservatives,” Williams said, adding that the Democrats think they can take Asian-Americans for granted. (RELATED: Why Hispanics And Latinos Are Shifting Right)

“We all want to live the American Dream,” and maybe the “high inflation, high gas prices and lawlessness” will be the determining factor for the Asian-American red wave, she concluded.

Republicans have been trying to cater to the Asian-American community before the upcoming midterms.

The Republican National Committee (RNC) opened its first Asian American and Pacific Islander (AAPI) center in California, the state with the largest AAPI population, in 2021.

A spokesperson for Republican California Rep. Michelle Steel, one of two GOP Asian-Americans in Congress, said the AAPI center “has been well utilized and appreciated in the community.” The center is located in Westminster, California, within Steel’s congressional district.

“As a first-generation American, I am grateful every day to be living my American dream and to represent the AAPI community in Congress. Right now voters everywhere are tired of paying more and getting less under this Administration. I will continue fighting to keep taxes low and to make sure voters know that we are the party of opportunity,” Steel told the Daily Caller.

Haley has endorsed Steel and Republican California Rep. Young Kim for the 2022 midterm election, the only two Asian Americans in Congress, her spokesperson told the Daily Caller.

“Americans across the country are feeling the impacts of economic and public safety crises from rising living costs to increasing crime hurting consumers and small business owners. The Republican Party is the Grand Opportunity Party that is working on pro-growth policies to make life affordable, keep communities safe and ensure future generations can pursue their American dream. That is why we see more Americans of all backgrounds joining the Republican Party. As one of the first Korean American women to serve in Congress, and as a proud conservative, I am working to ensure we continue to grow our party and protect our freedoms,” Kim told the Daily Caller.