A Rhode Island school district is encouraging its community to report anyone who violates the district’s anti-racism policy.

The “Anti-racism, Anti-Discrimination and Anti-Harassment Policy” at South Kingstown school district in Rhode Island says anyone in the educational community is “personally responsible” and must “immediately report” different kinds of racism including, “cyber racism,” “interpersonal racism” and “institutional racism,” according to the district policy. The policy states that “any member of South Kingstown is encouraged to report incidents or allegations of incidents” that break anti-racism policy guidelines. (RELATED: Democrat Activists Are Dishing Out Millions To Keep CRT, Gender Theory In Schools)

The school district administers “No Contact Orders,” prohibiting any verbal and physical contact between the alleged offender and victim, once a report is filed, the policy states. The policy aims to create a district that is “actively anti-racist and anti-discriminatory.”

“The South Kingstown School District Anti-Racism policy creates a paranoid, stasi-style online reporting system for any member of the Town of South Kingstown to report not only incidents of racism, but also cyber racism and interpersonal racism as defined by the district,” Nicole Solas, South Kingstown resident and Independent Women’s Forum senior fellow, told the Daily Caller News Foundation.

Violations of the policy include racism, defined as “systemic oppression of a racial group,” and cyber racism, which is racism on websites and blogs, as well as text messages, emails, images and videos, the policy stated. Interpersonal racism, defined as pre-judgment or bias in “privately held beliefs, conscious and unconscious and external behaviors and actions towards others,” and institutional racism, which is “inequitable outcomes for students who identify as Black, Indigenous, and People of Color in institutions,” are both included in the policy. 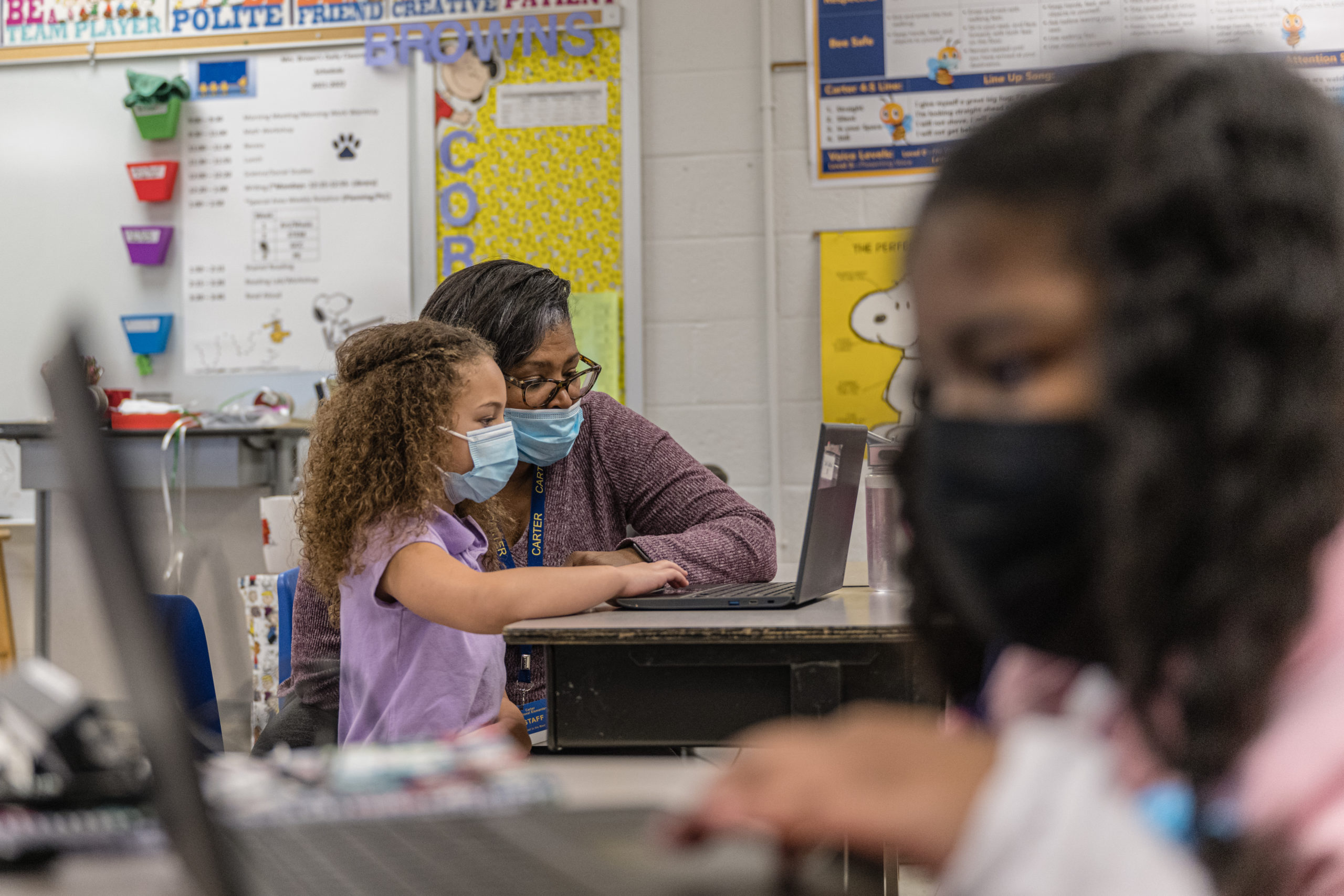 Nicole Brown, a second grade teacher, sits at a laptop computer with one of her students during a lesson at Carter Traditional Elementary School on January 24, 2022 in Louisville, Kentucky. (Photo by Jon Cherry/Getty Images)

Microaggressions, which the school district defines as any intentional or unintentional “slights, snubs and insults” that are hostile, derogatory, negative and target a person, are subject to punishment, according to the policy. Reporting forms are available online and educators are advised to keep students who report violations “safe.”

Any “employee, student or third party” can file a report and if they are against students or any school staff, the complaints will be investigated by the school, the policy stated.

“Determinations on whether the policy was violated are made by either the superintendent, principal or director and there are both formal and informal reporting procedures,” Solas told the DCNF. “Students, teachers, staff and apparently anyone in the town of South Kingstown will be formally deemed racist or not racist by whomever an accuser chooses to process his Orwellian report.”

The South Kingstown Black Indigenous and People of Color (BIPOC) Advisory Committee of the South Kingstown school district is currently being sued by the Goldwater Institute for blocking a parent from attending the public group meetings.

The school district did not immediately respond to the Daily Caller News Foundation’s request for comment.