An education nonprofit that labels itself as non-partisan is pouring millions of dollars into political groups ahead of school board elections, according to Politico.

The Campaign for Our Shared Future, which works for “equitable, anti-racist programs, practices and policies” in K-12 education, is targeting school board elections in red states including Arizona, Florida, Louisiana and Michigan, with a plan to reach at least 15 states, according to Politico. Executive Director Dr. Heather Harding said the group has raised at least $9 million for voting education efforts and plans to raise more. (RELATED: ‘We Are Being Censored’: Co-Founder Of Conservative Moms Group Blasts Twitter)

The campaign branches for Campaign For Our Shared Future were registered by two groups run by Arabella Advisors, a group known for pushing “Democratic dark money nonprofit groups,” Politico reported. New Venture Fund, which centers it’s work in “race, equity, diversity and inclusion” and the Sixteen Thirty Fund, a group that works for “economic equity and racial justice,” are backing Campaign For Our Shared Future.

“After two years of being accused of a fake ‘astroturf’ movement, imagine the surprise of first-time activists and average parents from across the country to see that Arabella Advisors – a massive, dark money-funded network – has poured eight figures into jumping on the education bandwagon,” Parents Defending Education President Nicole Neily told the Daily Caller News Foundation. “It’s unsurprising that democratic donors are panicked about how their allies have mismanaged this issue – but no amount of money can make up for the fact that at the end of the day, they truly believe that they know better than we do how to raise our children… and that is a losing message, period.”

Harding’s work history includes the Bill and Melinda Gates Foundation and Teach For America, who values a “shared commitment to Diversity, Equity and Inclusiveness.”

Campaign For Our Shared Future currently works with Our Turn, a youth activism group that focuses on social justice issues like immigration reform, Politico reported. 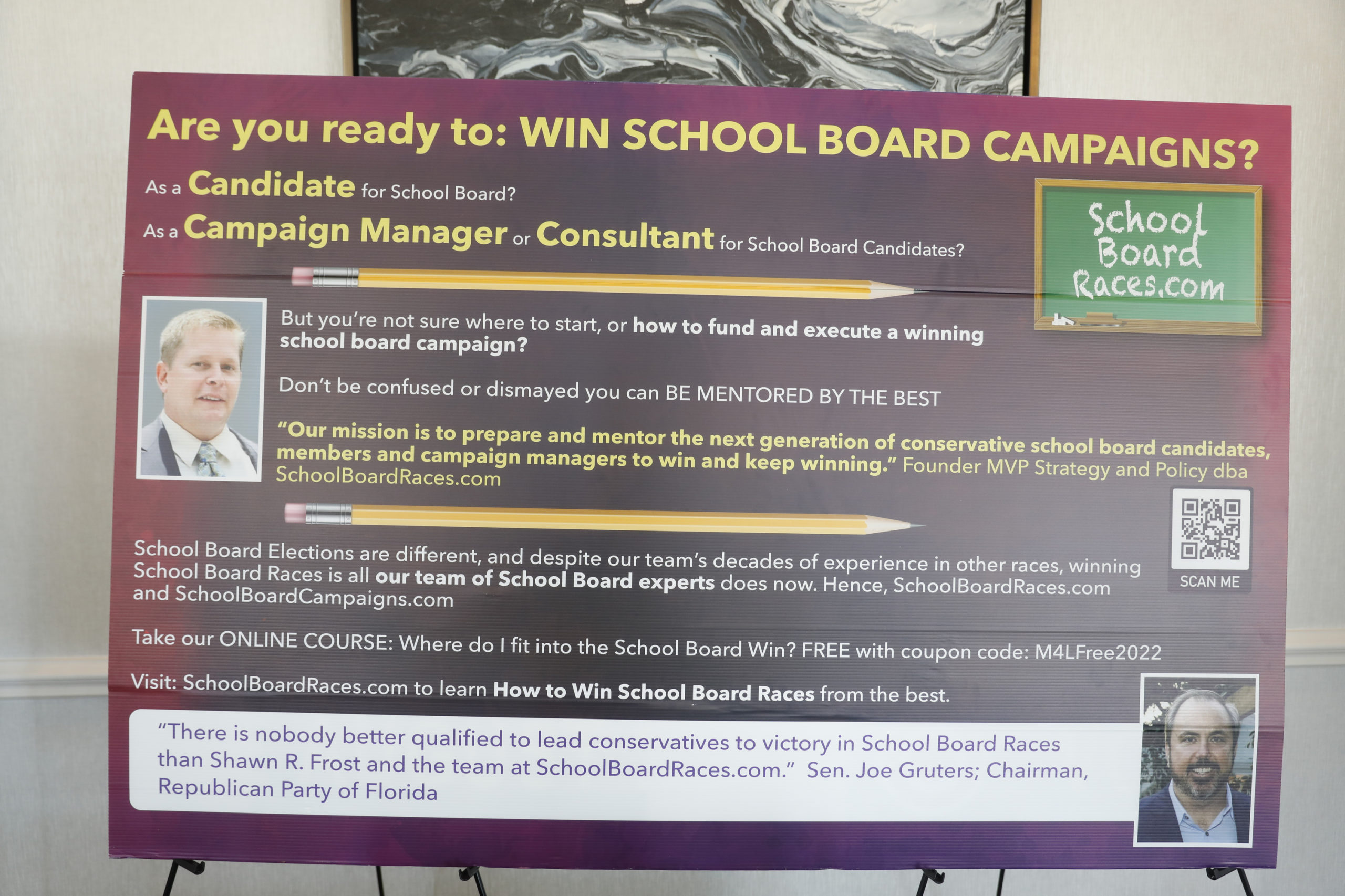 A poster helping those who want to run for a school board position is seen in the hallway during the inaugural Moms For Liberty Summit at the Tampa Marriott Water Street on July 15, 2022 in Tampa, Florida. (Photo by Octavio Jones/Getty Images)

The education group provides a “voting guide” for school board elections in several red states and provides information on what makes a “good school board candidate” including someone who is fairly involved in the school, according to the website. “Extremists are causing chaos” in school board meetings, the group says, providing an example of a Florida man who challenged the school’s equity statement and deemed it “indoctrination.”

The group also called parents who opposed mask mandates in a Virginia school as “conspiracy theorists,” the website shows.

Next the group plans to target Michigan, Ohio, Pennsylvania and Wisconsin but has not revealed in what ways, and will work with Florida Student Power, a group of students focused on LGBTQ, racial and women reproductive injustices, Politico reported.

“It’s clear to me that the battle continues to grow,” Harding told the outlet. “We think that presidential politics will continue to keep schools sort of in their crosshairs. We don’t find that productive to the actual work of learning, so we do hope that as more donors join us we can be broader, and go deeper so that public schools continue to be a backbone of democracy.”

Campaign For Our Shared Future did not immediately respond to the DCNF’s request for comment.