An NBC journalist who criticized the Twitter account Libs of TikTok for reporting on transgender surgery for minors at Boston Children’s Hospital (BCH) also authored an article in 2019 where she appears to take credit for Facebook removing the accounts of privately-run pedophile sting groups.

The efforts of Brandy Zadrozny, one of NBC’s “disinformation” reporters, in both cases follow a nearly identical pattern. First, identify a perceived right wing element online that is highlighting or covering a contentious, questionable or perhaps even criminal issue. Then, cast the subjects of the coverage as victims of “harassment.” Source the public outrage, or “harassment campaign,” to the coverage itself, rather than the contentious, questionable or criminal behavior of the subject. Contact massive tech corporations and alert them that these groups are operating on their platforms.

Zadrozny reported that Libs of TikTok, who tweeted out videos the Boston Children’s Hospital produced and posted publicly promoting puberty blockers for children, were directing “waves of harassment to the hospitals’ larger accounts.” The hospital offers surgeries to artificially construct a penis out of a girl’s vagina, breast removal, and “facial harmonization” to “eligible” patients which include “adolescents and young adults,” according to the hospital’s website. A review of publicly available documents by the Daily Caller News Foundation found that doctors at the medical facility performed at least 65 mastectomies on biological females under between the ages of 15 and 18. Since the blow back, Boston Children’s Hospital has amended its policy for vaginoplasties from 17 to 18 years old.

Boston Children’s Hospital did not respond to a request for comment.

The result of Zadrozny’s reporting speaks for itself: Libs of TikTok’s reporting came Monday, Zadrozny’s on NBC News Tuesday, and Facebook locked Libs of TikTok’s page Wednesday. The usual suspects took a victory lap over the news. Zadrozny’s colleague at NBC’s disinfo desk, Ben Collins, said Facebook “nuked” the account, characterizing the negative coverage as a “campaign” against BCH. Alejandra Caraballo, a transgender lawyer who specializes lately in online censorship and works at Harvard’s aptly named “Cyber Law Center,” explicitly encouraged Twitter to do the same. And an influential trans activist Erin Reid, digital director at Democrat fundraiser Act Blue, blared, “TWITTER MUST FOLLOW, or it will be complicit in what is to come.”

Michael Morris, Managing Editor of Free Speech America and Business at The Media Research Center, says it’s becoming more common for the far left to call speech they disagree with “violent” in an effort to silence opposition.

“If you disagree with the leftist narrative, the left and the big media left is going to come out and try to silence your opinion, or at the very least to try to change the narrative to match what they want,” Morris told the Daily Caller.

The case of POPSquad in 2019 fits an identical playbook.

In January of that year, Zadrozny reported that anti-pedophile sting groups were making alleged pedophiles the victims of “shaming” and “cyberbullying.” Zadrozny’s article profiles 20-year-old Alain Malcolm, an alleged pedophile, who was going to a rendezvous with a 14-year-old boy he had met online for sex. After the anti-pedophile group Prey on Predators (POPSquad) confronted him, promising to expose his behavior to the public, Malcolm went home and committed suicide. (RELATED: ‘Terrorism’: Trans Activists Push For Censorship Of Discussions On Child Sex Changes)

Zadrozny complained in the article that anti-pedophile sting groups receive hundreds of thousands of likes and follows on Facebook.

“Facebook is a key piece of the groups’ strategy,” Zadrozny wrote.

“After an inquiry from NBC News, Facebook temporarily suspended several predator hunter accounts, removed some individual posts and deleted at least one group entirely,” Zadrozny wrote in the article. “Some groups voluntarily removed their own pages to escape what they saw as a purge. POPSquad appeared to be unaffected.”

While not explicitly calling for a ban in public, Zadrozny’s reporting in this case follows the overall pattern of NBC’s “disinfo” desk: Frame Facebook as essential to the group’s potency, then claim the group is causing real world harm, and repeat the claim several times until the platform capitulates.

Zadrozny’s private emails might be more explicit, but NBC was unwilling to be transparent about how she communicated with them. An executive at NBC did not respond to repeated requests from the Caller to make Zadrozny’s 2019 email correspondence with Facebook public.

In since-deleted tweets the Caller accessed through WayBack Machine, Zadrozny posted the story at the time of publication, highlighting portions that referenced Facebook’s role in platforming anti-pedophile sting groups. 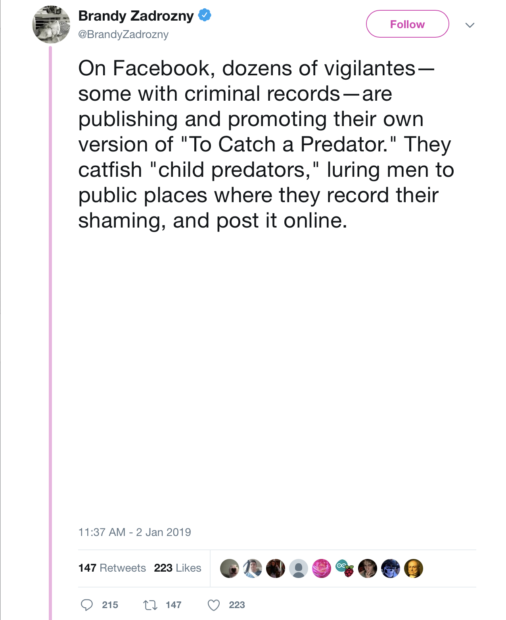 Collins tweeted the story when it dropped in 2019, highlighting a portion of the article where Zadrozny quotes a Wesleyan University professor who indicted the platform, saying, “These kinds of stories, visceral and violent, are more likely to be shared on Facebook.”

“These kind of stories, visceral and violent, are more likely to be shared on Facebook.”https://t.co/eP5z7JDZhY pic.twitter.com/TUVN9uH6Xt 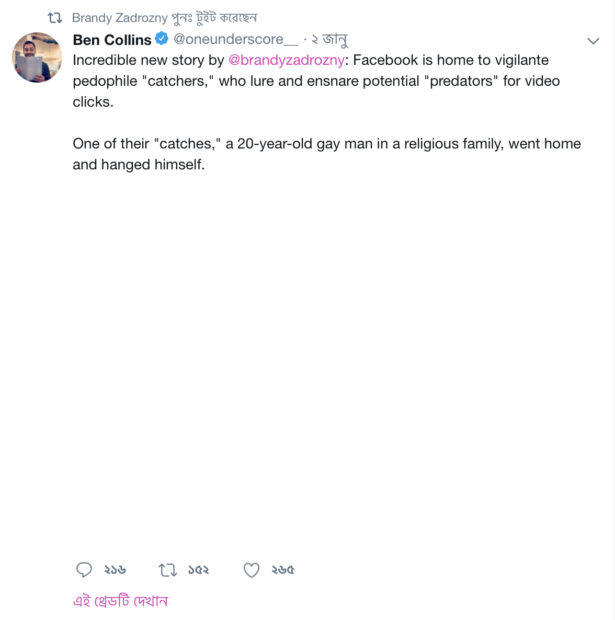 Despite their enthusiastic promotion of the story, the public reaction to Zadrozny’s reporting was far less warm. Users criticized her reporting for seemingly excusing the crimes of pedophiles, calling her out for appearing to encourage social media platforms to censor the story.

In fact, it seems some of the only positive reactions to Zadrozny’s story came from other blue check journalists, one of whom called Zadrozny a “national treasure.”

In neither case, Libs of TikTok nor POPSquad, did Zadrozny include an independent voice willing to defend their efforts.

Joseph A. Travers, a private investigator and Chairman Emeritus of Saved In America, a group of former Navy SEALS and police officers that locates victims of human trafficking and violent pedophiles, told the Caller that groups like POPSquad are good, “as long as they’re working with or in coordination with law enforcement.”

“Because it doesn’t do any good to do that and then the person leaves and there’s no punishment. And it enhances in their [the pedophile’s] own mind, ‘oh I can get away with this,'” Travers said.

In his work at Saved In America, Travers also noticed suspicious activity from Facebook in regard to the organization’s follower counts.

“When we first started and as we’re accelerating, the followers on Facebook started reaching thousands, right? But then all of a sudden it stopped, and we know it’s not because there’s not more followers,” Travers said.

Travers told the Caller that pedophiles who are “shamed” or “bullied” online as a result of their predatory behavior are anything but innocent victims.

“If you try to go and procure and rape somebody’s son or daughter, well, you’ve caused your own bullying and your own shame,” he said.

Anti-pedophile sting groups have uncovered alleged criminal activity from high profile individuals in the past. A manager at Meta, Facebook’s parent company, was caught discussing alleged sexually explicit texts with a person who said he was a 13-year-old boy, after a sting operation from Predator Catchers Indianapolis. A senior Vice President at Sony is under investigation after allegedly trying to meet a 15-year-old boy for sex, according to a YouTube video posted by the anti-pedophile sting group People v. Preds, CNET reported.

Activist James Lindsay, who was suspended from Twitter in August after an apparent Media Matters harassment campaign and repeated reporting of his account from Caraballo, told the Caller, “The playbook needs to be exposed so it stops working.”

“This is a dishonest and frankly dangerous tactic that has been trotted out again and again, and it’s high time we start recognizing it and condemning it,” Lindsay said. “It’s certain Twitter doesn’t have the needed principles to do that, of course, and I hope their shareholders try to get them back on track before it costs them.”

Activists on the left, however, claim that accounts such as Libs of TikTok present a direct threat of harm to LGBT individuals.

“Accounts like Libs of Tiktok have engaged in severe demonisation [sic] of LGBTQ people,” Caraballo tweeted Wednesday. Carabello then echoed Zadrozny’s reporting, transferring the source of the outrage from the policies of the hospital to the people who reported on them.

“These accounts are demonizing and dehumunizing [sic] their targets while simultaneously using violent imagery and rhetoric. They deny all of the resulting violence or effects of their actions,” Caraballo continued.

The day after her Libs of TikTok story, Zadrozny wondered on Twitter if social media companies would “protect” those who are “targeted” by the right’s reporting techniques.

“Will it change how social media companies protect users or people who are targeted through their platforms? I don’t think so,” Zadrozny wrote.