Proposed changes to National Oceanic and Atmospheric Administration (NOAA) rules will strip access to public waters and devastate local economies along most of the eastern U.S. coastline, according to boating and fishing advocacy groups.

NOAA’s proposed regulation expands the speed-restricted area, the Seasonal Speed Zone, up to 90 miles out, covering around 50,000 square miles off the U.S. Atlantic coast, including major tourist destinations in Florida, Georgia, and South Carolina. The coastline speed limit currently only affects vessels 65 feet or longer, but NOAA’s updated rule will mandate speed limits of 10 knots or less for most boats between 35 to 65 feet long, severely impacting safety in the nation’s outdoor recreation sector, warned President and CEO of SCBFA, R. Gettys Brannon. 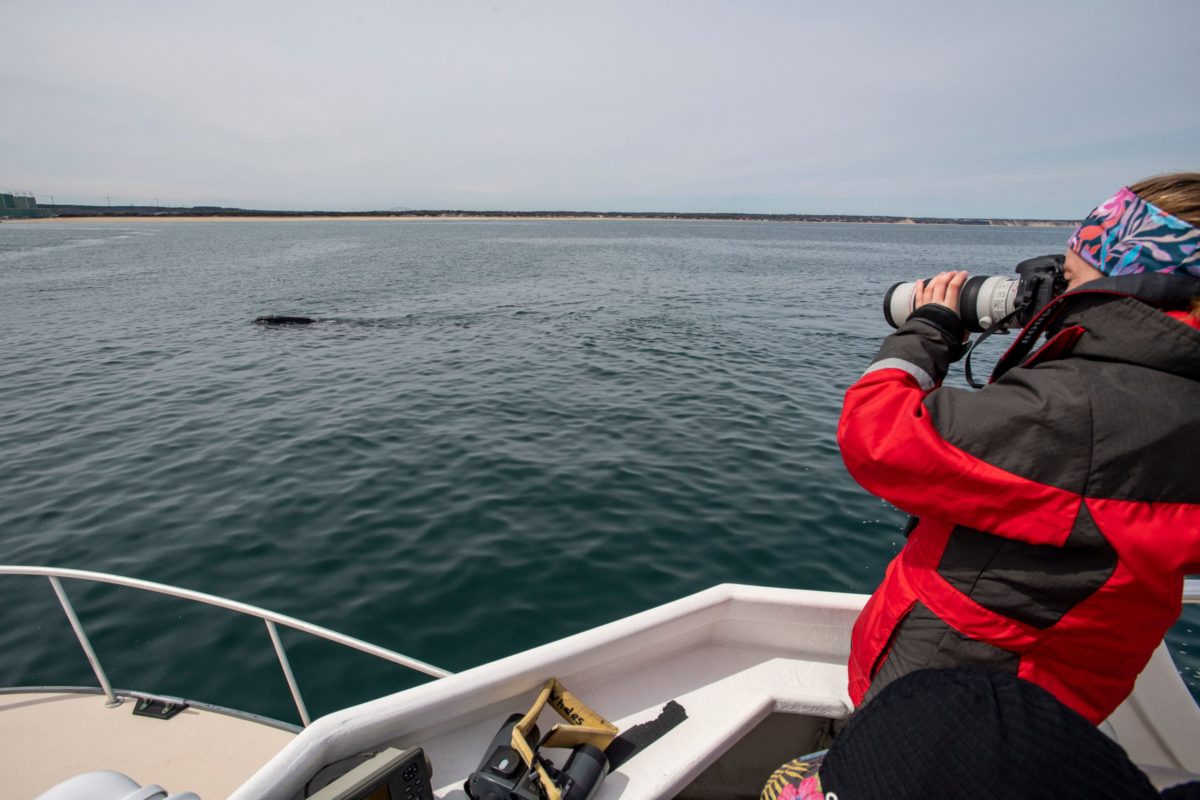 Sara Pokelwaldt, 23, photographs a right whale that has been spotted from the top deck of the research vessel Shearwater during a Right Whale research expedition with the Center for Coastal Studies (NOAA permit 25740-01) in Cape Cod Bay, off the coast of Massachusetts, on April 5, 2022.

“When you talk about putting a 10-knot or an 11.5 mph speed limit on boats over 35 feet, you are suddenly making a day trip to the Gulf Stream or going offshore, in general, more dangerous and more time-consuming,” Brannon said. “It’s not just the time it takes to travel out to sea that is dangerous, but how long it takes to steer cargo ships into the harbor.”

The federal government’s regulation is also causing an untenable economic situation for boating and fishing industries in South Carolina and along the east coast, Brannon warned. “We represent about 23,000 jobs and over 600 related businesses in the $5 billion fishing and boating sector. And those are the businesses — when the federal government does not take into account any balance between the economy and ecology — are the ones that are going to be hurt the most,” he said.

“This problem that NOAA is about to create goes way beyond South Carolina. It’s going to affect every state along the Atlantic seaboard,” Brannon added. “If we don’t justify and figure out the best way to approach this, we could quite literally devastate our coastal fishing economies.”

Six Republican U.S. Senators, including South Carolina Sen. Lindsey Graham, signed a letter urging  NOAA administrator Richard Spinrad to “modify its proposal so that the NARW is protected, but the unintended consequences … can be eliminated.”

Kevin Bishop, a spokesman for Sen. Graham, told the Caller the rule was “an example of government overreach and government not effectively engaging stakeholders.”

“Senator Graham remains concerned about the safety impact the proposed rule will have on cargo ships and their pilots,” Bishop said, adding that the senator worries the rule will “lead to further delays and exacerbate already strained supply chains” and impact East Coast ports that are part of the National Port Readiness Network.

“Senator Graham wants to protect the right whale,” Bishop said. “He believes we can do that while ensuring the safety of Pilots and the economic viability of both commercial and recreational fishermen. He has concerns the government has underestimated the harm and impact this would have on South Carolina’s robust fishing and boating community.”

Recreational boating and fishing contributed $27.3 billion to the $454 billion outdoor recreation sector in 2021, according to the Bureau of Economic Analysis from the U.S. Department of Commerce.

Animal rights activist organization, PETA, told the Caller that these businesses should be less concerned with the economic or dietary impact the rule has on communities and more focused on diversifying their businesses out of industries that “harm animals and the environment.”

“The right whale population is at a tipping point, so every step possible must now be taken to protect them, and that includes not consuming lobsters, crabs, and fish to minimize the threat of fatal fishing gear entanglements to these whales,” PETA said. “Anyone still trying to make an unsustainable living by taking aquatic animals from their ocean homes should see the writing on the wall and start making the switch now to other livelihoods that don’t harm animals and the environment.”

CSP president Jeff Angers told the Caller that the NOAA regulation “is not ready for prime time” and accused the agency of ignoring any input from members of the recreational boating and fishing industry (who he considers “America’s first conservationists”) in creating standards that promote the agency’s right whale protection efforts.

“This proposed rule to regulate vessel speeds all up and down the Atlantic coast was developed without any input from us, the most affected stakeholders. [NOAA] proposed these widespread vessel speed restrictions without due consideration of less severe options that would still achieve the conservation goals,” said Angers.

“Recreational anglers and boaters have been proactively supporting science-based efforts to conserve our marine ecosystems for 100 years,” Angers added. “If the right whales are indeed in trouble, we want to help protect them. We are the guys on the water with our families who stop and marvel at God’s magnificent creation, and we certainly don’t want there to be problems with any of the whale populations. We also don’t want mariners, boaters, and anglers to be on the water in any way that’s unsafe.”

Right whales have been listed as an endangered species since 1970, with the latest preliminary estimate showing there are fewer than 350 remaining. NOAA’s assessment found that right whales have been experiencing an unusually high rate of deaths and injuries from 2017 to the present, resulting in 34 right whale deaths, 21 serious injuries, and 37 sublethal injuries or illnesses in U.S. jurisdictions.

A spokeswoman for NOAA told the Caller the proposed changes, including the reduced speeds, “promote mariner safety” and “further reduce the likelihood of mortalities and serious injuries to endangered right whales from vessel collisions, which are a leading cause of the species’ decline and a primary factor in an ongoing Unusual Mortality Event.”

Angers said that “even the Senators’ letter admitted that the chance of a recreational vessel striking a right whale is less than 1 in 1 million” and that in his 30 years of doing resource management, he’s never known the federal government to come in and shut everything down to protect a single animal.

“Americans deserve access and opportunity to reach America’s public places, like the ocean,” Angers said. “There are some people out there who think that America’s oceans ought to be managed like an aquarium where somebody gets to choose who gets to go to America’s public places and who doesn’t. That’s not really what sound conservation and management are all about.”