The Biden administration has put together a special list of reporters yet again, this time for the traditional White House Christmas press party.

The posh event is set to take place Dec. 13, and a set list of reporters received an email invitation from President Joe Biden and Dr. Jill Biden, who “request the pleasure of your company” for the holiday reception.

The Daily Caller was among the outlets not extended an invitation, after asking White House press secretary Karine Jean-Pierre about the border crisis and attempting to ask Dr. Anthony Fauci about the origins of COVID-19.

Correspondents from Newsmax, the Washington Examiner, and the New York Post were also not given invitations, at least before appealing, the NY Post reported. The Trump administration extended invitations to “nearly every major television network and publication” in 2017, the New York Times reported.

The White House refused to detail to the Caller how it determined who received invitations and if there were any specific reasons why the Daily Caller was not invited.

The president has said before that the administration gives him a “list” of reporters to call on at nearly every press briefing, and the White House also refused to give comment when asked what determines which outlets make the “list.” (RELATED: ‘Not Sharing’: White House Refuses To Say Why Biden Has A ‘List’ Of Reporters)

Deputy press secretary under the Trump administration Brian Morgenstern told the Caller, “most of America views the mainstream press corps as friendly to the Biden Administration. The conservative press are the ones who actually try to hold them accountable. Excluding the conservative reporters from a Christmas party is obviously petty and vindictive, but it also reinforces the impression that the Democrats and the mainstream media are on the same team.”

White House correspondents from a range of outlets expressed frustration with the White House after not receiving invitations to the Christmas party, calling their exclusions “hypocritical” and speculating that they were snubbed after asking the administration hard questions. NY Post’s White House Correspondent, Steven Nelson, even likened the partisan snubbing to Santa’s naughty and nice list.

One White House correspondent from a centrist outlet who has been invited to the White House Christmas party for every administration since George W. Bush said that the White House is “hypocritical” for allowing reporters that “ask softball questions” to “get prime access to the president.” (RELATED: ‘Clearly Rigged‘: White House Reporters ‘Disgusted’ By Biden Using List Of Approved Outlets)

“In isolation, leaving a reporter off a Christmas party guest list is no big deal. Frankly, I wouldn’t go if invited. Reporters shouldn’t be cozy with those they cover. However, it’s the punitive nature of the invitations that disturbs me,” the correspondent said.

“Those that do their jobs, and hold the president, and his Administration to account, face retaliation. From Christmas parties, to exclusion from major media events and opportunities to question the President, this is carefully calculated by the White House. It’s hypocritical,” the correspondent added. 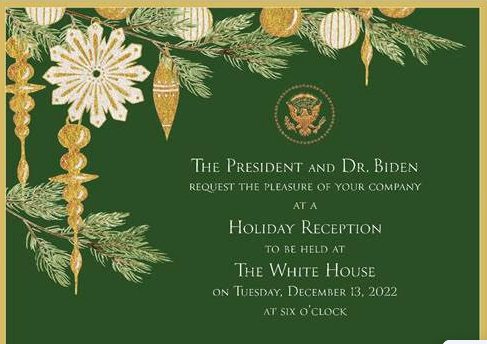 A veteran White House correspondent from a right-leaning publication told the Caller, “it’s not surprising but still unfortunate,” that the administration has chosen to exclude some reporters from the White House Christmas party.

“The Biden team had an opportunity to cut through partisanship and help people come together to celebrate the holidays but appears to have chosen political gamesmanship instead. So much for the Uniter—in—Chief,” the second correspondent said.

The Daily Caller granted anonymity to the two correspondents who chose to remain anonymous out of fear of professional reprisal.

“The Pavlovic Today is to be excluded from the White House press party despite a request for admittance. The current occupants of the White House espouse equality and fairness at every opportunity but as we see here they just don’t practice it. The unashamed hypocrisy is breathtaking,” she said.

“I have a White House hard pass but it appears there are different classes among White House journalists. Some have privileges that I don’t. If you are a member of the tame MSM you are on the A list. As always, words are just words and we should judge people not by them but by their actions. I hope at the next election the Democrats don’t try to claim they are on the side of the little guy or gal. Let alone the immigrant, female entrepreneurs,” Pavlovic added.

Simon Ateba of Today News Africa, who has gotten into several arguments with the White House about not being called on at press briefings, told the Caller that his lack of invitation is “disappointing.”

“If an invitation was sent to me, I never received it. I was not invited. Sadly enough, President Biden is a Catholic who goes to church regularly. As I see the discrimination against me and other journalists right in the White House briefing room and elsewhere, I keep wondering, what will Jesus do? Where is the love of Christ at Christmas? Where are all the talks about loving all people, helping the little guy, giving equal chance to everyone, or respecting press freedom? Where are all the rules about not retaliating against a journalist because they asked an uncomfortable question? So disappointing,” Ateba said.

Brian Karem, who writes for the left-leaning Salon, told the Caller that he doesn’t “care” about not getting invited.

“I really don’t care. I didn’t invite them to my house for a holiday party either. I am more interested in the president showing up more often in a press conference and taking questions from a wider variety of reporters,” Karem said.