Chinese manufacturers continue to dominate the global market for electric vehicles (EVs) and batteries, thanks to their control of minerals critical to the EV supply chain, according to economists who spoke with the Daily Caller News Foundation.

Chinese brands control an overwhelming majority of their domestic market, accounting for 81% of all electric vehicle sales in 2022, with China on pace to become the first country where 50% of yearly sales to be electric in 2025, according to the Financial Times. China has been able to maintain its dominant position through its control of the mineral resources necessary to produce batteries for electric vehicles, Heritage Foundation economist Diana Furchtgott-Roth told the DCNF (RELATED: China’s Network Of Foreign Ports Is Fueling The Country’s Military Intelligence Ambitions)

Battery maker Contemporary Amperex Technology Co. Limited (CATL), while not state-owned, has alleged deep ties with the Chinese Communist Party, and gets significant tax benefits from China’s “Made in China 2025” initiative, which launched in 2015 to promote Chinese technology. The battery-maker was at the heart of Republic Governor Glenn Youngkin of Virginia’s decision to pull Virginia out of the running for a Ford battery manufacturing facility, as CATL would retain ownership of the battery technology at the heart of Ford’s cars.

The move drew criticism from Democrats in the Virginia state government, who accused the governor of sacrificing an estimated 2,5000 Virginian jobs for his political gain, according to the Associated Press. Furchtgott-Roth praised Youngkin for showing “strategic insight,” and promoting “American interests over the Chinese game.”

CATL — which supplies batteries for Tesla and Volkswagen — combines with China’s second-largest battery-maker BYD to produce more than 50% of all electric vehicle batteries in the world, the FT reported. The company is able to control such a large portion of the market thanks to government-funded mines for rare earth minerals in eastern China and agreements with cobalt mines in the Democratic Republic of the Congo (DRC), where it sourced roughly 25% of its cobalt reserves in 2022, Furchtgott-Roth told the DCNF. (RELATED: Tesla’s China Head Now Oversees Its US Factories, Becomes Musk’s Number Two: REPORT) 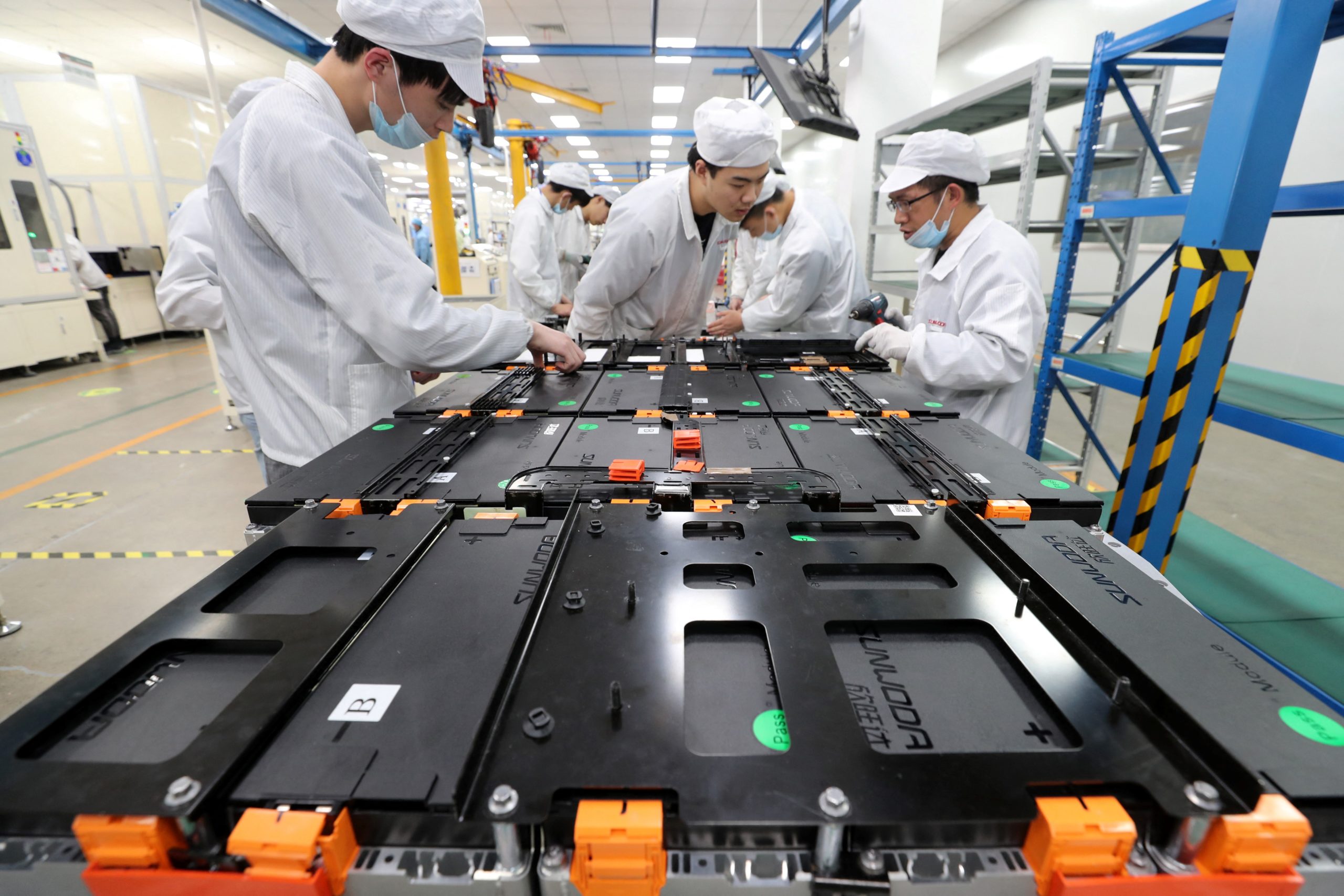 This photo taken on March 12, 2021 shows workers at a factory for Xinwangda Electric Vehicle Battery Co. Ltd, which makes lithium batteries for electric cars and other uses, in Nanjing in China’s eastern Jiangsu province. – China OUT (Photo by STR/AFP via Getty Images)

As of 2019, China produced roughly 60% of rare earth minerals worldwide, while the DRC produced roughly 70% of the world’s supply of cobalt, according to the International Energy Agency (IEA). China was also the world’s number one processor of “transition minerals,” considered key to green energy projects, processing nearly 90% of the world’s rare earth minerals, and roughly 60% of all cobalt and lithium, while accounting for more than 30% of global processing for nickel and copper.

China has enjoyed relatively uncontested access to African rare earth minerals because the U.S. effectively “pretends as though Africa doesn’t exist” and is generally unwilling to negotiate or collaborate with African governments, according to Furchtgott-Roth.

Electric vehicles require more than four times the minerals of a car with a conventional internal combustion engine, according to the IEA. In addition, while traditional cars typically only require copper and manganese, electric vehicles also require nickel, lithium, cobalt, graphite and trace amounts of rare earth minerals.

It is this access to and control of the most in-demand minerals that has enabled Chinese dominance of the electric vehicle market, Fuchgott-Roth told the DCNF.

“Basically, we have left Africa to the Chinese, so we’ve left all those minerals to the Chinese, to the detriment of our [electric battery] operations” said Furchtgott-Roth.

Through 2020, roughly 15% of the world’s cobalt and rare earth minerals were used in clean energy technologies, according to the IEA. By 2040, between 40% to 70% of demand for cobalt will be driven by clean energy technology, with a smaller jump to 25% to roughly 40% of demand for rare earth metals being taken up by clean tech, depending on how aggressively countries pursue climate change agreements.

A loosened “regulatory process for U.S. companies to actually engage with African firms,” would make it easier for U.S. companies to compete with Chinese firms in Africa, but that is unlikely to happen soon, Ryan Yonk, a member of the senior research faculty at the American Institute for Economic Research, told the DCNF. Yonk credits China’s aggressive action to take control of the electric vehicle market, combined with relative inaction from the U.S., for China’s position in the market.

“I think they have first actor advantage,” Yonk told the DCNF.

Despite this, Yonk believes that these investments are unsustainable in the long-run. China’s policies are typically geared towards benefitting politicians over businesses and consumers, meaning the industry’s momentum is likely to fizzle out, according to Yonk.

“We’ve seen this in other industries in China, the state-backed performance doesn’t hold up over time,” said Yonk. “It can look real successful in the short run, but over the long run … consistent value delivery to consumers is what leads to a successful economy.”

Both economists argued in favor of scaling back U.S. regulations to promote U.S. company’s ability to innovate. Furchtgott-Roth was particularly critical of Democratic states like New York and California that had implemented rules banning the sale of gas-powered cars after 2035, noting that electric vehicles were already encouraged by several manufacturing tax credits.

The China Association of Automobile Manufacturers, a trade group representing Chinese automakers, did not respond to a DCNF request for comment.