As Congress debates an overhaul of the tax code, it is considering implementing new taxes that will have a dramatic impact on the middle class and effectively raise taxes on about 96 million people. This blanket-style review of the tax code would end the tax-exempt status for nonprofit credit unions, which would jeopardize tens of thousands of jobs and stifle economic growth.

New taxes on credit unions will also eliminate needed competition between banks and credit unions. The result: higher fees and higher loan and mortgage rates for many in the middle class, and for small businesses.

The proposal to place new taxes on credit unions is being pushed on Capitol Hill by the banking industry’s K Street lobbyists, who tell politicians that credit unions’ nonprofit tax status gives them an unfair advantage, while at the same time letting credit unions off the hook in the effort to balance the budget.

But banks have private investors and stockholders, and are taxed on their profits. Credit unions make no profits and return their surplus back to their members through lower interest rates on loans and higher rates on deposits – so taxes are paid at the individual member level. According to an Americans for Tax Reform review of current tax policy, “the net effect for federal coffers is pretty close to a wash.”

The Congressional Joint Committee on Taxation estimates the tax exemption for credit unions amounted to $0.5 billion last year. But $0.5 billion is only a tiny fraction of the annual deficit. And worse, Steve Pociask of the American Consumer Institute writes, “…eliminating the nonprofit status of credit unions would cost consumers $16 for every $1 of taxes saved. That would be a really bad deal for consumers.”

As for the supposed unfair advantage claimed by Big Banking’s lobbyists, a look at the market share of credit unions does not bear their argument out: Banks hold 93 percent of financial assets in the United States, while credit unions hold roughly six percent.

The Credit Union National Association (CUNA) is working to prevent new taxes from being foisted upon credit unions. CUNA partners with state leagues and credit unions to track and have an impact on laws affecting operations and members. CUNA engages credit unions at the grassroots level, facilitates discussion and provides credit union input to regulators to build knowledge for compliance staff. CUNA is helping credit union members voice their opposition to new taxes on these member-directed and member-owned institutions in an effort to preserve an essential piece of our financial system and a vital tool for the middle class and our communities. 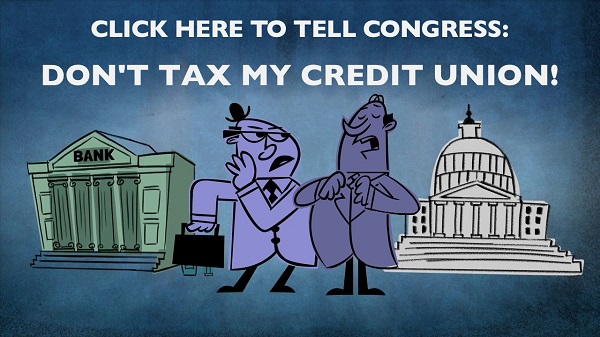