Due to El Niño and global warming, 2015 natural disasters are much less costly than expected, according to a study by an insurance industry group.

The insurance industry’s largest losses in recent years are due to severe winter weather. Global warming and El Niño — a weather event that warms up ocean temperatures in South America, causing the United states to get unusually warm for a year — abated these insurance costs, according to Munich Reinsurance America, Inc.

The particularly harsh winter of 2014-2015 caused direct losses of $4.6 billion dollars, 73 percent of which was insured. Losses due to winter weather were also bad during the 2013-2014 winter, the study reported.

Additional insurance industry expenses accrued due to tornadoes, but fewer than 1,200 tornadoes were recorded in the U.S. in 2015 — below the annual average of 1,360. The warming trend also “impacted conditions that led to a quieter overall thunderstorm season,” further reducing losses. 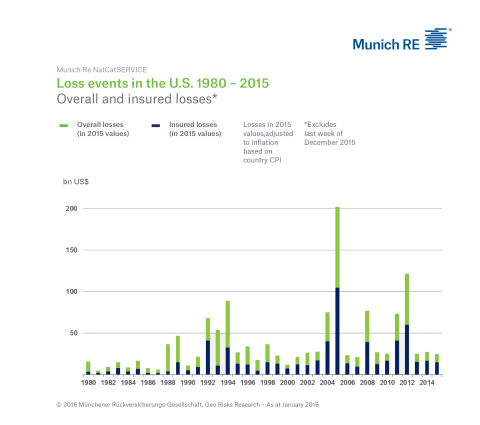 Extreme weather events like tornadoes and floods have been remarkably less deadly as well in recent years. Thousands of American lives have been saved from tornado and flood deaths due to the weather patterns, according to the charts below.