A new ad that hopes to inspire gym goers is using an interesting technique: a topless model breastfeeding twins.

Lydia Hearst is wearing an evening gown in an upscale restaurant and has two kids latched onto her chest in the latest advertisement for Equinox.

The image is part of the gym’s latest fitness campaign, “Commit to Something.” 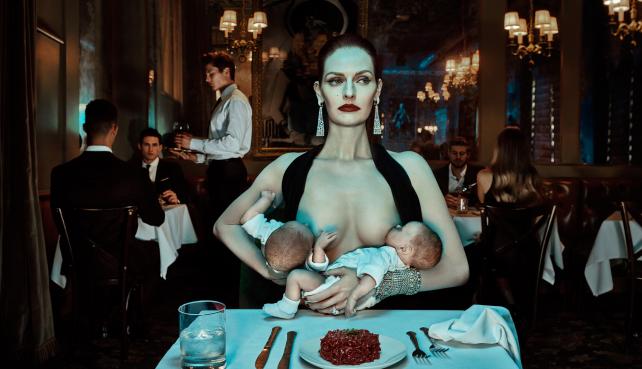 Some are criticizing the ad because they believe Equinox is only milking the breastfeeding controversy. (VIDEO: People Are Losing Their Minds Because This Anchor Does Her Job While Practically Topless)

“Disgusting on two levels 1. No one wants to lose their appetite at dinner by seeing breastfeeding and boobs not being covered up (gross), it takes away the rights of other diners,” one user commented on the ad.

“2. They aren’t even her kids (gross) and furthermore, I breastfeed, but I excused myself or covered up. WHY do some women think that their right to breastfeed in public means that they have to whip out an entirely naked boob just to make a point WHY?”

The photographer who shot the image said it’s about more than selling gym memberships.

“It is the responsibility of advertising to communicate modern times and social issues,”  Stephen Klein said.

“This campaign addresses today’s issues and social commentaries, which is a powerful approach instead of portraying people as superficial objects with no narrative.” (PHOTOS: People Are Losing Their Minds Over This Smoking Hot TV Meteorologist)