Liberal news outlets are reporting 2015 is a record year for wildfires in the U.S. and that that record was likely driven by man-made global warming.

The U.S. Forest Service reports fires burned 10.1 million acres of private, state and federal lands in 2015 — a record number of acres, according to the agency. Forest Service officials told liberal media outlets they had to borrow money three times to put out fires, and more than half the agency’s budget went to firefighting in 2015.

But 10.1 million acres is not a record amount for wildfires. In fact, it’s not even close to the worst wildfire season in U.S. history. The number of acres burned last year is only about one-fifth the acreage burned in 1930 and 1931 when more than 50 million acres burned. 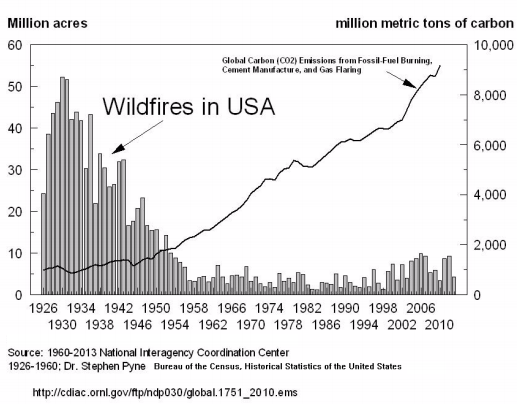 What’s most interesting is the years with the worst wildfires occurred when carbon dioxide emissions were only a quarter of what they are today. This is important because scientists claim CO2 and other greenhouse gases are heating up the planet and driving more wildfires.

“Neither relationship proves anything about the effects of carbon dioxide on wildfires since, during dry seasons, human activity is the overwhelming factor that determines both the number and size of wildfires,” professor David B. South of Auburn University told the Senate Committee on Environment and Public Works during a hearing last year.

Media and the U.S. Forest Service only show data going back to the 60s, like what liberal news site Climate Centra posted, to allege that global warming is making wildfires worse.

But forestry experts debunked these claims. They argue human management of forests is the main factor in how bad wildfires get. Fire management improved greatly after the 1930s and 40s, especially since the Forest Service began allowing more logging to occur which brought down the fuel load in forests — meaning fire risks were greatly reduced.

Forest management changed as environmental groups became more influential. They successfully convinced federal agencies to take more of a “hands off” approach to forestry, meaning they have halted most of the logging on public lands and aren’t actively clearing the woods of fire fuel.

“Policy makers who halt active forest management and kill ‘green’ harvesting jobs in favor of a ‘hands-off’ approach contribute to the buildup of fuels in the forest,” South told senators last year.

“This eventually increases the risk of catastrophic wildfires,” South said. “To attribute this human-caused increase in fire risk to carbon dioxide emissions is simply unscientific.”