Oil prices will continue to ebb for at least a decade thanks in part to slow Chinese economic growth and the booming U.S. shale industry, according to the world’s largest energy commodities trading group.

“It’s hard to see a dramatic price increase,” Vitol Group BV Chief Executive Officer Ian Taylor told Bloomberg. Prices will ping-pong back and forth between $40 and $60 a barrel, Taylor added.

He continued: “We really do imagine a band … I can see that band lasting for five to ten years. I think it’s fundamentally different.”

Vitol’s upper limit — $60 a barrel — would place crude prices at July 2015 levels, which was a cakewalk for traders. In fact, back then the oil industry believed those prices were too low, intolerable even, and were considering ways to get them back above $100 a barrel.

The group’s forecast, according to Bloomberg, means oil industry traders would face their longest stretch of sub-$100 a barrel oil prices since the 1986-1999 period, when prices hovered around $10 and $20 per barrel.

Taylor told Bloomberg he was unsure about when crude’s bottom line would come, as supply continues to trump demand, leading to massive stockpiles of oil. Indeed, the last time the U.S. saw oil inventories this large was during the The Great Depression.

Taylor doubts the oil market will ever see $100 prices again.

“You have to believe that there is a possibility that you will not necessarily go back above $100, you know, ever,” he said.

The problem is that “there is so much more supply,” according to Taylor.

One of the primary reasons for the sustained trough in oil prices is OPEC’s record oil production. Prices plunged following OPEC’s decision in November 2014 quit adjusting oil supply to manage prices, and instead turn spigots on full blast to keeping production going at maximum levels.

Below is a chart illustrating OPEC’s oil production since 2014. 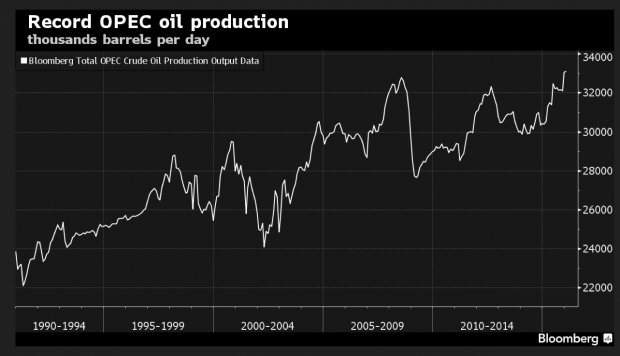