People who identify as Democrats are far more likely to be disappointed in their children if they marry someone with opposing political views.

The British-based pollster YouGov found that left-wingers in both the UK and the US have more of a hangup about their future in-laws politics and their right-leaning peers.

“If a guiding principle of the left is tolerance, you might expect left-wingers to be more casual about the political makeup of their families. But in fact on both sides of the Atlantic people who identify as Labour or Democrat are more likely to say they’d be upset if their son or daughter married a Conservative or Republican,” writes YouGov’s Will Dahlgreen.

Although leftists on both sides of the Atlantic are worried about their children marrying the enemy, supporters of the British Labour party are more likely to dismayed at the thought a conservative in-law. 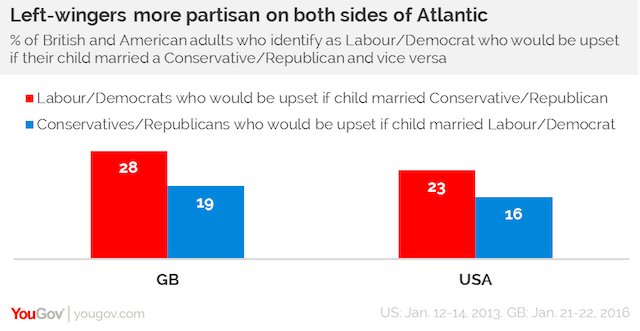 “Despite the American political system going through an unprecedented era of partisan deadlock – bringing the federal government to a total shutdown in 2013 and preventing Barack Obama from achieving substantive reform in the last few years of his presidency – Americans from both the left and right are less likely than their British counterparts to say they’d be upset if a political outsider joined the family,” Dahlgreen said.