“I bet I’m the only senator to learn to swim at a whore house swimming pool.”

— Democratic Sen. Harry Reid in a radio interview Thursday by The Takeaway‘s Todd Zwillich. He also said this about wanting to keep working in the Senate despite this being his last year: “I wish I could stay here until I dropped dead.”

Call Montel Williams a damn ‘RINO’ and you’ll get blocked

Bureau Chief says farewell to Al Jazeera America: ‘We are all better for the experience.’

“I was the first reporter on the air for AJAM in August 2013. Tuesday night, I and a handful of colleagues were the last.
Along the way we were part of an effort to report the news in a straightforward and comprehensive way. We tried to do stories about the forgotten and shine a light on injustice. To hold the country’s leaders to account. It’s something to believe in. I became the DC bureau chief for newsgathering. I can’t begin to tell you what a pleasure it was to lead our lean, mean team of experienced professionals, and to mentor our younger colleagues in the ways of DC and the world of TV News. Journalism is a great life, and AJAM DC was a great place to live it. We are all better for the experience.” — Mike Viqueira.

Take a break from Twitter and THIS could happen

“Good Lord. I step away for an hour and my mentions fall all to hell.” — Washington Examiner media reporter Becket Adams.

“You know what makes me crazy about web coverage of the race to the White House? I would have not hired and quickly fired most of the writers who cannot write. They go into Hamlet-like soliloquies before getting to the nut graf. Self-impressed idiots of every political stripe.” — John Futch. (Full disclosure: My former editor at The Boca News.)

Gabriel Malor (The Federalist, HotAir): “I am disgusted. I am appalled that @greta would say that a woman should not sue a man who abused her because it is expensive and difficult.”

Nino: “Just trying to take a principled stand against those who have made a fortune from filing frivolous lawsuits.”

Meanwhile… MSNBC’s Mika Brzezinski thinks this whole thing is not celebrating a woman’s worth.

“This was a joke from the beginning,” she said Friday on “Morning Joe.”

In short: Candidates whining about interviews is stupid 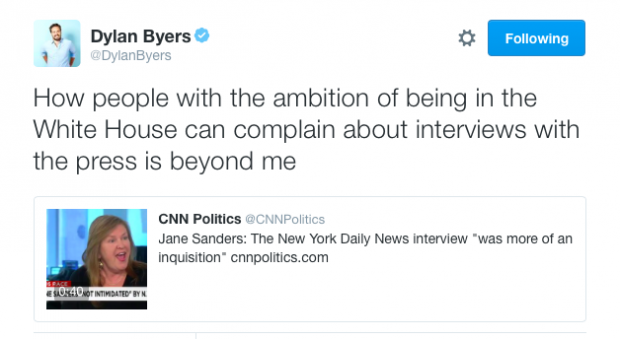