“Thank you for diagnosing my obsessive disorder. It’s amazing how you nailed it having never met me, Ms Cleo.”

— NYT columnist Charles Blow to a Bernie supporter who asked, “You’re so obsessed with Sanders… why not write how Hillary’s winning?”

“Fact that someone is polarizing, unconventional or better known than you is no excuse to treat them unfairly.” — WaPo‘s Pulitzer Prize-winning racial protest organizer Wesley Lowery, who is clearly referring to himself, not Shaun King. Oh, what a psychologically tangled web we weave.

WALKER: But this happened multiple times and I find it very hard to believe @ShaunKing never looked at his stuff online.

KING: Is your hypothesis that I saw these, and said, you know what, FUCK IT, I love this error, let’s let it ride? Tell me.

WALKER: My theory would be that this was a practice at the daily news that you were complicit in. Or maybe what you’ve said is true. I don’t know but one is far more plausible to me.

KING: “What is more plausible to you? That I saw these errors, said ‘fuck it I like them, let’s keep them’ and moved on? Really?”

WALKER: “Knowing tabloids and aggregation it’s very plausible to me an editor was engaged in bad practices there…but also that you noticed and rolled with it.”

KING: Did you see where I CAREFULLY linked, stated, quoted, and attributed each story? I did all of that, then liked the error?

WALKER: There’s pressures to keep jobs in this world and such. I think it’s possible you were aware of this.

KING: To keep my job, I saw these errors and ignored them? Bullshit. I take major risks with what I write daily.

WALKER: Anyway, even if we disagree, good to have a relatively civil conversation. Have a nice day.

“I feel like I’ve wasted about 30 hours of my life this campaign season listening to pundits explain that people who get the most votes win.” — Mark Harris, Vulture.

“If you want to know the real results of the primary, ram your head very hard into a wall, pass out tomorrow, and then you will know.” — Logan Dobson, a Cruz supporter.

Convo between a reporter and a Weiner

Jake Sherman works for Politico; Weiner is a failed New York mayoral candidate who tweeted out a picture of his penis and then lied about it, at one point insisting he didn’t know if it was his or not.

WEINER: “Local man has trouble getting over himself.” He’s referring to this from Herb Jackson: “”I want to be asked. I think they take you for granted, these people,” says @Repsires a Clinton backer in ’08, but so far not in ’16.”

SHERMAN: A former colleague of yours!

SHERMAN: And you’re surprised that members of Congress like to be stroked a bit?

Mirror facts of life: Probably not wise to use the word “stroked” around Weiner.

Campaign update: Ted Cruz insists he won’t be an asshole about delegates

“Per source in room, Cruz blasted Trump in closed-press RNC reception. Made clear his campaign would not try to intimidate delegates.” — TIME‘s Zeke Miller.

“Let him in! To the restroom with your daughter or else you’re a narrow minded, judgmental, unloving, racist bigot who needs to die!!! … “A man is a man no matter what they call themselves” and “Now you need laws telling us differently? Pathetic.” — Curt Schilling, former Boston Red Sox pitcher and now ex-ESPN commentator. See more in the AP story.

When breaking news is not exactly ‘breaking’ 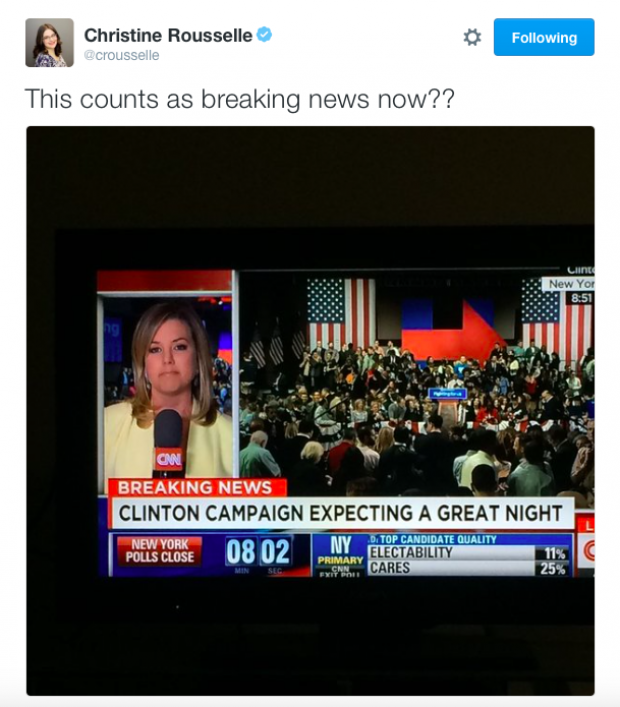