Researchers paid a company that harvests fetal parts $3,340 for the brain of an aborted fetus, new evidence released by House Republicans shows.

Invoices obtained by the House select panel investigating the fetal tissue industry show exactly how much researchers paid the middleman for different kinds of brains, hands and feet, livers and other parts, as well as the cost of shipping and procurement. In the chart below, constructed based on the documents by The Daily Signal, the going rate for some of the parts is illustrated. 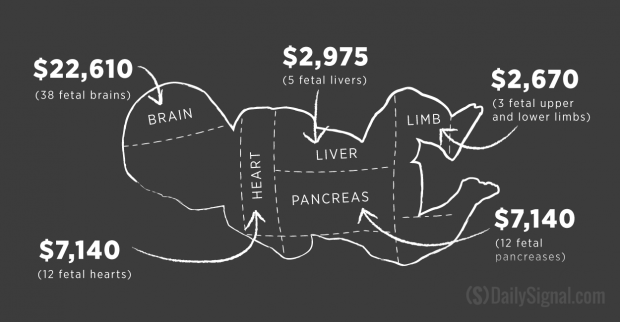 Screenshots of the unnamed procurement company’s website contained in the report show how researchers or interested parties could order from a massive list of parts. In turn, the procurement company would send technicians to an abortion clinic where they would obtain consent from mothers, then harvest the desirable parts and ship them to the buyer.

Republicans on the panel say the documents they’ve obtained show the fetus procurement company and the unnamed abortion clinics it worked with “may have acted in violation of federal law” that prohibits anyone from profiting off the exchange of fetal tissue.

A former U.S. prosecutor testified before the panel Wednesday that in his opinion there is “proof without a reasonable doubt” the organizations profited from the exchange of aborted fetus parts.

“I believe a competent and ethical prosecutor could determine probable cause that both the abortion clinic and the procurement business violated the statute, aided and abetted one another in violating the statute and likely conspired together to violate the statute,” attorney Brian Lennon testified. “In fact for five or six elements in the subsequent defense, in my opinion, there is proof without a reasonable doubt.”

Planned Parenthood and fetal tissue procurement company StemExpress are not named, but it’s fairly clear they’re the organizations the panel is talking about. Both were featured in a series of undercover videos released last summer by The Center for Medical Progress, which depicted the process and attitude toward fetal harvesting in Planned Parenthood clinics.