Looks like President Obama wasn’t the only one dropping the microphone this weekend. Because the “Game of Thrones” writers not only dropped the microphone, they slaughtered it — and brought it back to life. 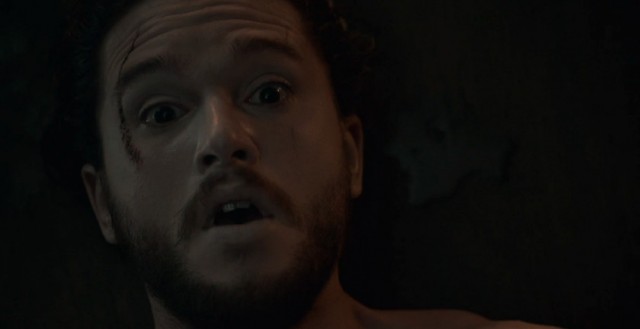 In a predictable (yet somehow still bold) move, the writers indeed brought Jon Snow back to life — with the help of the magical, effervescent Melisandre. And now all those think pieces can be put to rest, for the love of the Lord of the Light. All HBO marketing signs pointed to this too, but that’s all beside the point now.

The craziest part of the episode, though, is that this wasn’t the sole important plot point. After a slow burn in season six’s first episode, its second moved at a rapid pace, across lands and storylines faster than one of Dany’s dragons.

Exhibit A: The valiant return of Bran Stark, whose latest vision took him back in time to a fortuitous event (and, if the next-time-on-“Game of Thrones” indicates, a series of events). It featured a group of characters we know, including Ned and Lyanna (!) Stark, giving rise to fan theories re: Jon Snow’s impending true parentage reveal. Not to mention we got to see a young Hodor, whose real name is Wylis — who said something other than “Hodor.” Too bad this didn’t translate to the present.

Exhibit B: The decimation of the Bolton family tree. That’s right, ladies and gentleman. If you thought Ramsay couldn’t get any more vile or crazy, you lost a bet tonight. Because upon learning of his little brother’s healthy birth — therefore devaluing his heir status — he stabs his father Roose Bolton, killing him, and makes a witness promise to say he was poisoned by enemies. And his father even told him he’d always be his first-born. Not that I feel sorry for Roose Bolton in any capacity (i.e. “The Red Wedding”), but still. The man said something half-nice, and then his son killed him. For the record, my notes here said “WHAT THE DAMN HELL.”

And for good measure, Ramsay went and unleashed dogs on poor Walda and his baby brother. “Where is Lord Bolton?” she asked sheepishly. “I am Lord Bolton,” Ramsay declared. For now, methinks.

Exhibit C: The return of the Greyjoys. Not sure if it was the smart transition between Theon leaving Sansa to shifting right to the Greyjoy plot, but somehow I’m more interested in them than I have been in the past. Possibly because Balon is dead now — killed by his brother, apparently a theme of the night — leaving ample room for chaos and intrigue, etc.

Elsewhere, Jamie and Cersei each had tender moments with now only child Tommen, Arya might be getting her eyesight back and Sansa’s gearing up to go see Jon Snow. Oh, and let’s not forget when Tyrion Lannister unleashed the dragons.

If the pace of tonight was any indication, be prepared for many a mic drop this season.