A sociology professor at DePaul University announced her resignation in a public Facebook post Friday morning in which she denounced the idea that universities should be “neutral platforms for ‘equal’ exchanges of ideas” and said that “so-called free speech” is “delusional.”

Dr. Shu-Ju Cheng, who goes by the first name Ada, posted a copy of an email she apparently sent to university president Rev. Holtschneider to a Facebook page affiliated with the DePaul University sociology department.

“To believe that universities are simply neutral platforms for ‘equal’ exchanges of ideas, the so-called free speech rooted in the market ideology, is delusional,” she wrote. According to Cheng, “that positional objectivity ends up reinforcing the exact inequalities and dominant ideologies upon which this institution is built.” 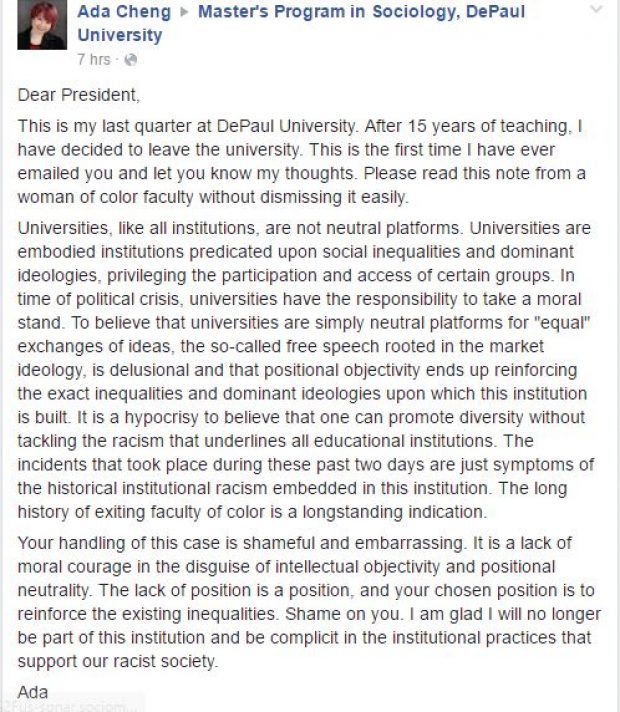 “It is a hypocrisy to believe that one can promote diversity without tackling the racism that underlines all educational institutions,” Cheng continued.

[dcquiz] Holtschneider has been criticized by conservatives over his handling of an event featuring Breitbart’s Milo Yiannopoulos after the university allowed protesters to hijack the event and threaten those in attendance.

Cheng also criticized the university’s handling of the event–but for the opposite reason.

Cheng blasted Rev. Holtschneider for allowing the event to happen at all. She called his handling of the case “embarrassing” and “a lack of moral courage in the disguise of intellectual objectivity and positional neutrality.”

Yiannopoulos responded to news of Cheng’s resignation by declaring victory. “Splendid. I told you I was winning,” he said. “One down, the rest of the American educational establishment to go.”

The Daily Caller reached out to the university to confirm Cheng’s resignation, but multiple representatives opted to neither confirm or deny that fact.

Update: In an email to TheDC, Cheng claimed that she first submitted her resignation in December. Her Facebook post appears to be the first public announcement, in any form, of Cheng’s resignation. She declined to answer whether she believed it was wrong for Milo to be prevented from speaking.