“Unfathomable to many political observers that Republicans are just now realizing they have an un-electable racist.”

“This is hard to say as a Republican but after the chaos of Trump, familiarity of the Clintons is comparatively comforting. The devil we know?” — Cheri Jacobus, GOP consultant.

“Everyone looks cute in the snapchat dog filter because it covers the nose, which is the butthole of the face.” — Brian Feldman, associate editor, New York Magazine.

“The exhilaration you feel when you tell your kids that, if we all work together, someone you have known for 35 years – your friend – will be the first woman President. And a damn good one at that. ‪#‎WeAreWithHer‬ @HillaryClinton.” — CNN contributor Hilary Rosen.

“The shocking news that David French, who was Bill Kristol’s choice as an independent presidential candidate, has decided NOT to run stuns all of us who have never heard of him in the first place.” –Former NPR journo Ken Rudin.

“The taco bowl Trump is going to need to eat to make up for this judge stuff is bigger than his head.” — Josh Barro, senior editor, Business Insider.

When the power goes out this guy gets enraged

“My power has gone off three times in the past 10 minutes. I am approaching official enraged status.” — Sean Bugg, realtor, former c0-publsiher of MetroWeekly.

“Let me say something: I know that all of us are out here grinding. Everyone is an entrepreneur now. Everyone is a life coach. Everyone is a trainer. (I will resist the temptation to comment on how 90% of the people doing this are not qualified or stable enough to be coaching anyone about anything). Everyone is a PR person or media expert (so not true). Everyone is hustling but there is a line when you infringe on other people’s ideas, copyrights or trademarks you are violating the law. Intellectual property is a huge area of concern now due to the advent of the digital age. People take images, content, and use it as their own. And it’s illegal. Now, I have learned to let a lot of stuff go because I am simply too busy to sue everyone who does some rogue stuff. But let me make myself very clear–if you take copyrighted material that belongs to me and use it as your own for publication, web series, or events without having received EXPRESS permission from me or the publisher to do so–I will sue you. More importantly, my publisher is going to sue you. Do not steal people’s content and flaunt it and think it’s going to be okay. I do not care when you came up with the idea–the law looks at who is in the marketplace first and who trademarks or copyrights ideas. If you didn’t know I am an attorney too. A good one. I have watched my first book be pilfered and turned into a major TV show on a major network. Direct content taken right out of the book by women who were contributors to the book and worked on the show. My IP lawyers begged me to sue the network. It’s foul. It’s wrong. I can’t take on a major network, for several reasons, so I had to take that one on the chin. But, I am in a different position now in my life. I am wiser. Have more resources. A huge network of support. If you take my stuff, I will come after you. PERIOD.” — Sophia Nelson, spiritual blogger and author.

IDIOT alert: Al Roker on food even Jews can eat…

Ridiculously, he responds with shellfish and beef — exactly what Jews who keep kosher do not eat. Of course, this is the same weatherman who shit his pants at the White House and announced it on Dateline. 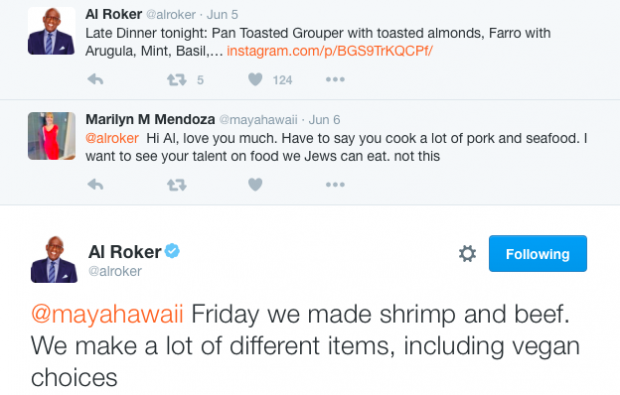 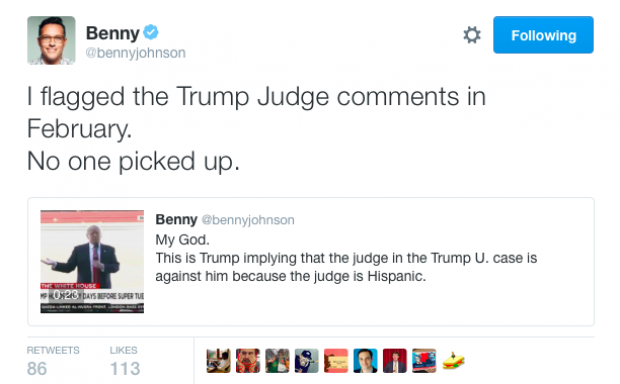