Seems that way given the scant media attention to the group’s murderous persecution of gays since they rose to power. And today folks from President Obama on down have tried to obscure the Orlando shooter’s obvious affinity for ISIS and, by extension, its virulently anti-gay religious beliefs.

But a little-noticed report issued this month by the neocon Counter-Extremism Project lays out the gruesome details of how ISIS treats homosexuals. Basically, just like Omar Mateen, except they prefer hurling gays from rooftops instead of shooting them outright.

The report starts with a harrowing incident to illustrate the ISIS modus operandi: “In early May 2016, an ISIS court charged a young Syrian man with the crime of sodomy. In front of a crowd numbering in the hundreds in Manbij, Syria, ISIS fighters threw the young man from the top of a building as punishment for his ‘crime.’ This is but one case of how ISIS exploits pre-existing religious and social biases against homosexuality among the populations under its control to justify its persecution of gays.”

CEP then notes that, “Human rights observers estimated in December 2015 that ISIS had executed at least 36 suspected gay men within its territory. In a single day in September 2015, ISIS reportedly executed 10 suspected gay men, including a 15-year-old boy. ISIS-appointed courts have declared homosexuality a capital offense and ordered brutal punishments in line with an extremist reading of sharia (Islamic law). One of the most common punishments has been to throw individuals off buildings. Those who survive the fall are then stoned to death by waiting crowds, which also include children.”

Interestingly, the May 2016 incident and the tally by Human Rights groups in December 2015 were both ignored by the New York Times. The Times archive does not include a single reference in 2015 to ISIS killing gays.

But the CEP report cites other horrific incidents like an ISIS judge in Syria last year sentencing “two men to be thrown off a building because it would supposedly cleanse them of their sins.”

One of the men expired instantly when his head hit the ground, but ISIS fighters stoned him anyway. The other survived the fall but was then shot and killed.

ISIS’s treatment of gays is religiously-based, the report makes clear, contrary to efforts by the Obama Administration to separate ISIS from Islam. “According to ISIS’s ideology, homosexuality is an ‘affront to the fitrah’ (natural human disposition). ISIS’s persecution of homosexuals is rooted in its extremist interpretations of the Quran and Islamic sources. According to one hadith (prophetic teaching), ‘When a man mounts another man, the throne of God shakes.’”

“ISIS propaganda refers to homosexuals as belonging to the tribe of Lot, which the Quran accuses of causing the destruction of the biblical city of Sodom because of their homosexual acts. According to the Quran 7:80, Lot said, ‘Do ye commit lewdness such as no people in creation (ever) committed before you? For ye practise your lusts on men in preference to women’  and ‘are indeed a people transgressing beyond bounds.’”

The report concludes that “as  shocking and horrific as ISIS’s carnival atmosphere executions of gay men continue to be, the public’s willingness to participate—as well as the continued persecution of gay refugees outside of ISIS’s territory—demonstrate that ISIS’s actions are built on a well-established foundation. ISIS has cynically exploited these prejudices in order to ingratiate itself among the people it has conquered as well as to further its hateful agenda and impose its extreme and violent interpretations of Islamic law in the wider Middle East and beyond.”

Meanwhile, CEP today highlighted a tweet that might be of interest to law enforcement officials trying to determine whether the Orlando shooter was a “lone wolf” inspired by ISIS or had direct connections to the group. Somebody with the Twitter account @Nidalgazaui who identifies himself as a “17yr. old Freedom Activist” from Germany claimed, “I told you 3 days ago That #IS is Planning Something Big.”

The account holder, who calls himself “Nidal,” linked to his alleged tweet, citing an ISIS source, that the group was using the hashtag “Soon, Soon, you see the unexpected.” 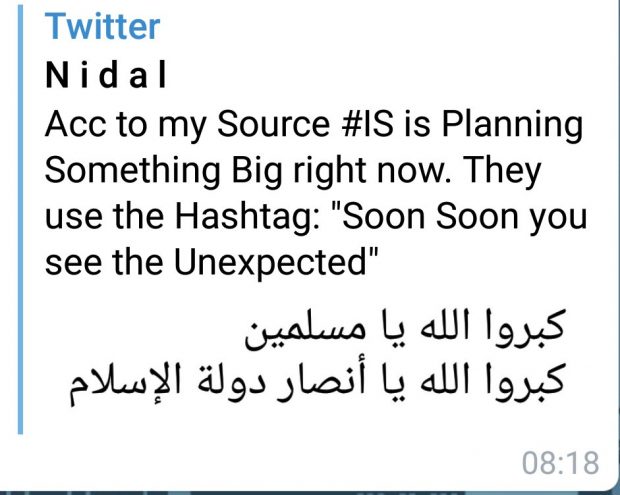 As of early Sunday evening nobody else online seems to have noticed the curious tweets.