For decades, Republicans have preached they’re “Pro-Family,” espousing traditional marriage as best. Emboldened by studies showing children fare best in intact families, and fearing the religious right, the message was simple: Marriage is best, so get married and stay married. But those interested in public policy know, positions need to withstand three tests: they should be reviewed for effectiveness, be comprehensive and stand up to rigorous critique.  Republican policy fails all three.

The effectiveness of Republicans position can be examined using U.S. Census data. 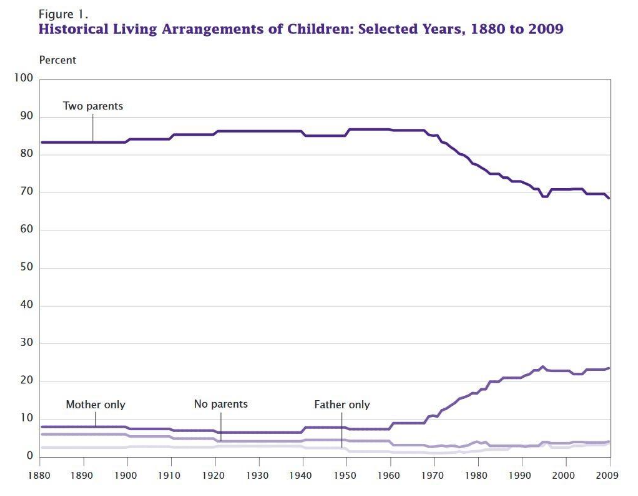 Since the 1960’s, “mother only” homes have increased with a reciprocal decline in children living with two parents. While several factors cause this trend, it’s noteworthy; Republican Governor Ronald Reagan first signed “No Fault Divorce” in 1969, corresponding to the uptick in Fatherlessness. While Reagan called this “one of the worst mistakes I ever made in public office”, in 2010, New York became the 50th state to adopt No Fault divorce.

These results indicate decades of Republicans preaching about intact families has failed the test of effectiveness, as the number of children in two parent homes has eroded substantially.

Despite the 1.5 Million children whose family experiences divorce annually, those not living in two parent households comprising over one-third of all children, the CDC reporting 40 percent of children are born out of wedlock, a record number of Americans having never been married, and more young adults now living with parents than partners, the Republican position on Family has nary a word about any of them with Republicans staying the course; Get married and stay married.  Republicans have failed the test of comprehensiveness because they’ve never even attempted it.

Standing up to Critique 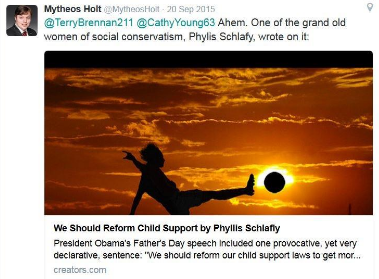 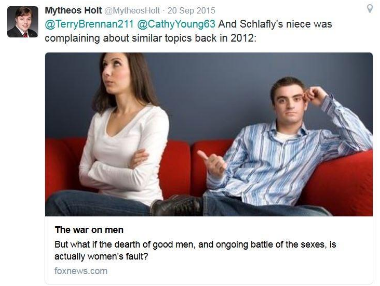 As Phyllis Schlafly and Suzanne Venker are members of LW4SP (of which I’m a co-founder), I’m well versed on their work. But could Republican pundits be so naïve as to believe a book or article is written and laws begin changing?

In another article published by The Federalist, Brad Wilcox wrote “The Divorce Revolution Has Bred An Army Of Woman Haters.” In it Wilcox lumped strong groups of intelligent, credentialed, well studied, articulate, child advocates working state capitals, with others having a nom de plume I’d not mention or respond to. Branding the child advocates with the labels mentioned in Wilcox’s article is simply not helpful in enacting the best policy for children.

Leslie Loftis recently asked “Fatherlessness: What are Republican’s Doing About It?” which decried the existence of “Court created Fatherlessness.” Historically, between 33 percent and 50 percent of children whose family experiences divorce lose complete contact with one parent within 3 years. Using the low estimate, U.S. Family Courts create a fatherless child every single minute of every single day.

These laws also contribute to the decline in marriage rates. As Dr. Helen Smith told Fox & Friends, the out of balance risk has caused some men to walk away from marriage altogether. These men then share their horrific experience in family courts with their sons who are justifiably worried about what divorce might do to them.  Is it then surprising, men view marriage as less important?

Yet Republicans foolishly believe they can fix marriage without first fixing divorce.

While the rhetoric of Republican pundits doesn’t withstand critique, reviewing the actions of Republican elected officials is necessary before a grade is offered.

How Pervasive is Fatherlessness, What Can be Done, and Are Conservatives Working on It?

Fatherlessness is an epidemic as Ben Stein wrote in his article, “A World Without Fathers.” While Republicans think Fatherlessness is a racial issue, since a higher percentage of African Americans are born into fatherless homes, David Hirsch disagrees:

“In absolute numbers, there’s more white children growing up in a father absent homes across America by a factor of two to one”

Newspaper editorials have sized up the problem:

“It is a major, maybe the major socioeconomic, indeed, familial issue facing Ocala/Marion County and the country today.”

Yet national politicians have no understanding. Former U.S. Representative George Radanovich wrote in 2014:

“0 percent of the 537 elected federal officials in Washington D.C. fully understand the relationship between the fatherless child and government costs; that dedicated parenting is essential to the pursuit of happiness and the lack thereof is the common denominator of the runaway cost of government”.

So what should be done?

A multitude of cultural and legal fixes are required to address fatherlessness but preaching to divorced fathers isn’t one of them. In Sitcoms, Commercials, Literature, and Movies, the story is; fathers can’t parent. How should Republicans feel about companies degrading Fatherhood, to sell a bucket of paint or an internet plan? Fortunately, we’re progressing, with Super Bowl XLIX being the year of “Dadvertising”. But to repair the cultural damage the media has done to fatherhood will require more.

Legally, Loftis is right to target “court created Fatherlessness” and the solution is simple. Shared parenting after divorce is best for children, has the endorsement of 110 world experts, is supported by 43 peer reviewed papers, is favored by 70 percent of the population and was the conclusion of the largest study on children of divorce. Even the Council of Italian Bishops endorses shared parenting as best for children and society.

Shared parenting is children spending a minimum of 35 percent of their time with each parent which is required for a child to even have a chance to bond with a parent. Children receive additional benefits as timesharing increases up to and including 50/50. As shared parenting isn’t suitable for every family, proposed legislation maintains judicial discretion to deal with circumstances like abuse, neglect, or abandonment.

With such support, shared parenting should be implemented in Republican states everywhere. Cordell & Cordell, a firm with offices in 30 states, noted:

“It is becoming increasingly clear that any argument against shared parenting is not based on empirical data. Logic would dictate that it should be painless to pass laws that grant children more equal access to each parent following a divorce”

There was hope in Florida as a shared parenting bill passed the legislature. The establishment, known as the Florida Bar Association, reacted, spending $105,000 on “emergency Lobbyists” to obtain a veto. Bar associations promote policies for their attorney membership and they don’t like shared parenting. Why? In voicing support for the Florida bill Catherine Real, an attorney with 38 years’ experience explained, “This will reduce the amount of litigation because of the presumption fathers are going to have equal timesharing with their children.” Less litigation means fewer billable hours, so the Florida Bar acted like a special interest group, suggesting messages to the Governor from non-attorneys would be best, so they should write from their private email addresses to hide their profession.

Instead of following the recommendation of leading researchers, Republican Governor Scott’s veto sided with the Florida Bar and feminists, including N.O.W., whose spokeswoman said, “What did the father do? He contributed his sperm.” Scott also admitted his daughter was divorcing, but had “no comment” if it was his daughter living in Florida. Is this indicative of conservatives working on child custody reform?

Downplaying a reprimand at his state convention, Senator Ben Sasse stated Nebraska is “a well run state.” A ten year study concluded, “Noncustodial parents in Nebraska get an average of five days per month with their children.” The Nebraska Bar Association was sued for lobbying against shared parenting, resulting in its dues being halved, the elimination of staff, and sublet of office space. Judges then began lobbying the Republican legislature, a breach of Constitutional separation of powers, prompting an unprecedented rebuke in the state’s largest paper. Is this suggestive of a well run judicial branch, or emblematic of a legislature doing right by children? Further, is this indicative of conservatives working on child custody reform?

In New Hampshire, the Republican controlled Judiciary Committee killed a shared parenting bill.  In Utah babies are adopted against the will of loving fathers, earning Utah the title “the baby stealing state.” In North Dakota Republicans were silent as the Bar Association misappropriated $70,000 to fund an advertising campaign advocacy groups couldn’t match. Laughably, the Bar claimed they spent $70,000 to defeat the measure so they could be in court less and make less money. These are all red states where Republicans are clearly not working on child custody reform.

The actions of elected officials and pundit rhetoric clearly earn a failing grade for the Republican position on fatherlessness withstanding critique.

Republicans, It’s Time to “Man Up”

Fathers facing sexist bigotry in family courts is anything but unknown.

The public knows it. In 2015, a National Center for State Courts poll found the public believes top groups facing discrimination in courts are the poor, African Americans, and divorced fathers.

Lawyers know it. Cordell & Cordell Managing Partner Scott Trout stated fathers face discrimination in U.S. Courts.  Cici Van Tine, a partner at Burns & Levison, was asked “do you think men are at a disadvantage overall in family court,” and responded, “Currently, yes I do.” Attorney Melissa Isaak said opponents like the status quo for one reason: money. “These family law attorneys are encouraging litigation” she said. Attorney Arnold Fleck agreed: “in my opinion there are many out there who are in it for the money. I’ve heard and seen too much not to believe that.”

Bigotry is a flaw of the human race. Historically, we’ve discriminated for differing race, sex, religion or any other classification. But history also shows there’s one form of bigotry worse than all others: state sponsored bigotry, where a government practices bigotry against its citizens. That Republicans have, for decades, tolerated family court sexism are actions for which they should be judged.

How would Holt and Wilcox have divorced fathers respond to Republican inaction and calls they re-enter a contract already costing them their children, life savings and freedom, because of their gender? Certainly, some belittled African Americans for not liking the bigotry they faced at lunch counters in the 1960’s and suffragettes for not liking the bigotry they faced at voting booths in the early 1900’s. Society would have been better served if those doing the belittling instead listened. Indeed, the difference between Dr. Helen Smith and Holt and Wilcox is, she hears the horror stories of divorced fathers. Better still, how would Holt and Wilcox react themselves if forced to process the emotion of losing their children for all but “standard visitation” because of their gender? From their actions, I’m suspect they’d channel their anger into a positive effort at reform.

Republicans would be better served if they changed their ways; rather than preach, listen. Listen to divorced fathers about bigotry in Republican courts. Only then can they rebuild a party which sides with the people rather than the establishment.

For anyone in power, perhaps the most difficult admission is, “I’ve found the problem, and it’s me.” For Republicans, if you’re not willing to admit this now, you never will. It’s time. Man up on fatherlessness.