Sheer grit, dig-down-deep determination, and a fortitude not matched by most of the toughest men I’ve ever known, were the all-encompassing descriptions – perhaps the only adequate ones – I felt as I watched retired and disabled U.S. Army Green Berets ascending and descending the great Denali (Mt. McKinley), Alaska.  The expedition up the mountain was not only unforgettable; but in many ways a once-in-a-lifetime experience; proving once again that it’s not always the objective gained, but the quest to achieve it. And this I say from the standpoint of having achieved many objectives both in terms of great summits climbed around the world and other harsh, unforgiving environs explored.

From the outset – even in preplanning stages – the Denali expedition was an adventure in the purest sense. Any experienced climber will tell you that any such planning, conditioning, flying into base, and ascending would have to be for a mountain like Denali. And this year, 2016, Denali has proven to be very unforgiving. A mere 18 percent of the climbers as we arrived at Base Camp had made the summit – with two deaths. One unfortunate climber fell to his death this year, and one (not a member of our group) died of high-altitude cerebral edema (HACE) while we were on the mountain.  From base to summit, Denali rises nearly 18,000 feet, the largest elevation gain of any mountain on earth. It is also the most northerly of any mountain over 20,000 feet; with a northern latitude of 63 degrees.

Chief Warrant Officer (CW2) Mike Adkins assumed responsibility for nearly a year. His meticulous planning for all aspects of the climb (gear, food, mental preparation and physical conditioning) brought our four-man team – two retired Special Forces operators, my son and me – to the base of the highest summit in North America. A peak known for its tremendous difficulty due to its proximity to the north pole, terribly unpredictable weather and the fact that most of the other “Seven Summits” involve support by porters or sherpas; not the great one – you pack it you hump it.  For our team we would have to carry all 596 lbs. to nearly 11,000 feet before catching part of the gear and moving up to the final camps enroute to the summit.

We landed at base camp and decided we would begin our move on “Heart Break Hill” at 6:00 p.m.; a climb that would not end on this first day until 4:00 a.m. After nearly four hours of humping gear up the mountain on what appeared to be a beautiful day in one of the most outstanding environs, the weather turned.

From sunny skies we ran headlong into extreme winds and a whiteout of driving snow. It was also at this point that one of our climbers – retired Sergeant First Class Craig Connor (a 100-percent disabled retired Green Beret) began suffering the early stages of acute mountain sickness (AMS) and limping in obvious pain. Though never uttering a word of complaint, SFC Connor had another issue every bit as debilitating as his altitude sickness. His glacier boot inner-sole had been molded improperly with a large rib forming across his Achilles rubbing on every step. As we pushed forward through the whiteout and temperatures that plummeted to ten below, his stride became precariously weak and his posture was nearly completely bent-over attempting to put more weight on his back than on his legs. It was an excruciating position in one of the most arduous environments we had ever witnessed – though never an utterance of discomfort. The only comments in this regard heard by him and fellow retired Green Beret CW2 Adkins were, “Embrace the suck!”

Like Connor, Adkins too was an inspiration. A highly decorated Green Beret, with three combat tours in Afghanistan, he assumed responsibility for all aspects of the operation including planning meals and final equipment list for our expedition. The level of expertise Chief Adkins demonstrated throughout the planning and execution of our movements was impeccable and spoke to years of training in what is considered by many to be one of the world’s finest military organizations.

The third member of our team was my son, Thomas Mullikin, Jr., a Master Naturalist who at 27 years old – and a hyper-fit 123 pounds – was easily the strongest pound-for-pound climber in the group. Thomas Jr. carried with him more than 180 pounds up the side of the glacier and was eager to assist me and the Green Berets in every way possible. In one instance, during the return to Base Camp, Thomas Jr. carried his pack and pulled two sleds; a feat rarely seen on such difficult terrain.  He did all of this without a single complaint and with an unwavering positive attitude, displaying the kind of mental strength that has helped him to conquer several of the highest mountains in the world.

Upon arrival at Camp I (at 4:00 a.m.) we enjoyed a hot breakfast and spent a few hours in our tent. The park was beautiful, and we enjoyed tremendous views from this vantage point. We decided we would move our load just above Camp II.

At this point in the climb, Connor’s boot malfunction became more apparent. After the team moved more than 500 pounds another 3,000 feet and returning to Camp I, Chief Adkins, who was acting as the team medic, asked to take a look at his foot. When he peeled off his boot, the seriousness of his injury was apparent. The flesh on the back of his foot had been chewed off by moving in the defective boot, and the foot was raw and infected. He had climbed nearly 14 miles on the glacier on the highest peak in North America – never once complaining – with a defective molded-liner that chewed his leg to where it looked like a dog had been eating it. This type of steadfast determination, mission focus and depth-of-character is uncommon among most men, but is a defining characteristic of these elite soldiers. Add to these human qualities a deep and abiding faith in Christ and you begin to understand Connor. And perhaps to a greater degree understand the kind of men who wear the coveted Green Beret.

After spending a day in camp with Connor working on his boot and liner, we made the emotionally wrenching decision to descend as a team.  We made a pact at the start of the climb that if one climber was hurt and needed to descend we would move as a team. Except for the foot and terribly malformed liner, we were strong and poised to move toward the summit (subject to the weather), but we took our photos, retrieved all of our cache and began a long and painful descent back to Base Camp.

All was not for naught. Among the various training modules completed by our team were cold-weather survival, land-navigation, rescue (self and team-members) and movement in whiteout conditions; among 19 others.

On the day we decided to return to Base Camp, one climber was rescued/recovered and unfortunately succumbed to HACE and died. We met the Park Rescue team at Base Camp; one of whom Connor had served alongside in Afghanistan. Since returning to the States they have continued serving the nation with Search and Rescue activities in Denali. After retiring from Special Forces, Connor now serves as the senior NCOIC for the historic South Carolina State Guard Mountain Search and Rescue Team.

On our way back down the mountain I had time to consider how blessed I am to live in such a great country with incredible patriots like these retired SF operators. I also reflected on my wonderful family and friends and how accomplished my son, Thomas Jr., has become. He too serves in the S.C. State Guard.

Before we launched, I dedicated this climb to my new granddaughter and to my great friend Chris (last name withheld due to active missions in an elite group of special operators) and his non-profit supporting the families of deceased special operators.

Please visit his website regarding a cross-country motorcycle fundraising effort aimed at raising money and awareness for fallen special operators and their families – http://www.coastxcoast.org – and consider supporting this important cause. 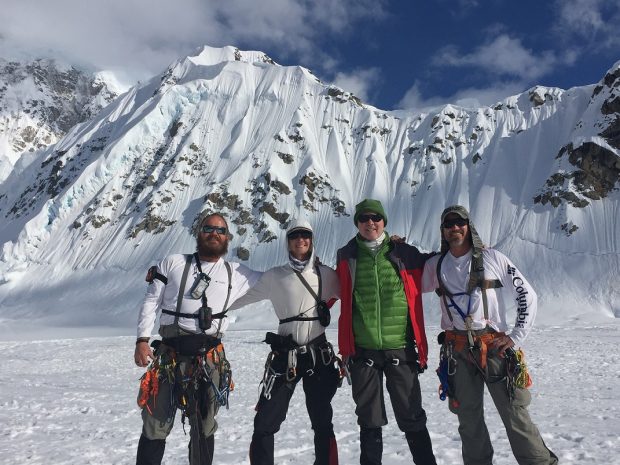