[dcquiz]”Today, Donald Trump’s campaign released some of his plans for his first 100 days in office,” the DNC email exclaims. “The Trump Administration would hit the ground running by:”

“Appointing judges who are anti-choice, anti-LGBT, and share his warped view of the Constitution.”

“Repealing and replacing Obamacare (which he calls ‘job-killing,’ even though our economy has created jobs every month since President Obama signed the Affordable Care Act into law — and Trump provides no word on what he’d do for the millions of Americans who’d lose their coverage).”

“Lifting rules on energy production that are designed to protect the environment, changing immigration policy, and more.” 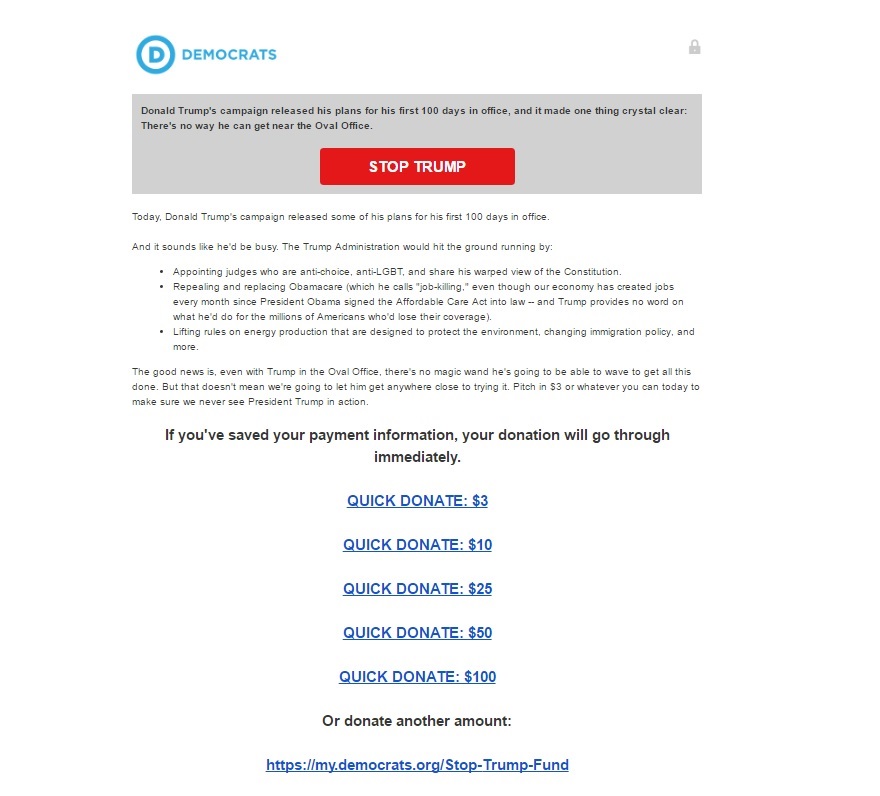 The very first part of the email features a “STOP TRUMP” button. Pressing this button delivers recipients to a webpage offering the opportunity to donate up to $2,000 to the “STOP TRUMP FUND” — by conveniently using American Express, MasterCard, Visa or Discover.

In all, the email offers seven separate links for readers to click and be delivered to a webpage to give money.

The email thanks recipients “for standing with us” and working to keep “a Trump Administration” from undoing “all of the progress we’ve made under President Obama.”

Extremely fine print at the bottom of the email explains that the email has been “paid for by Hillary Victory Fund” — “a joint fundraising committee authorized by Hillary for America, the Democratic National Committee” and the Democratic Party organizations in 38 states.

The 12 state Democratic parties which are not participating in the “Hillary Victory Fund” include California, New York, Illinois and Arizona.

“This organization is powered by you, and we’d love to hear your ideas,” the main text of the email concludes. “Send us any comments, criticisms, or feedback here, or just reply to this email! Thanks for supporting President Obama and Democrats.”

The email address from which the email was sent to The Daily Caller is democraticparty@democrats.org.