Here’s A List Of Some Of The Most Unusual Animals, Reptiles Available At A Typical Wuhan Wet Market
Betsy Rothstein Gossip blogger
July 18, 2016 10:05 AM ET
Font Size:

— Politico Florida Playbook writer Marc Caputo. Others annoyed about having to stay in Akron: LifeZette‘s Laura Ingraham and CBS’s Will Rahn, who may or may not be trying to invade another reporter’s Cleveland digs. In his Florida Playbook, Caputo writes, “Good Monday morning from Akron’s Quality Inn overlooking the Waffle House.”

CONFESSIONAL: “Very much enjoying pretending to be happy to see the same people I avoid in Washington here in Cleveland!” — The Daily Beast‘s Olivia Nuzzi.

BuzzFeed reporter McKay Coppins — a “dishonest slob” — publishes a long first-person piece about his responsibility (or BLAME) in the fruition of Donald Trump’s candidacy.  (More on this later…but read it here.) Daily Mail‘s David Martosko cracked on it, saying, “Gee, it’s all about him. Ridiculous.”

WTF Central: Journalist for The Atlantic explains himself

“I’m gonna play Inside now, then I’m gonna get a quiet dinner. Okay? I’m catching up on the stuff, I promise. OK????” — David Sims, senior associate editor (culture) for The Atlantic.

“Republican National Convention update: A pair of men just rolled a cart past me loaded with tubs of thousands of nachos.” — LAT‘s Matt Pearson.

“My son, bored, while watching @TheOpen: ‘Does Tiger even play anymore?’ Strange how sad that made me.” — Bryan Burrough, writer, Vanity Fair.

IJReview‘s Benny Johnson pours himself into the RNC

“Meet Joyce. She was my seat-mate on my flight to the GOP convention. She’s a 60-year-old Army veteran who served in West Berlin in the Cold War. When the stewardess asked if we wanted a drink before takeoff, I asked for a champagne. “Honey,” Joyce said, “You ain’t a real man unless you’re drinking Jack & Coke.” 5 Jack & Cokes later I had Joyce’s life story & now we’re besties. This is how my GOP Convention experience started.” — Benny Johnson.

After being called a “vulture” for featuring a story by Teresa Vargas who interviews the sister of the one of the slain officers, WaPo race reporter Wesley Lowery explains journalism: “Interviewing folks in times of pain and trauma is, regrettably, part of our job.” Gee, thanks Wes. Where would we be without you explaining the job?

Reporter wants to cover RNC in the nude

“The only possible remaining fresh angle to cover the RNC is to do so naked, screaming and covered in beetles.” — Jezebel‘s Anna Merlan.

“Does anyone else wish Lena Dunham would stop sending out naked pics of herself or is it just me?” — Breitbart News Texas Bureau Chief Brandon Darby.

“How is it almost 1 am and my @AmericanAir flight still hasn’t taken off and people are talking and laughing? I want to shush them all.” — NPR’s Sarah McCammon.

Montel Williams babbles about the decor in Trump’s White House

“One thing – we cannot allow Trump to decorate the White House like his apartment! Enough gold and purple to make the Ayatollah proud!” — Montel Williams, who, for some reason, is supposed to be in Cleveland this week.

“Trump’s Pence speech was like a terrible best man’s speech. Like lamenting there are no good ones left for 20 min. Then saying congrats.” — Lauren Goode, editor, Verge.

“All I need to know about Pence. Weekend in NY, has dinner at Chilli’s.” — Steve Brodner, freelancer writer and illustrator.

Gawker reporter suggests self-mutilation to deal with Trump and Pence 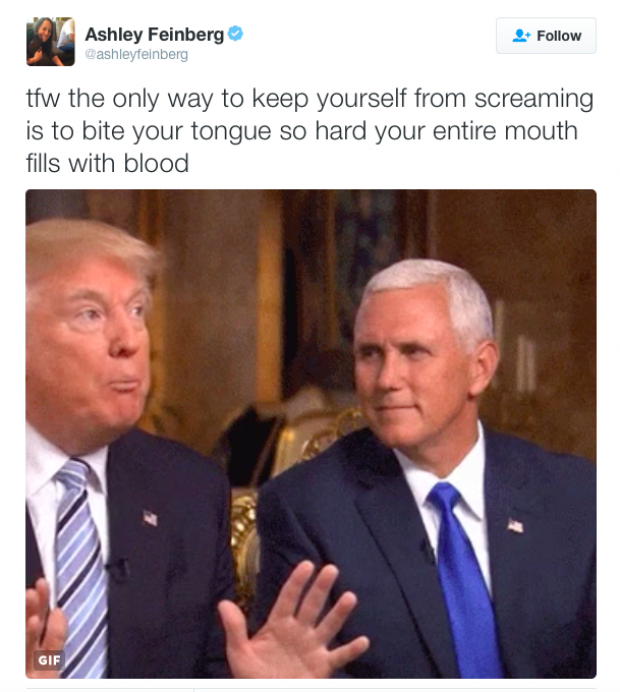 More on this whole thing later…. 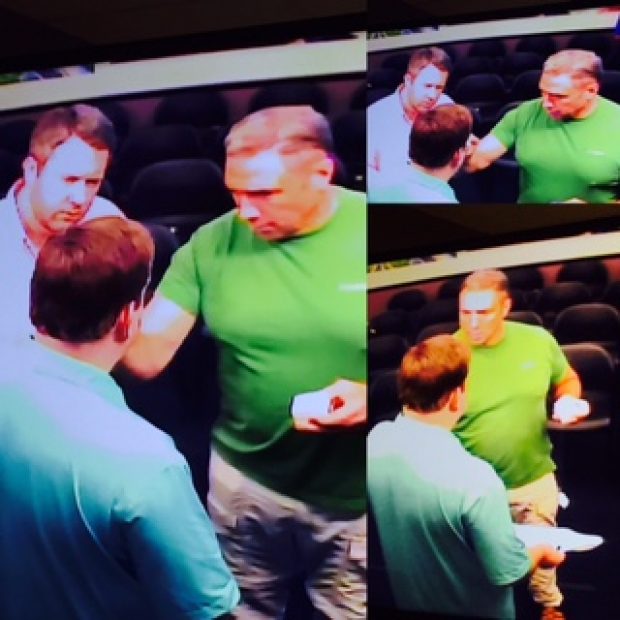 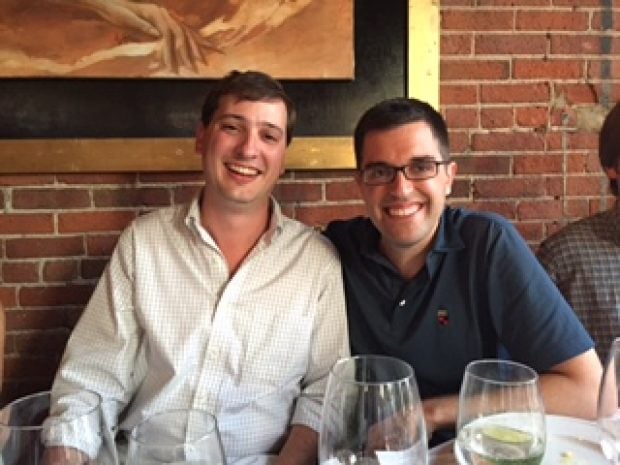 DAILY CALLER DIEHARDS: BFF’s Alex Pappas and Vince Coglianese (too difficult to pronounce, do not try this without help). Pappas has the veal; Conglianese opts for a spicy pasta dish. Somewhere in the background Roger Stone, Trump’s ex-aide but still a surrogate, is  furiously scrounging for food that he finds at another table. At one point he whispers something conspiratorally,  “Do you have any pull here?” With that, leaves the table to find food elsewhere in the restaurant. Minutes later, a beautiful plate of cheese, olives and meats arrives accompanied with thick slabs of warm bread.

Wondering what that painting is above their heads? It’s this. 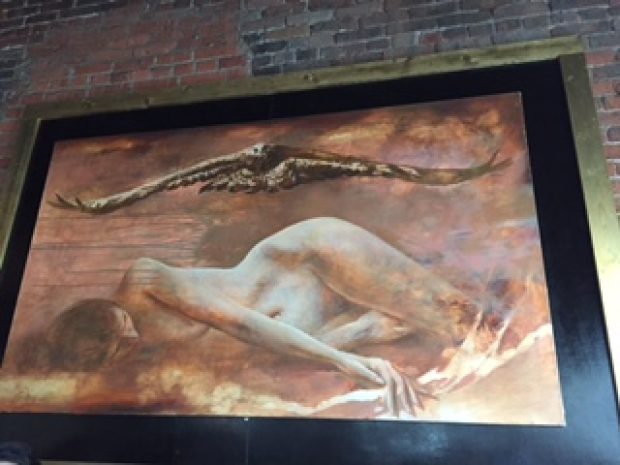 At one point Jones feeds Labash pasta from his plate, but it happened too fast to photograph it. You’ll have to take my word for it. Labash looked surprised — or maybe startled/horrified is a better word here — but he rolled with it. When another man feeds you it’s difficult to stop that sort of thing. 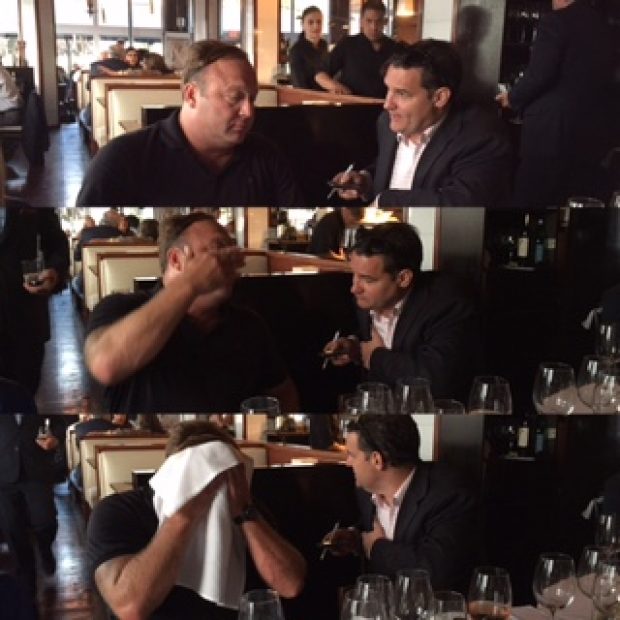 1
'Lost The Credibility': WHO Faces Mounting Backlash For Aiding China's Coronavirus Cover Up
World
2
Fire At Florida Airport Destroys 3,500 Cars
US
3
Was The Stockpile Shortage Under Obama A Result Of The Tea Party? Not So Fast
Media
4
Zoom Teleconferencing App Exposed Data To China
Tech
5
Joe Rogan: 'I Would Rather Vote For Trump' Than Joe Biden
Media