An army of 167 interior designers work at the Department of Veterans Affairs, picking window blind colors and buying millions of dollars of art each year, an investigation from The Daily Caller News Foundation has found.

The designers’ salaries are not included in recent findings that the VA has spent $16 million on art during the Obama administration. At least a dozen individual pieces of art cost a quarter million dollars or more each. Nearly $700,000 was spent on two sculptures at a hospital for blind veterans, the Palo Alto Polytrauma and Blind Rehabilitation Center.

At $100,000 in combined salaries and benefits — many actually make more — the cost of employing those 167 designers would add up to $17 million a year, or $136 million during the eight years of the Obama administration, making the salaries of the people in charge of picking out art dwarf even those art costs.

The list of VA interior designers from 2011 — created by a company seeking to sell to the VA, and spotted online by the Daily Caller News Foundation — shows that virtually every hospital has an interior designer, with some having many. It’s unclear what could possibly keep them busy full-time, considering the bulk of the work would come during major renovations or construction of a new wing.

The 167 designers are spread among the VA’s 75 hospitals and regional offices. The Cleveland hospital has five on staff. The Pittsburgh and Dallas hospitals have three each. The scandal-plagued San Juan, Puerto Rico hospital — which has multiple felons in high-level positions — also has three.

In San Juan, Aurelio Martinez is the designer in charge of purchasing art for the hospital, which has spent $600,000 on art since 2009, including $56,000 to the small local gallery Omart Gallery Inc.

The picture below, obtained by theDCNF, shows that on at least one occasion, Martinez selected art created by … himself. 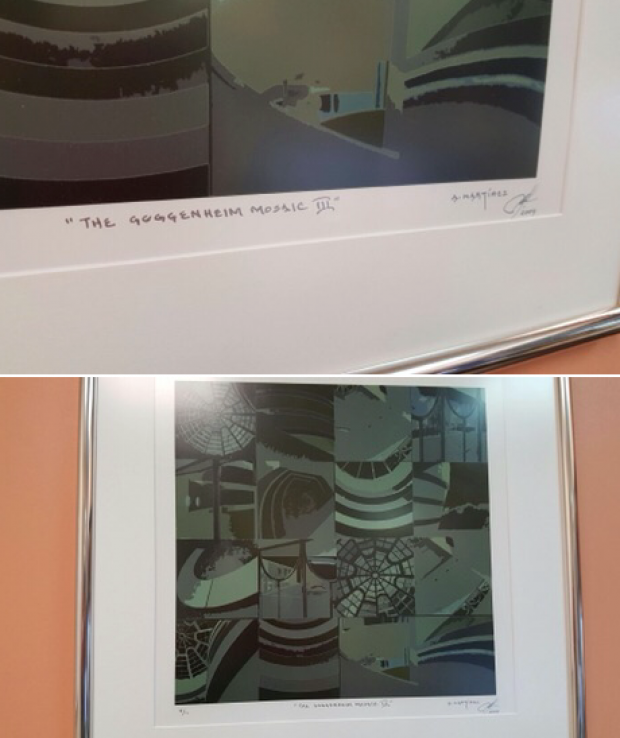 The artwork of a VA interior designer

Axel Roman, spokesman for the hospital, told TheDCNF that “the art attributed to Mr. Martinez was provided by him at no cost to the VA, as a way to honor our veterans by contributing to the healing environment.”

He said the hospital has added “more than 600,000 square feet… The amount spent in artwork for these projects represents less than one half of one percent of the total cost of the constructions.

“The scope of an interior designer in the VA system goes beyond selecting artwork. Among other functions, they design space for services to veterans, select and coordinate the installation of furniture and design areas where high- technology medical equipment will be installed. Artwork is one of the many facets that create a healing environment for our nation’s veterans.”

Non-profit government spending watchdog OpenTheBooks.com first reported the story about the VA’s acquisition of art at prices associated with the most elite artists in the world.

He said there is no reason to spend hundreds of thousands of tax dollar on a single piece of art when veterans create artwork the VA could have for free, sometimes as part of department’s therapeutic programs.

“Veterans have their own art museum. Why is the VA spending millions on lavish art when veterans are already producing great art? Veterans themselves should benefit from art displays, not vendors who sell the VA pricey art,” Andrzejewski said.

The art spending has irked Congress and veterans because the VA has claimed it will be forced to let veterans go neglected unless Congress increases its budget. Patients have died waiting for care, and the department reneged on its obligation to pay for veterans’ doctors bills from private doctors.

After repeatedly being on the front pages and before congressional committees, Tomah officials revealed their “100 day plan” for a dramatic turnaround. The plan barely addressed veterans, and called for building an “employee wellness center” and hiring more minorities. Also part of the plan was hiring an interior designer at $77,000 a year, plus benefits.

The recruitment ad said the person hired would be in charge of “accoutrements” like “window treatments” and said the facility preferred either a current federal employee or someone with a “Ph.D. or equivalent doctoral degree” in interior design.