At 66, Arianna Huffington is once again reinventing herself.

In 2005, she created The Huffington Post, an enclave for liberal writers to hang their hats. She brought in sleep rooms — because that’s a good message to send people, that your reporters are sleeping — and meditation, because reporters need to stop being machines and think every once in awhile. They posed for pictures in pajamas from her bureaus all over the world. She also brought in a vacation policy that allowed an employee’s emails to be automatically deleted so the person could really be on vacation without the nuisance of workaholism.

In April, she paired up with Airbnb to offer two people a chance to sleep in her bed. It was to promote her book The Sleep Revolution. And she had rules: No Ambien or other sleep meds, no spicy food before bed, no phones in the bedroom and no books that involved work.

As much as these things were the butt of many jokes about her, she was and is onto something.

During the 2016 presidential campaign, Huffington has been at the center of a controversial policy that took Donald Trump off the site’s news section and put him into entertainment alongside Kim Kardashian. It wasn’t the brightest strategy (that has since been revoked) considering he wound up being the GOP nominee. But you can hardly blame her since “Mr. Trump” once said this about her:

I asked HuffPost media writer Michael Calderone for a comment on his boss leaving. The snake (joking) writes me back this: “Hey! Unfortunately, just got off phone with Arianna and now have to write up myself.”

The search for a new editor-in-chief is on.

There’s a staff meeting at 11 a.m. which should shed new light on all of this.

I can’t end this post without resurrecting the best Daily Caller item on Huffington of all time: BOOBS ARE TOUCHING. This was a post about Huffington pairing up with MSNBC “Morning Joe” co-host Mika Brzezinski for an event called “Metric Live.” It involved the concept that there’s more to life beyond money and power — except both women seem to have enough of both. 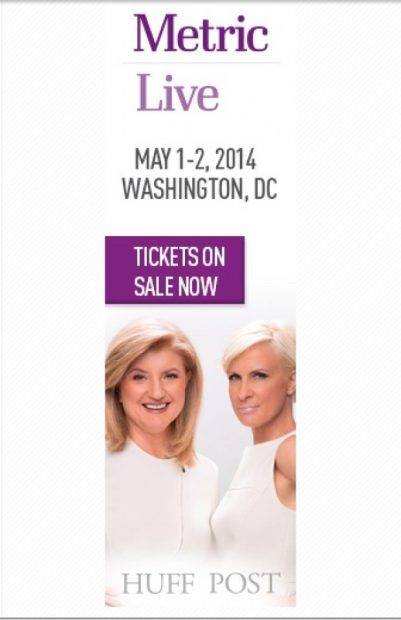 Our core DNA of unleashing the world’s best builders of culture and code is happening again today. After an unprecedented partnership over the last five years that took The Huffington Post from a U.S. blog site to a global media powerhouse, Arianna is following her passion to devote herself full-time to her new venture, Thrive Global. The Huffington Post will continue its push to become the #1 global leader in news and information and the leadership of The Huffington Post is prepared to take the mission to the next level.

Arianna is an undisputed new media pioneer, and The Huffington Post is nothing short of an iconic brand. We want to thank Arianna for her entrepreneurial spirit, vision and leadership in helping to build The Huffington Post into the successful and thriving news platform it is today. We know she will bring the same passion to Thrive Global and we believe that Thrive Global will help transform the wellness industry.

The Huffington Post has been working on a next generation strategy over the last few months and the CEO of The Huffington Post, Jared Grusd, will lead the implementation and communication of that plan, which focuses on scaling news and video on an even more global basis. We have formed an interim editorial committee (Ryan Grim, Liz Heron, Katie Nelson, Kate Palmer, and Whitney Snyder) that will be stepping in to fill Arianna’s role and they will be involved in an ongoing search for a new Editor-in-Chief of The Huffington Post. We know that our exceptional team will continue to deliver the powerful reporting, writing and analysis that draw more than 178M people worldwide to visit The Huffington Post on a daily basis.

The Huffington Post is a critical pillar of our strategy and is only becoming more important with our recent moves into AR/VR with RYOT. As the connected world expands and the global need for news and information expands, The Huffington Post is well positioned to be a leader for decades to come.

We will have a proper celebration for Arianna before she leaves to change the world again — and we will continue the mission and innovation of The Huffington Post with our incredible team. Let’s make news — TA

“Earlier this year the editorial employees at The Huffington Post unionized with the Writers Guild of America, East. With an engaged, thoughtful bargaining committee we have been working hard for months to craft a contract that addresses the employees’ concerns and aspirations. That important work will continue, just as the important work of HuffPost’s employees will continue with a new management team.

Arianna Huffington is a pioneer in digital media, and the writers, editors, producers and other content creators at this pioneering enterprise will remain at the forefront of the digital media project as it continues to expand and mature.”