Bombshell emails released by Judicial Watch on Monday show that in June 2009, two longtime Hillary Clinton friends and donors asked the then-secretary of state for help for a “major client.”

The emails, which were not among the records that Clinton gave the State Department in Dec. 2014, show that Clinton aimed to help her two associates, Kevin O’Keefe and Kevin Conlon.

“Let me know when you are well enough for me to ask you to do a couple of things,” O’Keefe, a Chicago-based attorney and former Bill Clinton White House official, wrote to Clinton on June 25. She was recovering from an elbow injury at the time.

Clinton wrote back, but the State Department redacted her response. O’Keefe responded, writing that Conlon “is trying to set up a meeting with you and a major client.”

In his email on behalf of Conlon, O’Keefe also asked Clinton to keynote an event for Richard Daley, then the mayor of Chicago, where O’Keefe works and where Clinton was born. 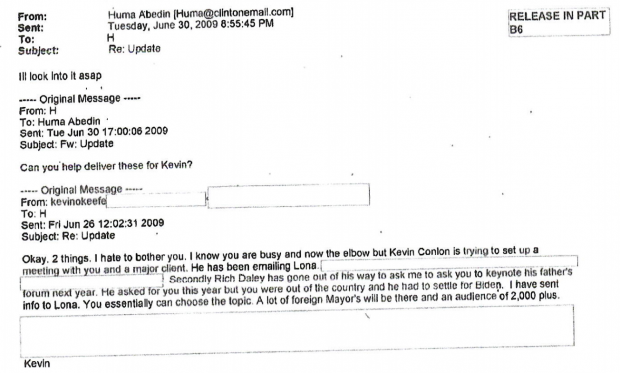 “Can you help deliver these for Kevin?” she wrote to Huma Abedin, her deputy chief of staff at the time.

The emails provided to Judicial Watch are from Abedin’s email accounts. They were released just hours after The Washington Post reported that the FBI found nearly 15,000 documents on Clinton’s private email server which she did not give the State Department in 2014.

Clinton has claimed that she gave the State Department all of the work records she had in her possession at that time. She ordered her lawyers to delete all of the other documents contained on the server.

The State Department will not start releasing the 15,000 documents until October, just weeks before the general election.

“These new emails confirm that Hillary Clinton abused her office by selling favors to Clinton Foundation donors,” Fitton said in a statement. “There needs to be a serious, independent investigation to determine whether Clinton and others broke the law.”

Judicial Watch also released emails on Monday which show that Clinton Foundation adviser Doug Band coordinated with Abedin to set up a meeting between Clinton and the Crown Prince Salman of Bahrain. As of 2010, Salman had pledged at least $32 million to the Clinton Global Initiative, an arm of the Clinton Foundation.

Earlier this month, Judicial Watch released emails from Abedin’s account which show that Band asked for favors on behalf of Gilbert Chagoury, a Nigerian-Lebanese billionaire who has donated at least $1 million to the Clinton Foundation.

The Clinton campaign announced last week that is the former first lady is elected president, the Clinton Foundation will stop taking donations from foreigners.