But what about this time? After reading all of the New York Post‘s coverage on this story to date, I can’t find one little piece of information that seems relevant:

How did they get this stuff?

Here’s one of their follow-up pieces, by Rebecca Rosenberg, Carl Campanile, and Bruce Golding:

[Huma] Abedin, a top Hillary Clinton aide, released a statement saying, in part, “I have made the decision to separate from my husband.”

But further texts obtained by The Post show the ex-congressman had been expecting that news. He told his sext buddy that his nearly six-year marriage had been “busted” by the scandals he had forced Abedin to endure.

“Further texts obtained by The Post.” What, did they fall out of the clear blue sky?

During their very first exchange, on Jan. 23, 2015, Weiner asked the woman via a Twitter direct message about her “status.”

“Divorced after 16 years,” the 40-something answered.

“I kinda envy that path now that I have a 3 yr old and a busted marriage,” Weiner, 51, replied.

Okay, so this separation has been a long time coming and he was under no illusions about it. That’s good to know, I guess?

The mystery woman also gave the Post a statement:

“I’m not a psychologist. I can’t say how to fix him. I don’t know if divorce or salvaging his marriage would fix him. But he’s broken.”

Well, if he wasn’t broken before yesterday, he sure is now.

The story also has 9 screenshots of Twitter direct messages between Weiner and the mystery brunette, who we’re told is a Trump supporter and an NRA member. Here’s one of the exchanges: 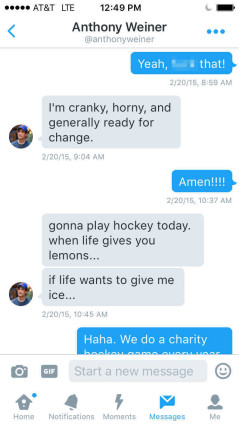 So did the Post somehow get their hands on this woman’s phone? Or did she take these screenshots herself and give them to the Post? Or did somebody hack her, or him, or both? Did Anthony Weiner’s lie from five years ago (“I was hacked or pranked or whatever it is”) finally happen for real?

If it’s none of the above, then I can’t figure out how they got this stuff.

Mind you, I’m not making excuses for the guy. His apparent need to be publicly humiliated has brought him to this place, and the consequences are nobody’s fault but his own. He did this to himself.

More importantly, I sure do love me some Weiner puns.

But it seems very strange that we don’t know where all these private messages came from. In an age where Gawker can go under (and deservedly so) for publishing a celebrity sex tape, it doesn’t seem unreasonable to ask.

This anonymous woman talked to Anthony Weiner for over a year and a half, sending him pictures and friendly messages, and she says she doesn’t think he’s a bad guy. She claims she has nothing against him. If that’s the case, maybe she can help him out by telling us how the Post got all this private information.

Who are you, mystery brunette?

1
'You Can Take Your Mask Mandate And Shove It Right Up Your Ass': Dan Bongino Vows To Defy Mask Order
Media
2
JONES: I Am Black And I Am A Democrat. But 'I Ain't' Voting For Joe Biden This November
Opinion
3
Another Philadelphia Eagles Player In Hot Water Over Comments About Jewish People
Sports
4
Shepard Smith Gets A New Gig
Media
5
Ilhan Omar Calls For The 'Dismantling' Of US Economy, Political System
Politics