Carolina Panthers quarterback Cam Newton is being sued for $270,324.47 for property damage and lost rent to a $11 million Beverly Hills mansion he rented during the offseason.

Newton rented the California mansion for $123,000 for the summer through a luxury rental company managed by Stacy Keibler’s husband Jared Pobre, according to TMZ.

Carolina Panthers quarterback Cam Newton walks off the field after loosing to the Denver Broncos during an NFL football game in Charlotte, North Carolina in this November 11, 2012 file photo. REUTERS/Chris Keane/Files

The Carolina quarterback had apparently agreed not to host any parties with more than eight guests or allow smoking in the house, but didn’t keep that agreement. According to TMZ, the housekeeper told the rental company Newton threw multiple parties leaving “cigarette ashes all over” the $11 million crib.

At one point during Newton’s rental period, the company warned Newton to cut our the partying, but he responded by telling the housekeeper to stop snitching on him, TMZ reports. 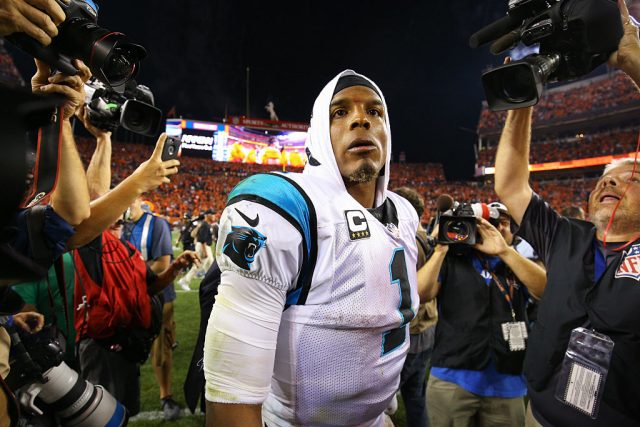 DENVER, CO – SEPTEMBER 8: Quarterback Cam Newton #1 of the Carolina Panthers walks off the field after losing to the Broncos 21-20 at Sports Authority Field at Mile High on September 8, 2016 in Denver, Colorado. (Photo by Justin Edmonds/Getty Images)

The reigning league MVP allegedly caused $90,324.47 thousand in damages to the luxurious pad over the course of the summer. Pobre claims they requested compensation from Newton, but he never paid, TMZ reports.

Pobre and the rental company are now going after Newton for his initial damages plus an additional $180,000 in rent lost during home repair, totaling $270,324.47.

Damages included a broken refrigerator, water damage to the floors, ruined linens and a $32,000 rug that was allegedly destroyed.