The videos show a moment from the aftermath of Wednesday night’s third presidential debate, when Clinton briefly spoke with reporters aboard her campaign plane. As Clinton speaks, Merrill can be seen behind her typing on his phone, then showing the phone to Mitchell, who tilts her head upward in an apparent acknowledgment. 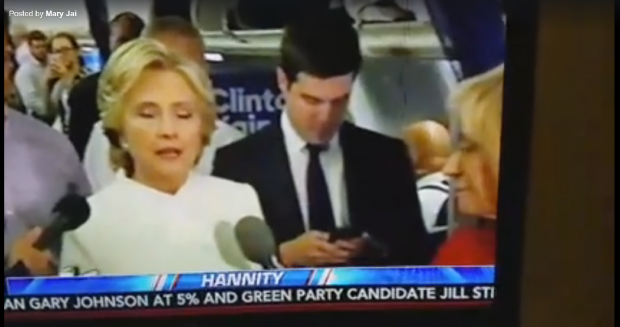 Clinton spokesman Nick Merrill typing on his phone before showing it to Andrea Mitchell. [YouTube screengrab/https://www.youtube.com/watch?v=KYfdc36HnHo&sns=tw]

No words are exchanged between Merrill and Mitchell and it’s impossible to tell what was actually on the phone. But a few seconds later, Clinton finishes speaking, and allows Mitchell the opportunity to ask the next question. Mitchell then delivers a softball question.

“How did you feel when he [Trump] said, you know, ‘Nasty woman, nasty woman,’ and ‘You’re a puppet,’ and … the issue of Vladimir Putin?” Mitchell asks (while Trump did call Clinton a puppet, it was in response to Clinton calling him Putin’s puppet first). Clinton used the question as an opportunity to attack Trump for failing to accept that Russia is tied to the efforts of WikiLeaks, despite many intelligence agencies and experts saying that is the case.

Watch the whole incident from two different angles below.

In the first of the two videos, Merrill can also be seen later on apparently giving a “check your phone” gesture to somebody in the crowd in front of Clinton. It’s unclear if he is gesturing to a reporter, a Clinton campaign staffer, or somebody else entirely.

The Daily Caller News Foundation reached out to both Merrill and Mitchell. Mitchell responded with a strong denial of any impropriety.

“I was on live and couldn’t see in the crush of the gaggle – but no way would anyone try to give me a question,” Mitchell said. “That would never happen.”