I’ve said it before and I’ll say it again: The only “October surprise” this election will be if anybody can give me a reason to vote for Trump or Clinton, rather than against one or the other. Neither candidate has convinced me they’re suitable for the Oval Office, and even their own lackeys and adherents don’t seem to trust or respect them very much.

That’s why all the Wikileaks revelations have left me cold. I guess it’s good to get confirmation of what we’ve known all along. Yeah, the Democrats and the media are utterly corrupt, they’re in collusion, and they barely even try to hide it. But we knew that. It’s not really news. A lot of people don’t trust the media, and they shouldn’t. It’s a big reason why Trump was able to get the GOP nomination. (Which is why Hillary is going to win, unfortunately, but…)

Anyhow, at this point I’m just in it for the laffs. And this latest Wikileaks story is amusing, if you really don’t like Hillary. Joe Tacopino, NY Post:

“Yes. If she feels need to address Jeb directly — would suggest the pivot,” Clinton’s director of communications, Jennifer Palmieri, wrote, referring to the remarks the team was preparing.

Abedin responded, “She’s going to stick to notes a little closer this am, still not perfect in her head.”

Now, one interpretation of “not perfect in her head” could be, “She hasn’t gotten all her lies straight, so she’ll be relying on the ones we write down for her.” Which is plausible. When you lie as much as Hillary does, you need a whole team of experts behind you.

But another interpretation is that she’s suffering from some sort of lingering health problem. “Still not perfect in her head” could be meant literally. Which is something that Team Hillary would be vigorously denying right now, if we didn’t already have hard evidence of her failing health:

Unless Hillary Clinton literally collapses in public again, and possibly even if she does, she’s probably going to be elected the next President of the United States. It’s in the public interest to know what’s wrong with her. We need to know why she’s “still not perfect in her head.”

Hey, if she wanted to keep her health problems private, she shouldn’t have run for president. 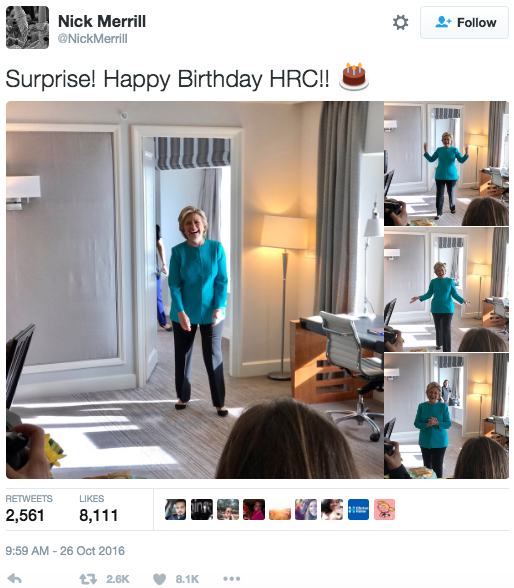 Yeah, never mind all that stuff I just said. Clearly she’s the very picture of health. She made it all the way across the room without falling down once.

P.S. And congratulations to Huma’s husband on being named America’s Creepiest Celebrity!

1
Trump Orders Thousands Of US Troops To Leave Germany
World
2
15 People Died In The Protests And Riots Following George Floyd's Death. Here's Who They Are
US
3
All 57 Members Of Police Unit Resign ‘In Disgust’ After 2 Officers Suspended For Pushing Elderly Man
US
4
Poll: 56% Of Americans Believe Police Are Behaving Appropriately Or Not Being Aggressive Enough
US
5
Andrew Cuomo Complains That Looters Are Getting Out Of Jail — His Bail Reform Opened The Door
Politics