Mike Pence is “really grateful” no one was injured Thursday night when the plane carrying him skidded off the runway on a landing in New York.

The Boeing 737 was carrying 37 people, including campaign staffers, press and flight crew, when it landed at LaGuardia Airport on a wet runway in cloudy conditions. Those on board couldn’t see a thing, but knew something was wrong as the plane veered off the runway and then came to a stop.

“We just immediately felt heavy braking on the runway and the plane fishtailed a little bit,” Pence said on Good Morning America Friday. “Just for a few seconds you could feel us bouncing off and with mud splattered up on the windows we figured we were off the runway.”

“It was about ten seconds of uncertainty as we landed…” said Mike Pence of his plane incident on @CBSThisMorning https://t.co/CAyFmVHl8U pic.twitter.com/59ZDcW2KIZ

One passenger tweeted footage of the reaction captured just as the plane came to a halt.

The plane was evacuated after it came to a halt in the grass, after it tore through two tracks of concrete. The Federal Aviation Administration attributed the successful stop to crushable concrete runway safety technology. The passengers were greeted by first responders. 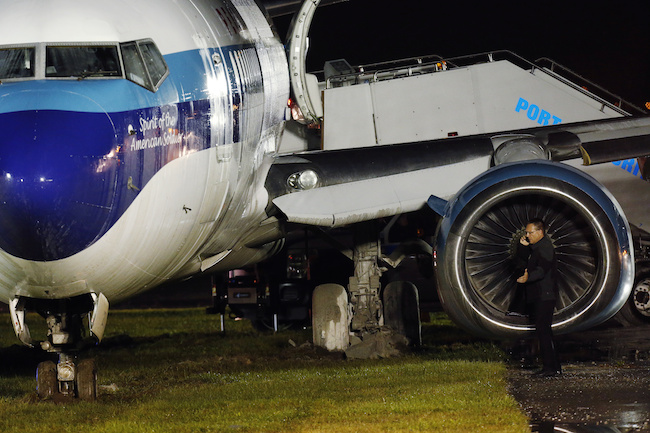 A man speaks on his phone after inspecting a campaign plane that had been carrying U.S. Republican vice presidential nominee Mike Pence after it skidded off the runway while landing in the rain at LaGuardia Airport in New York, October 27, 2016. REUTERS/Lucas Jackson 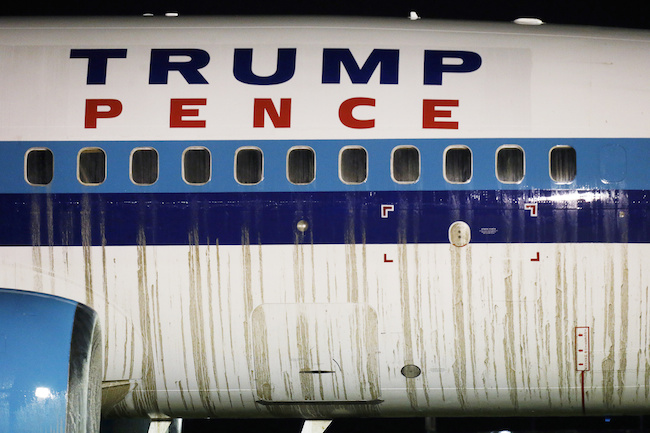 Mud is seen on the side of a campaign plane that had been carrying U.S. Republican vice presidential nominee Mike Pence and skidded off the runway while landing in the rain at LaGuardia Airport in New York, October 27, 2016. REUTERS/Lucas Jackson

“Pence was actually chatting up the first responders, he was really calm, freaking unflappable the entire time,” one of the passengers told Politico.

“You really didn’t know the gravity of it until you got outside and saw the damage that it did,” another added.