“We need to figure this out,” Clinton communications director Jennifer Palmieri wrote Feb. 12, 2016.

Emails published Thursday by WikiLeaks show a flurry of correspondence three days after the New Hampshire primary, when the campaign team responded to an appeal from former Bill Clinton Secretary of Labor Robert Reich. Reich was highly critical of the superdelegate process in the selection of a Democratic presidential nominee.

“I think the race for who the Democratic nominee will be should be decided by the voters, not by a handful of party elites,” Reich wrote. “If you agree, please sign my petition with Democracy for America calling on all Democratic superdelegates to pledge right now that they will support the candidate who wins the popular vote.”

Sanders crushed Clinton in the New Hampshire primary, but Clinton received as many delegates as Sanders because she had the support of superdelegates, party leaders and elected officials who were not bound by the popular vote. (RELATED: CNN’s Tapper Challenges DNC Chair To Explain ‘Rigged’ Superdelegate System [VIDEO])

Clinton campaign manager Robby Mook asks, “Just so I’m clear–we’re looking for a press strategy on this? Or a strategy to retain our people?”

“Both,” responds Tina Flournoy, chief of staff to former president Bill Clinton., who notes the issue is “gaining traction. Can you get a breakdown of the superdelegates? Race/gender etc…Do we have a message around this.” 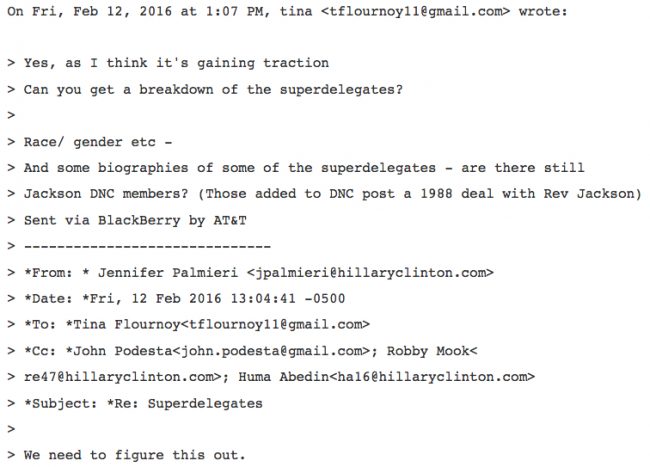 Reich’s letter also mentions that “Even though Bernie [Sanders] won New Hampshire by an absolute landslide, the press claimed that he and Hillary Clinton were leaving the state with an equal number of delegates — because most of the state’s superdelegates are promising to vote for Hillary at the convention.”

Flournoy questions whether “[Jesse] Jackson DND members” might help and refers enigmatically to “a 1988 deal with Rev. Jackson.”

At the 1988 Democratic convention, Jackson was permitted to speak, but his platform was largely ignored by the party.