The unattributed blurb, perhaps written by the magazine’s editors*, is rife with cliches and Democratic talking points that totally overwhelm what would have been a predictable reality had Hillary Clinton actually won the White House. Newsweek printed and delivered 125,000 copies of the special commemorative edition in anticipation of what they thought would be her win, and Clinton herself even began autographing copies.

After her stunning defeat, the magazine was forced to issue an embarrassing and expensive recall and publish the “President Trump” version of the issue instead. Good thing, because as this photo of the first page shows, the issue was out of control in its adoration of Clinton. “No stranger to trudging through the mire of misogyny in her career as first lady, senator and secretary of state, President-Elect Clinton continued to push for an issues-based campaign,” the magazine gushes.

So The Daily Caller News Foundation went through the blurb and underlined all the Democrat talking points in red and the cliches in yellow. As you can see there’s not much else left. 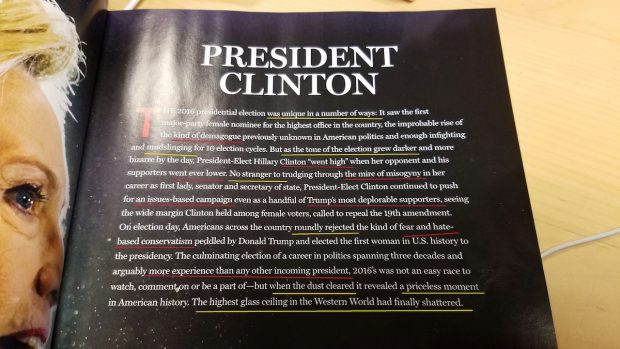 There are eight Clinton campaign talking points, ranging from the absurd claim that she “went high” to the characterization of Trump’s supporters as “deplorable” to the ever-repeated line that Clinton is the most “experienced” candidate ever. There are eight cliches as well, including such classics as “when the dust cleared,” “glass ceiling,” and “priceless moment.”

Seriously, if you know where TheDCNF can obtain a copy of this Newsweek issue signed by Clinton, please send us an email.

*Update: Actually, TheDCNF found out Wednesday night that the paragraph was written by a third party that Newsweek contracted with, and that in fact no one at Newsweek reads the commemorative editions before they are published.