I’ve disagreed with Newsweek’s Kurt Eichenwald a few times on Twitter — where we both spend far too much time — and I’ve watched his many, many slap-fights with his other critics. He tends to follow the same pattern whenever anybody stumps him and he has no answer: Feign outrage, play victim, repeat until the other guy gets bored. It’s a fairly common tactic among lefties, but few are as devoted to it as Kurt is. The great thing about watching him attempt the same schtick on TV is that he brings stage props!

Here’s Eichenwald on Fox News last night talking to your pal and mine, Tucker Carlson. Tucker asks Kurt a simple yes or no question, and… well, just watch. It’s one of the strangest interviews I’ve ever seen:

Just the other day, after one of Kurt’s previous Trump-related meltdowns, I speculated about his interest in arts and crafts:

As it turns out, I was pretty close! 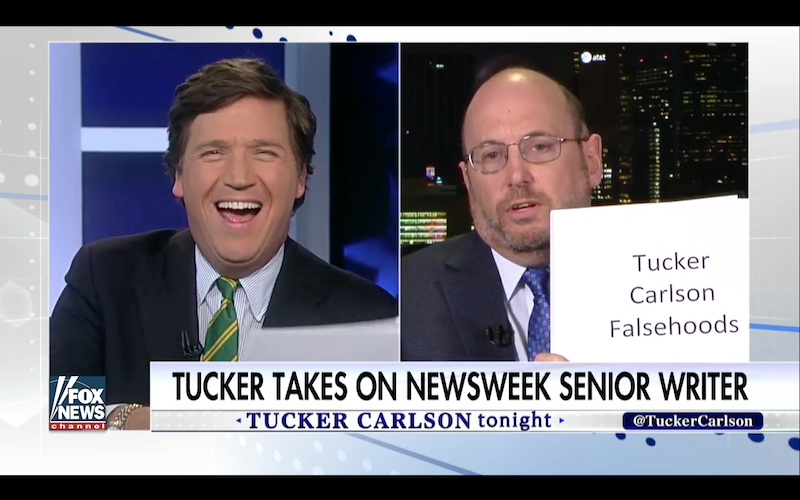 I wonder if he keeps files like this on all his enemies? Binders full of venom.

When you live inside an impenetrable bubble of self-regard to protect your precious ego, you can’t even answer a simple question about something you got wrong. There’s a lot to like about this interview, but my favorite part is when Kurt sneers, “Here’s how a journalist would ask that question.” And it’s the question Tucker just asked him.

And the following exchange really sums up the state of American journalism in 2016:

Carlson: Do you have evidence that [Donald Trump] was in a mental hospital in 1990, or don’t you?

Eichenwald: Reality is not always able to give you a yes or no answer.

I wonder if a young Kurt said the same thing to his mommy when she walked into the kitchen and found the broken cookie jar?

Kurt followed up this triumph with a frenzy of, yes, tweets. Which he then deleted.

.@kurteichenwald deleted his tweetstorm about @TuckerCarlson. I managed to screenshot most of it. pic.twitter.com/PxH79OnqWh

So… that went well.

Should Newsweek reporters get away with making unsupported assertions about presidential candidates because, somehow, Twitter doesn’t count? Is it a generational thing? Does Kurt think his claims aren’t real unless they’re printed on a piece of paper? Or is he just being a silly goose?

Kurt Eichenwald never did back up his claim that Donald Trump was in a mental hospital. Should Eichenwald be in one?

Reality is not always able to give you a yes or no answer.

Update: And here’s what they were talking about in the first place.

Well…this is a twist. @kurteichenwald pic.twitter.com/vkn6b6qbWO 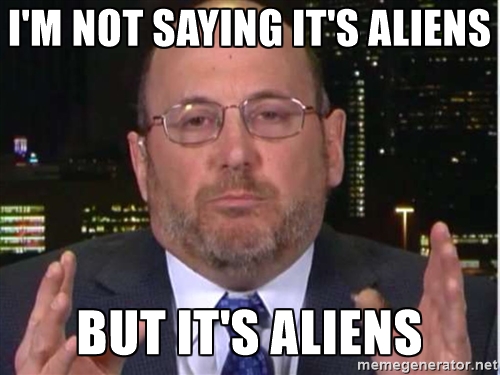 Update: This whole thing just keeps getting weirder. Eichenwald now claims that another Twitter user, who sounds like an alt-right account, used an animated GIF to induce an epileptic seizure. Newsweek says they’ve confirmed it. If this is true, I hope Eichenwald gets justice. Disagreement is fine. Mockery is fine. But that’s way over the line.

If it’s not true, if it’s just him once again playing victim to save face… somebody please help this guy. Sincerely.

Update: David Rutz at the Washington Free Beacon is the master of the supercut. I think this if the first time I’ve seen a supercut consisting entirely of material from the same interview.

Meanwhile, on the other side of the aisle, here’s something that only deepens my suspicions about Eichenwald’s tale:

This frames Eichenwald as a victim of Trump supporters, and treats an unverified accusation as fact. Why do I feel like I’ve heard this story before?

I’m not saying he’s lying. I’m just saying we’ve already seen one hate-crime hoax this week, and the initial media reaction was exactly the same. I’m gonna wait and see on this one.