Turkish news outlets lit up this weekend after a former Republican lawmaker published an op-ed at The Hill calling on the U.S. government to extradite Fethullah Gulen, an exiled Muslim cleric whose return to Turkey is an obsession for the NATO nation’s president, Recep Tayyip Erdogan.

Among the reasons that former Montana Rep. Denny Rehberg’s piece went viral is an eye-catching graphic spoofing Gulen on a Monopoly board game. The piece also gained traction because, on its surface, it gave the impression that an unbiased former member of Congress felt strongly about Gulen’s extradition.

But there’s more to the story, and it exposes some of the inner workings of Turkey’s multi-million dollar lobbying effort to fetch the 77-year-old Gulen from the U.S.

Rehberg is a lobbyist for Mercury Public Affairs, a Washington, D.C. public relations shop. And one of Mercury’s clients is Amsterdam & Partners, a law firm that handles a $50,000-a-month account for the Turkish government. Amsterdam has led the effort to expose a vast network of charter schools operated by Gulen’s followers in the U.S. Many of the allegations are listed in the “Gulenopoly” graphic in Rehberg’s piece.

None of Rehberg’s or Mercury’s ties were disclosed in the op-ed when it first went up at The Hill. Rehberg was referred to only as a former congressman who served in Montana between 2001 and 2013. 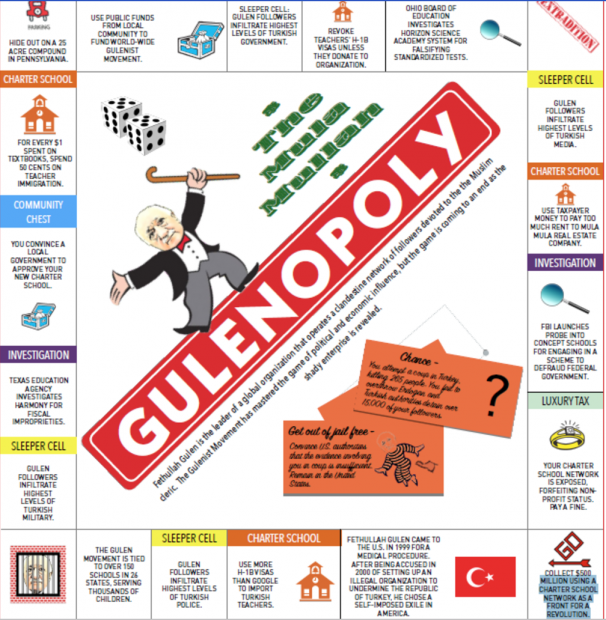 Graphic published in The Hill op-ed

The article, entitled “Resetting U.S.-Turkish Relations,” chastised the U.S. government for so far refusing the Turkish government’s request to extradite Gulen, who Erdogan has accused of masterminding a failed July 15 coup in Ankara and Istanbul.

Erdogan himself has personally asked President Obama to turn Gulen over to Turkey to face terrorism charges.

Rehberg’s article amounts to a thinly veiled threat, that the U.S. should accede Turkey’s request in order to keep its NATO ally happy.

The piece was circulated online by the heads of several pro-Erdogan think tanks and organizations. Dozens of Turkish news outlets published stories on the op-ed.

The Daily Sabah, an English-language Turkish news outlet, published a piece entitled “The GOP’s War on Gulen.” In it, Rehberg is referred to as a “Republican heavyweight,” though his lobbying ties are unmentioned. The piece asserts that Donald Trump will “likely” extradite Gulen as one of his first steps towards normalizing relations with Turkey. 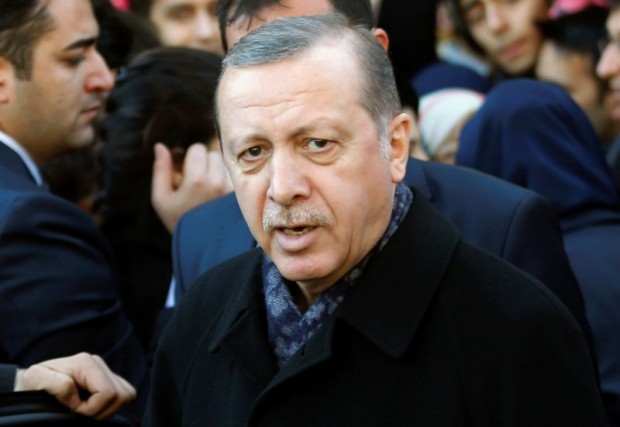 Trump has not commented on the Gulen issue, though Erdogan and others in the Turkish government have said that they believe the Republican will accommodate the extradition request.

Nailing down Rehberg’s connection was not a simple task. Neither The Hill nor Mercury were eager to discuss the matter.

The Daily Caller initially reached out to Rehberg to ask if he currently lobbies for the Turkish government. A spokesman responded to say that Mercury no longer works for Turkey or Amsterdam & Partners.

John Cpin, the spokesman, would not say when that contract ended. When pressed, he said it ended “a while ago.”

In the meantime, The Hill, after being contacted by TheDC, added a disclosure of sorts to Rehberg’s op-ed.

It stated that The Hill asked Mercury prior to publication whether Rehberg or Mercury were lobbying on behalf of Turkey.

“They are not currently,” was the response which The Hill attached to the piece.

That left the possibility that Rehberg decided to publish the op-ed on his own accord, perhaps because he had developed a personal interest in the Gulen issue. That would not be entirely far-fetched given that Rehberg was a member of the Turkey Caucus during his days in Congress.

The process by which the op-ed was pitched to The Hill would help clear that up, but its editor-in-chief, Bob Cusack, told TheDC that they do not discuss op-ed submissions.

But asked if Mercury submitted the op-ed, Cpin reluctantly acknowledged that the firm did.

Rehberg’s apparent lobbying raises questions about Mercury’s compliance with FARA, which is overseen by the Department of Justice.

Rehberg has not filed a short-form registration document that lobbyists must submit within 10 days of beginning work for a foreign client.

But Mercury has documented Rehberg lobbying on Amsterdam’s behalf in other disclosures. A semi-annual disclosure report lists Rehberg as lobbying several senators and members of Congress in May. It’s not clear why he did not also file a short-form registration. The three other Mercury lobbyists who have done work on the Amsterdam/Turkey account have disclosed that activity in a short-form registration.

And though Mercury’s spokesman says that the firm is no longer contracted with Amsterdam & Partners, a termination statement has yet to be filed. Lobbyists have 30 days to file a termination report after cutting ties with a foreign client.

As for The Hill, this is not the first time that it has published an op-ed specifically calling for Gulen’s extradition while failing to disclose lobbying ties.

In November, retired Lt. Gen. Michael Flynn published a piece at the website calling on the U.S. government to extradite Gulen. It was a peculiar article, not just because it was published on Election Day, but also because Flynn had never publicly discussed Gulen. Flynn had even expressed support for the attempted coup.

But as TheDC discovered, Flynn had been hired a couple of months prior by a Dutch shell company that was controlled by a Turkish businessman who serves as head of a business consortium with close ties to the Turkish government. (RELATED: Michael Flynn Is Lobbying For Obscure Company With Ties To The Turkish Government)

The Hill has said it does not believe that Flynn’s op-ed requires a disclosure.