Sean Spicer accused the media of lying about the crowd size at Donald Trump’s inauguration. 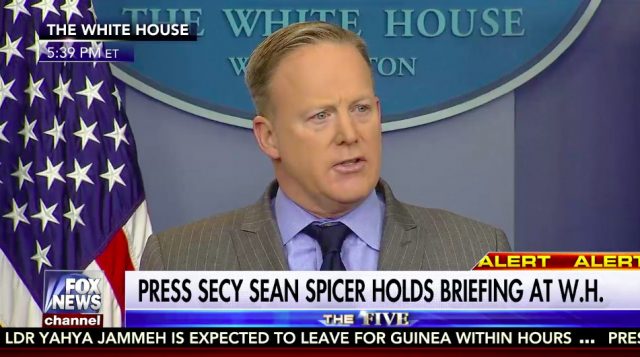 After a photo comparing the crowd sizes at Trump and Barack Obama’s inaugurations went viral, the new White House press secretary ripped reporters in a statement from the White House Saturday.

“The media was engaged in false reporting,” Spicer said. “One, a particular egregious example, was when a reporter falsely tweeted out that bust of MLK Jr. was removed from Oval Office. This was irresponsible and reckless. Secondly, photos of the inauguration proceeding were framed in a way to minimize enormous support that had gathered on the mall.”

“Inaccurate numbers involving crowd size were also tweeted,” he continued. “The national park service does not put any out, but we do know a few things, so let’s go through the facts.”

“These attempts to lessen the enthusiasm of the inauguration are shameful and wrong. This kind of dishonesty in the media is making it more default” for Trump bring the nation together.

I guess he really did “drain the swamp.” pic.twitter.com/EIFBZ5PvBu

Spicer did not take questions from reporters.