“I agree w/ Oprah #MaryTylerMoore influenced my career more than any other tv role model. She indeed turned on the world with her smile.”

“Had lunch with pals and we actually went 70 minutes discussing topics other than you-know-who. Didn’t last. Still, 70 minutes. Not bad.” — Clyde Haberman, NYT.

“Everybody either wanted her as wife, a mom, a grandma or a friend. The dictionary illustration of a million dollar smile.” — David Burge, Iowahawkblog.

“I throw my hat up in the air for you, Mary Tyler Moore. Loved her and her spirit. Rest in peace.” — Savannah Guthrie.

“Mary Tyler Moore has passed away at the young age of 80. She made a woman’s workplace into more than just a job but a fight for equality. She made us laugh and cry and her performance in Ordinary People made us look inward at our own families. But the best thing she did was smile. Mary Tyler Moore smiled and when she did, we all felt better. Thank you for that smile and making knit hats cool again. You will be missed.” — Jimmy Williams, host, DecodeDC.

“Touchy-feely tweet: call or text someone you care about tonight and tell them why they matter to you.” — Emma Roller, former opinion writer for the NYT.

“BREAKING: Chris Christie registered to vote in two states because he’s too overweight to fit inside just one.” — Michael Blackman, self-describes as someone who has written for HuffPost.

“Had an amazing time today w @dr_oz showing how thinning hair shouldn’t stop you from looking great w my @luxhairusa #wig line.” — Sherri Shepherd, who recently ranted about her gold digging ex-husbands. She might want to update her website because it says she’s still married to Lamar Sally, who has her tangled up in court for spousal support.

“I follow the news professionally and I can’t keep up with what is happening in the world. Imagine how typical news consumers feel.” — Alex Weprin, deputy media editor, Politico.

“In most cases, if you send the intern out to get coffee and he returns with McDonalds coffee, he’s fired. On the spot. Buh bye.” — Touré Neblett, ex-MSNBCer.

“Yo, @jeffzeleny, bone up on immigration policy. Obama didn’t ‘catch and release them in many respects.’ He returned them to Mexico.” — Tommy Christopher, Shareblue.

A little advice for the media…

“I get you information so you can make up your own mind-you don’t need me to tell you how to think.” — MSNBC’s Greta Van Susteren.

“Can’t make it up. Trump’s bogus voter fraud claims based on silly story told by golfer Bernhard Langer. Let’s have a massive investigation of non-existent voter fraud, focusing on blue states, because of something some golfer said.” — Ben White, Chief Economic Correspondent, Politico. 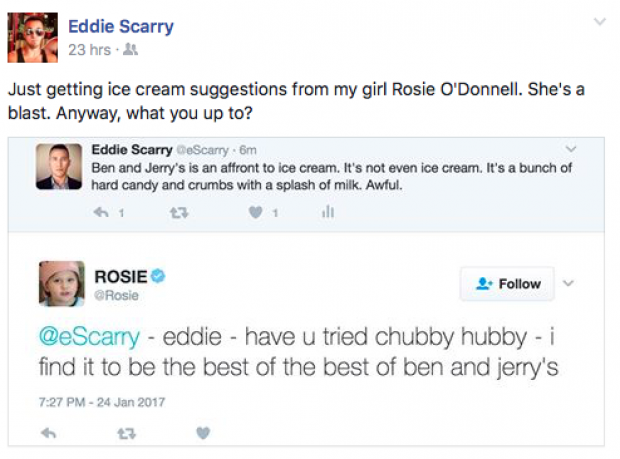