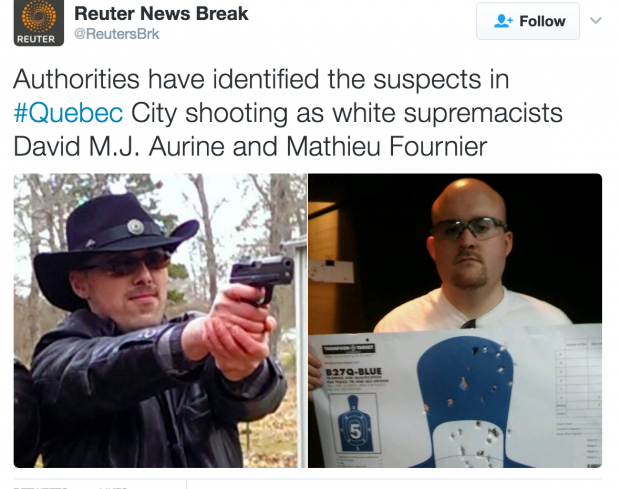 In spite of the fact that only one tweet from an unverified account provided this information, The Daily Beast cited it in its piece on the shooting.

[dcquiz] “Police said two suspects were in custody after the attack. They were identified as white supremacists David M.J. Aurine and Mathieu Fournier, according to Reuters,” read the story without an author byline.

The uncorrected version further added, “This is not the first time the mosque has suffered from a hate crime. In July, a pig’s head was left at the mosque.”

The error was left in the story for some time after Twitter users started noticing it Sunday night.

They still haven’t corrected it yet https://t.co/ULLfg4cyoI

It was corrected around midnight eastern standard time, and the piece now includes an editor’s note.

“This piece originally stated that Reuters reported the names of the assailants. However, the information came from a Reuters parody social-media account. We regret the error and have deleted the information,” reads the publication’s correction.

As of publication time, the gunmen responsible for the mosque attack that left six dead are still unidentified. An eyewitness has reported that one of the men shouted “Allahu Akbar” during the rampage.

The Daily Beast is a frequent critic of the “fake news” phenomenon and has published several articles denouncing fabricated stories as a threat to American democracy.