Hey, it happens to the best of us.

Even the skinniest among us has had an experience in which a stranger assumes a puff of clothing means you’re pregnant and asks, “Ohhh, are you expecting?”

But when a food critic — a job that presumably involves a lot of eating — gets treated like she’s pregnant, it stings.

Laura Hayes, a Washington food critic for Washington City Paper, allegedly experienced something like that over the weekend when she dined at Kingbird, an upscale restaurant in the famed Watergate Hotel.

The Mirror phoned Kingbird on Sunday and spoke with restaurant manager John Ghangir.

“Yes, we are aware,” said Ghangir, when I asked if he knew about the insults and accusations Hayes had made on Twitter. “I’m pretty sure that all the managers are aware of yesterday’s situation. It’s something that’s already being worked on. I’m sure they’ll be getting back to her in terms of either getting back to her or doing something about it.”

When asked if Kingbird plans to compensate Hayes or whether he felt her complaints were overblown, he said, “I’m pretty sure something is going to be done to make the situation less negative. I do understand her frustration. I’m not sure to be honest.”

Asked specifically about waitstaff assuming she was pregnant, he said, “I would never see our service people assuming something like that. I don’t know what to say honestly. I wasn’t there, but I do think her reaction was over the top.”

Hayes began chirping about the restaurant on Saturday morning. The reservation was for 7:15 p.m. that evening. 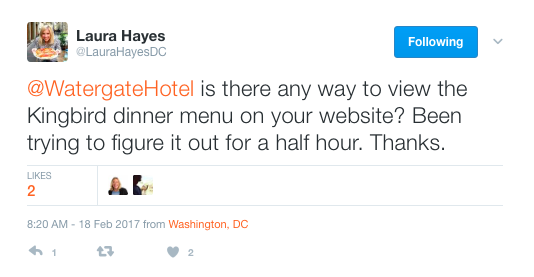 By 9:30 p.m. Hayes bellyaching had reached a fevered pitch.

She had other complaints.

One was she and her family didn’t appear to fit in. She grew bitter when the restaurant sat them at a bar table instead of in the dining room.

“We had a 7:15 reservation with my mother in law and they won’t seat us despite checking in early and spilling bank at the bar,” she tweeted. “Shoving us at a bar table now instead of anything with a view. Just so embarrassed I brought my family here.”

Another word she used for her experience: “Nightmare.”

But she wasn’t done bitching.

“Studying who gets to eat in the dining room at Kingbird @WatergateHotel,” she tweeted. “Lace, sequin, fur. Not us.”

So the other patrons are dressed better than her and her family and it’s the restaurant’s fault? They should slum it down for them?

Hayes also had expectations about the prices.

What did she expect from an upscale Washington restaurant? She whined about a $16 Jim Beam Julep. If you go to a pricy restaurant and expect Denny’s prices, you’re a fool. Zagat gave the restaurant a triple dollar sign, indicating how expensive it is. In July of 2016 WaPo food critic Tom Sietsema tried Kingbird and admitted right off the bat that he has a “like-dislike” relationship with the place. He generally liked the ambience, but found the wine prices irritatingly high. He gave the restaurant two stars.

In August, however, Bitches Who Brunch (you can guess what they do), were invited for a complimentary meal at the restaurant. Minus fish sauce that made one of the women want to vomit, they raved about the meal and the service, which they called “impeccable.” They gave Kingbird an A- score.

Another gripe from Hayes was her claim that the waitstaff assumed she was pregnant.

There was also a male employee in the women’s restroom during each of her three visits there. (Somehow three visits to the ladies room in the course of one evening seems excessive unless you a) have a weak bladder b) had too much to drink or c) are ill.)

By the way, it looks like he’s tidying things up. Would Hayes prefer a filthy bathroom? 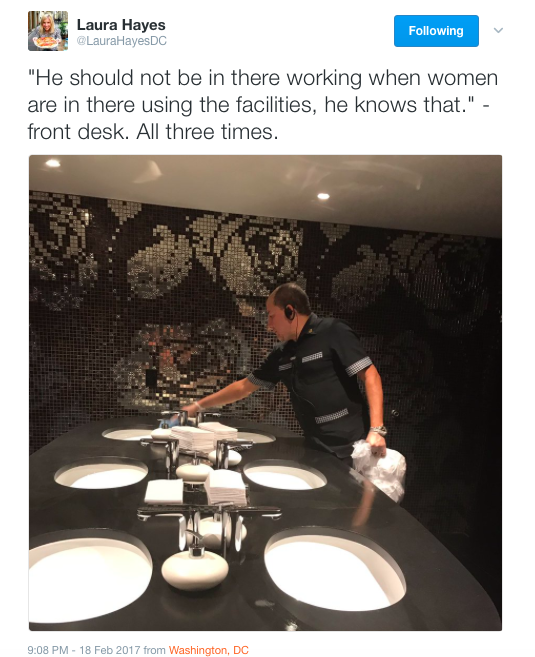 But really — was it really humiliating and unsafe? That seems a little beyond the scope of Hayes’ experience.

“I’m so humiliated I’m seeing red,” she tweeted. “I’m not with child! Took one look at my food writer belly and assumed. Humiliating. Lost my appetite.”

This is what really happened.

I’m all for fussing about a bad experience, be it dining, traveling or an Uber driver that drops you in the middle of nowhere. But this doesn’t sound like the horror show Hayes made it out to be. So she had to wait a little to be seated — it happens. Someone assumed her physique was that of a pregnant woman — did the server actually say that? She said waitstaff “gave her the once over,” which doesn’t quite build her case. They offered her a “mocktail” instead of the real thing. So what?

A man with an earpiece was cleaning the sink in the bathroom. He doesn’t look all that dangerous and from her tweets, he wasn’t a peeping tom and never behaved in a way that required police or even the restaurant’s intervention. The food critic appears to have completed her business in there without incident.

It sounds more like Hayes wanted to be treated like a princess and when she wasn’t, she whined.

Hang in there, Kingbird. You’ll survive this.