Hey, if I’m supposed to call Bruce Jenner “Caitlyn” and “her,” then you can respect this woman’s self-identity. Show some class, you bigots.

Rachel Dolezal, the former head of Spokane, Washington’s NAACP chapter who claimed to be black before her parents ‘outed’ her as white, officially changed her name to Nkechi Amare Diallo in a Washington court in October, legal documents obtained by DailyMail.com show.

Nkechi, short for Nkechinyere, is a name that originates from the Igbo language of Nigeria and means ‘what god has given’ or ‘gift of god.’

This is wonderful. What a beautiful gesture of respect for her adopted culture. I believe her truth, and I promise to lecture anybody who mistakenly calls her by any name or race other than the ones she has chosen.

Diallo has a book coming out later this month. I’m not sure which name is on the cover, but when I review it, I promise not to deadname her.

P.S. A couple of years ago, professional journalists Caitlyn Dewey and Andrew McGill created a Twitter bot to automatically correct anybody who referred to Caitlyn Jenner as “he.” 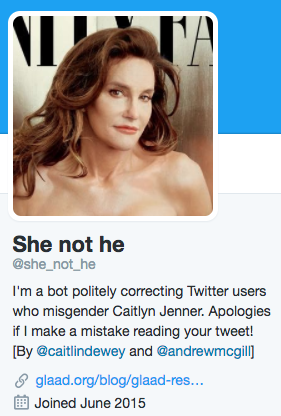 I hope somebody writes a similar bot, but to correct anyone who uses the name “Rachel Dolezal” from now on. That’s not her name anymore. That’s not who she is. She’s Nkechi Amare Diallo, and you will comply or else.