Condoleezza Rice has adopted a new perspective on the president.

Though she once said Donald Trump should drop out of the race because he didn’t have “the dignity and stature” to be president, Rice told Politico Playbook in an interview Tuesday that she “found him engaging” when the two met in the Oval Office last month.

“I found him on top of his brief, and I found him asking really good questions,” Rice said. 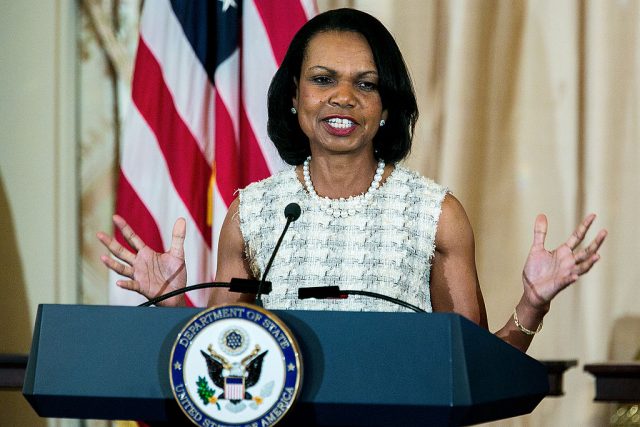 Rice, who served as secretary of state under George W. Bush, said North Korea is her biggest national security concern at the moment.

“North Korea keeps me up at night,” Rice said. “Well, it doesn’t keep me up at night anymore but if you were in those positions, it would keep you up at night. Because the North Koreans have made a lot of progress in their programs.”

“The other thing that concerns me is I want to make sure that we stay engaged in the world because the world without deep and consistent and sustained American engagement turns out to be not a very attractive place. And I know that Americans are feeling sometimes tired of the leadership but there just isn’t an alternative and if there’s anything that keeps me up at night is if we give a signal of withdrawal in any way.”

Last week, Trump said he would be “honored” to meet with North Korean dictator Kim Jong-un “under the right circumstances.” Rice called that “an overstatement.”

“The fact of the matter is he’s not going to meet with the North Korean leader unless conditions are right,” she said. “And for conditions to be right we are a very, very, very long way from where conditions would be right. When North Korea is ready to deal seriously with its nuclear weapons programs and stop threatening the world, then maybe that’s on the agenda. But it’s not on the agenda now.”

In October 2016, Rice said Trump didn’t have “the dignity and stature” to be president.

“Enough! Donald Trump should not be President,” Rice wrote on her Facebook page at the time. “He should withdraw. As a Republican, I hope to support someone who has the dignity and stature to run for the highest office in the greatest democracy on earth.”