Last night, CBS News took a break from hyperventilating about the looming Nazi menace to spend a few minutes exploring the benefits of eugenics.

And here’s how CBS frames it: 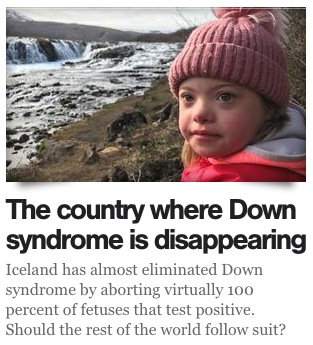 “Should the rest of the world follow suit?” I thought we answered that question in 1945.

As a lot of people have pointed out, this isn’t “eliminating Down Syndrome.” It’s killing people who have an unpreventable genetic abnormality. It’s eugenics.

If you’re an abortion enthusiast — oh, sorry, if you “support abortion rights” — you have no problem with this. You believe that some lives matter more than others. You believe that the difference between a fetus and a baby is up to the mother. You might even believe that it’s okay to kill a baby because it doesn’t have a future because you’re killing it.

You believe that a person with problems you don’t have, and that you’d rather not deal with, isn’t really a person.

So why not? After all, you’re only “ending a pregnancy with an abnormality.” It’s not as if we’re talking about a human being.

If you want more liberty and lower taxes and the freedom to say so, you’re a Nazi. But not if you want to wipe out the untermenschen to bring about a glorious, genetically perfect future. That’s where we are now.