For the last few years, I’ve noticed that Baldy the Vodka Slayer is a damn mess. But I didn’t know the half of it. Allegedly.

Once again, we see how it works: The louder the woke male feminist, the bigger the creep. Ian Miles Cheong reports:

Kai Cole, the ex-wife of “The Avengers” director and avowed male feminist Joss Whedon, has released a tell-all revealing his infidelities towards her during their 16-year marriage. She claims he cheated on her with actresses, friends, and even fans.

In the exposé, Cole described Whedon as a “hypocrite preaching feminist ideals” who used his relationship to her “as a shield… so no one would question his relationships with other women or scrutinize his writing as anything other than feminist…”

If Cole’s allegations are true, then Whedon had an unspoken power dynamic with the actresses he had the ability to fire, whose careers he could easily influence as a showrunner.

Wait a minute… Don’t feminists have a lot of complaints about men in the workplace abusing their power over women? Isn’t that evidence of our misogynistic patriarchal rape culture and all that stuff? Isn’t that the sort of thing Whedon is supposed to be against?

You can read Ms. Cole’s whole exposé here. Fans of the “strong women” in Whedon’s movies and TV shows may find it of particular interest.

If what Cole says is true, it sure explains a lot of things about Whedon’s treatment of women. Actual women in real life, that is, not the cartoon characters whose dialogue he types up. In the last few months alone, here’s a sampling of Whedon’s reactions to women who didn’t do what he wanted them to do: 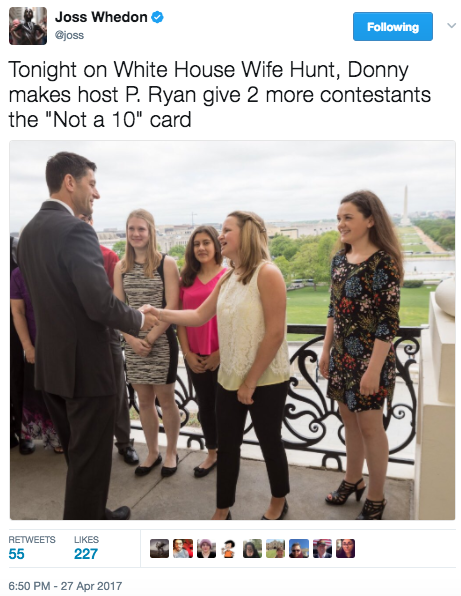 The young women in that last one are actually teenagers who’ve survived cancer. That’s what they get for allowing themselves to be photographed with a Republican.

Because that’s what a good feminist ally does, right? He humiliates women who won’t do what he tells them to do.

Planned Parenthood has been around for 100 years. Here’s to fighting for the next 100. Or even not having to. #StandWithPP pic.twitter.com/sjaqtTWBFM

Now we know why staunch feminist Joss Whedon stands with Planned Parenthood: They helped him dispose of the evidence.

No wonder Whedon hates Trump so much! It’s like looking in a mirror.

When trump says he has respect for women #internationalwomensday pic.twitter.com/kNYqEpqFvv

In every generation, there is a Chosen One. He alone can prove just how empty and hypocritical male feminists really are.